It is ‘Unity In Diversity’, not ‘Secularism’, is the most unique characteristic feature in our country. Secularism is an imported ism or philosophy. It is discriminatory in nature and is being practice a in a distorted manner. Take for instance the sermons that are given by the secular politicians or intellectuals in this country. These are mostly reserved for the Hindus only. Compare this with the attitudes and actions of the politicians and intellectuals in other countries. You will find them asking or demanding the minorities in those countries to accept and adopt the basic ideas and the common laws of their countries. May be because of this reason in America such wicked person as Osama Bin Laden has not been able to repeat again his atrocious activities. It is simply because their are no such ‘secular’ or ‘intellectual’ leaders as we see them in our country, India. These American leaders do not know any vote-banks politics and they consider nation’s interest upper most than other considerations.

The explanations and analysis that is provided to us by our secular and intellectual leaders about terrorism are quite different. They are shamelessly spreading lies or falsehoods like ‘the terrorism grew in this country after the 6 December 1992 incident’. They do not show guts or trustfulness while telling either the Muslims or Christians in this country that ‘Unity in Diversity’ is the specialty of this nation and they have to live respecting this principle in toto. It is therefore a not surprising that the slogan of national unity has remained an illusory goal because of the chameleonic policies of these political and intellectual leaders which makes the Muslim and Christian communities in this country unaware of or unrespectful to this principle.

The honorable Judges of Allahabad High Court have now pronounced their judgment regarding RJB issue after scrupulously studying all the authoritative text books of the various religions. The truth has been vindicated thus supporting the basic conviction of this land – ‘Sathymeva Jayate’. (only the truth wins.). Honorable judges have categorically stated that the disputed land is truly the birth place of Sri Rama. At the same time they have trifurcated this disputed land for distribution among the three claimants. This distribution does not stand to reason if the land is accepted as RJB. But this idea of trifurcation viewed in the background of establishing communal amity has been largely accepted by all sections of the people in the country. It is notable that even most of the Hindu leaders who were in the forefront of the RJB liberation moment have accepted the judgment with an open mind. Really speaking, both the Hindus and Muslims have won in this case; those who lost were pseudo – historians and intellectual who were propagating lies and falsehoods regarding Sri Rama’s birth place. This judgment has not only answered the objections raised by this section but also has expose a their falsification of history. These Marxists, westernized, secularist intellectuals not only went astray themselves, but even tried to misinterpret the true historical records of this country. Ayodhya judgment has revealed the lack of truthfulness of these intellectuals. The writings of these pseudo-historians and intellectuals has portrayed through out the heroic tradition of the country in a poor light and thus removed its halo. Men like Mulayam Singh Yadav have trayed to fish in troubled waters by saying that the Ayodhya judgment has given more important to religiosity than law and rules of citizenship, where by the Muslim community of the country has suffered. This openion of Sri Mulayam Singh is sufficient to prove the intellectual distortions of the so-called ‘Secularist’ in the country. By such statements surely we cannot hope to preserve the unity and integrety of the country. It is a matter of joy and hope that some Muslim organizations have asked Sri Mulayam Singh to keep his mouth shut over the issue. Such efforts of cautioning and controlling of these pseudo secularist politicians should become a general trend in the country.

On the day before to the Ayodhya Judgment many politicians and intellectuals from Karnataka had appeared in the various channels of the media in the state and had discussed varyingly on the issue of ‘Dharma’ suiting to their convenience. While quoting the saying of swami Vivekananda, K.V. Puttappa (he was a leading thinker of Karnataka), Dinaker Dasai (again an other thinker from Karnataka) they were trying to remind the people that religion is an opium. But this counselling was freely being given only to the Hindus.

The type of secular philosophy that is being advocated by our secular politicians can only increase the inter community clashes and also vote-bank politics. It can never establish communal amity.

The behavior of the people of Indonesia can be a good example for our so-called minorities. It would be better for our secular politicians to read the Indonesian history to realize how the Indonesians are behaving. Indonesia is today a Muslim country. However, culturally speaking, it is an after-image of India. The original name of the country was ‘Dweepantara’. The Indonesian radio starts its daily programs by chanting Gayatrimantra and the Vedas. After the second world war this country became independent and its president at the time was Dr. Sukarno. He was a Muslim by religion. It is said that his father was a great admirer of Karna a character in Maha Bharatha. But since Karna had joined the camp of Kauravas, the father of Sukarno had named the son as Sukarno meaning a better Karna. The wife of president Sukarno was Rathna Sarika Devi. His daughters name was Meghavathi. The arts and dances forms of this country greatly depend on Ramayana and MahaBharatha. The Consitibution of the country specifically states that it depends on Panchasheela. The motto of the country is – ‘Dharmo Rakshati Rakshitah’. Indonesia names its Airlines as ‘Garuda’. In contrast, India names its Airlines as Indian Airlines. The symbol of the Karnataka Police is mythical bird ‘Ganda Bherunda’ whereas that of Indonesia is ‘Hanumantha’ (of Ramayana) Their currency notes print the image of Lord Ganesh (the Hindu God of knowledge). But this does not come in conflict of their Islamic notions. It is said that an image of Godess ‘Saraswathi’ has been placed at the entrance of their University. Do you remember that Dr. Murali Manoharjoshi when he was the Central HRD Minister had organized a conference of Education Ministers of all the states in the country, in New Delhi. When that conference was begun by saluting ‘Saraswathi’, most of our Education Ministers, including a good mannered person like Sri Govinde Gowda, the then Education Minister in Karnataka had walked out in protest against the salutation. Is this not a good example of the destortion in our concept of secularism? When the question is asked to the Indonesian Muslims about their Hindu practices, we get an interesting answer. That answer given by them would be – ‘We have changed only our religion but not our fore-fathers’. Is there a better example for communal amity than this belief and behavior of these Indonesian Muslims? The question therefore araises as to where-from the fore-fathers of most of our Muslim and Christian communities in our country have come? Which is their original country?. When it is said that these Muslims and Christians are the ‘sons of the soil’, it is obvious that their fore-fathers were Hindus only. The Indonesian people proudly claim that Sri Rama is their hero and also that both Ramayana and MahaBharatha took place in that land only. While this is so, there in Indonesia, in secular India where Hindu people are in majority, the Rama’s existence is been questioned. There are people who sarcastically ask the question of Sri Ram’s date of birth. There is a foolish chief Minister in a state who ask the question who was the engineer who built the Ramasetu (Rama’s Bridge) in Tamilnadu. Obviously, this shows the ‘Secularism’ in this country in a very poor light.

We have to note that this Ayodhya judgment has very clearly exposed the distorted and slavish mindset of our so-called intelligentsia who are propagating the false hoods as true and are weaving a wrong version of Indian history. It is therefore, an urgent task for us reviewing and rewriting the Indian history from an Indian point of view.

If the minorities of this country insist on taking their religious instructions from countries like Pakistan, Afghanistan, Italy or Rome why not they also accept the example of the people of Indonesia, who while accepting the theology of Islam, also have respect for their fore-fathers and their national symbols to promote inter communal amity in this country? We have to think on this issue. If we hold on to the opinions that ‘our beliefs only are true and our God only is the Great’ then that will make us more dogmatic but that will never teach as the art of living together. We all have to ponder over this question seriously.

(Translator’s note: The Allahabad High Court’s verdict on the vexed controversy over the issue of RJB (Ram Janma Bhumi), apart from its other fall – outs has probably led to a new trend of thinking among the both majority and minority communities. This trend is a positive and a constructive approach with regard to the various issues that are undermining the most imperative need of the country – viz inter communal harmony. Our society had suffered cleavages and dissensions and even inter-communal riots as a legacy of the erstwhile British rule. The British had played a ‘Divide and Rule’ policy and had promoted the struggle between the majority community (The Hindu) and various so-called minorities. This legacy was inbuilt into the post-independence politics that has marred our country in general and polity in particular. The RJB controversy is one of the glaring examples of that destructive policy. It had led to a number of inter-community clashes and also a long fight in the various courts of the country. The recent judgment by The Allahabad High Court has shown a solution to the controversy, but has also opened the gates of reconciliatory tasks between these communities. Some sensible and sensitive thinkers belonging to all communities have started expressing their new thinking on inter community relations, which if probably continued, would read the country into a land of amity and peace.

An article by Sri Dany Perera that has been published in the most prestigious and popular daily of Karnataka – ‘Vijaya Karnataka’ (20-10-2010) is an example of this positive fall-out of the Allahabad High Court. The article is in the local language Kannada and it’s English version is being provided to the leaders of different regions of the country, with a hope that it further triggers the positive trend of thinking that has recently set in. Sri Perera is a Christian, Social worker, working specially in a rural setting in the Hassan district of the state.

"Jai Hind!, and long live the partnership between India and US": Obama addresses Parliament

Tue Nov 9 , 2010
” Mr. Vice President, Madame Speaker, Mr. Prime Minister, Members of the Lok Sabha and Rajya Sabha, and most of all, the people of India. I thank you for the great honor of addressing the representatives of more than one billion Indians and the world’s largest democracy. I bring the […] 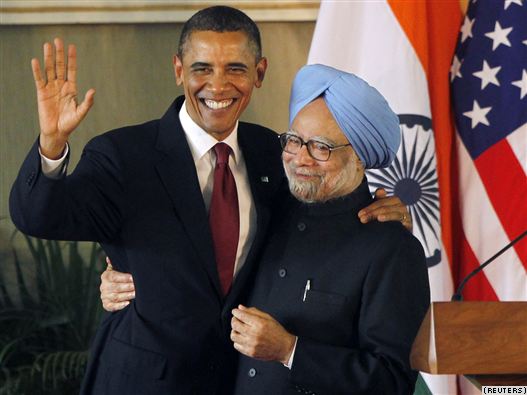