Arasikere town saw a wonderful gathering showing their integrity for the issues raised by RSS-VHP unit Hanumath Shalkti Jagaran Samiti here on Sunday. The gathering, Hindu Samajotsav was organised as a part of mass campain in 3 core issues related to Aydhya Ram Temple construction, The Kashmir imbroglio and to oppose the conspiracy of Hindu Terrorism by some short sighted politicians.

The gathering was addresed by Sri Muniyappa, state convenor of Dharma Jaagaran, an organisatiuon dedicated for creating awareness. He called for a united opinion amongst Hindu Society to fulfill the dream of Constructing Ram temple at Ayodhya. the Hindu Samajotsav was focussing these 3 following core issues.

“The struggle for reconstruction of Ram temple at Ayodhya, continuing from last six centuries, has taken a new turn today. Allahabad High court has reconfirmed the disputed site as the birth place of Sri Ram in its verdict. Despite the availability of thousands of documents supporting the claim of Hindus, political leaders of the Indian Government are delaying honouring of truth and justice.  To fulfil the wishes of people, resolve of Saints and sacrifices of devotees of Shri Ram in the struggle, a magnificient temple at the birth place of Ram should be built.  This is possible only when a strong public opinion is formed in favour of the temple” Muniyappa opinioned.

Speaking on Kashmir issue, Muniyappa said “Kashmir is an integral part of India. Along with the present Jammu and Kashmir state,  Pakistan Occupied Kashmir (PoK) and Aksai Chin which is in the control of China also belongs to India. Every Indian considers Kashmir as part of India justly because of thousands of years of cultural relationship. Still, because of conspiracy of Pakistan, intolerance of Islamic fundamentalists and because of lack of political resolve in India, people of Jammu and Kashmir are suffering. More than 7 lakhs of Hindus have been driven out of their homes. They are living as refugees in their own country. Kashmir women are facing credible threat to their hounour and life. Thousands of temples in Kashmir have been desecrated. The terrorism of Kashmir valley is spreading to Jammu and Ladakh. Present Indian government is showing signs of surrendering to the terms and conditions of separatists. . Awareness about Kashmir has to increase. India should not expect others to solve its problems. Kashmir problem is the problem of every citizen. Only when all of us pledge our support in a single voice, there is a hope for a just solution for the resolution of Kashmir problem.”

“Shortsighted Indian politicians who are eager to consolidate Muslim vote bank for their political future have initiated a smear campaign labelling Hindu organizations as terror organizations. Those Hindu opponents who had targeted Baba Ramdev and  Kanchi Pontiff are now leading the false campaign against RSS.  This attempt, to link RSS which is spearheading thousands of social initiatives, with the globally acknowledged evil of terrorism,  is aimed at weakening the morality of Hindu organizations. In this context, Hindu organizations have determined to face this onslaught in a democratic way.  Opposition to this conspiracy by all just loving people has become a requirement of the day” he added.

the Hindu Samajotav had a huge gathering in  thousands. A procession was also arranged drawn the attraction of the Citizens of Arasikere.

Sun Dec 12 , 2010
It was a saffron flow in Garden City today evening as thousands of  people gathered to witness a mammoth Hindu Samajotasv at Malleshwaram play ground organized by Hanumath Shakti Jagaran Samiti, an Unit of RSS-VHP. Addressing this massive audience Senoior RSS functionary Su. Ramana condemned the conspiracy of coining the […] 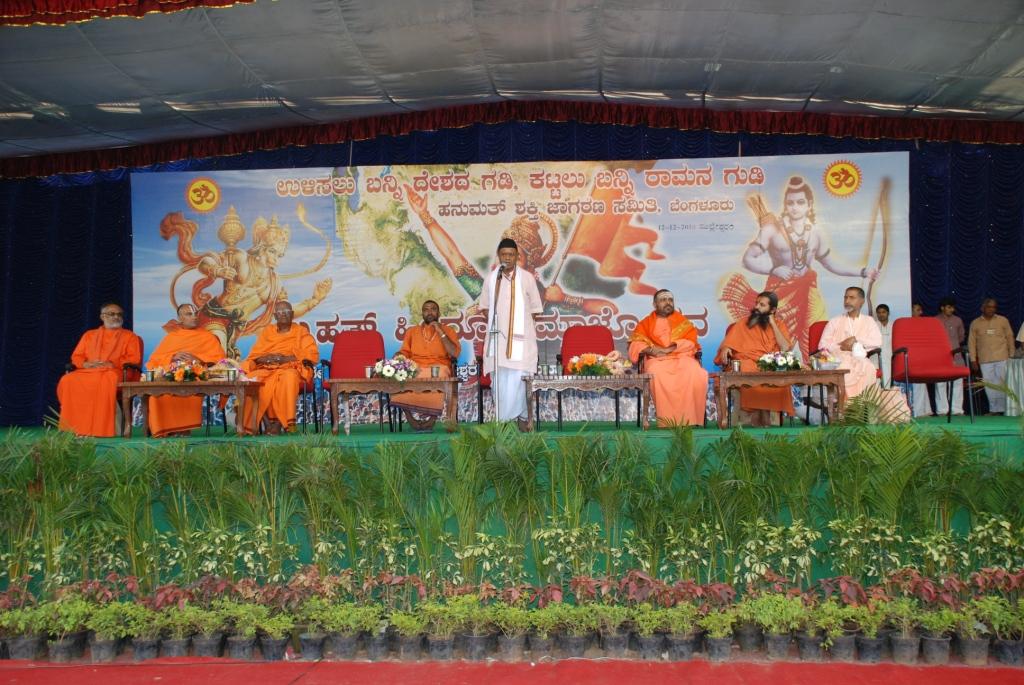