Skip to content
Mysore today witnessed a huge gathering of hindus at townhall premises on the occasion of hindu samjotsava which was organised as part of ongoing hanuman shakthi jagaran yagna.Speaking on this occasion, Dr Prabhakar bhat,RSS prant karyavaha gave a
clarion call to all hindus to get united for the sake of saving kashmir and building a huge temple at ayodhya. Speaking on Ayodhya issue,he told that the disputed site was the birth place of Sri Ram lalla and a huge temple would be built on the site to give a befitting reply to the atrocities carried out by the muslim agressors.
He outrightly shunned the attempt by the UPA government’s misdeamnour of adding saffron color to terrorism. He unequivocally said that no hindu can be a terrorist and no terrorist can be a hindu and called the efforts of the UPA government to smear saffron color to terrorism as an unpardonable sin. He condemned the UPA general secretary Rahul gandhi for comparing patriotic organisation like RSS with  the banned muslim outfit SIMI. He opined that Rahul Gandhi needed the help of psychiatrist which was supported by the attendees with a huge applause.

Dr.Bhat lamented for the situation of hindus who according to him are treated like second citizens. He reminding the gathering of the
torture undergone by the hindus on the fateful day of partition. He warned people to be united and not to succumb to the vote-seat-note politics of the psuedo-secular political parties.

Sri Sri Trinetra Mahant Shivayogi Swamiji of Durdundeshwar mutt, padavapura and Sri Eshwargiri Swamiji of Hebbal were
present on the occasion and blessed the gathering with their divine presence.
VHP vibhag sanchalak Muralidharan welcomed the gathering, Sri Nagalakshmi recited a Devaranama,Dr.Chandrashekhar
coordinated the whole program while B.J.Sathish of youth for seva read out the vote of thanks.

Before this, A huge shobhayathra was flagged off by Sri Chidananda Swamiji of Hosamutt and Dr.Vaman Rao Bapat, Mysore vibhag
Sanghachalak this morning which managed to pull hundreds of enthuistic participants. hundreds of men and women walked with
omkara flags and shouted slogans for a huge Ram temple at ayodhya. A tableau with a huge hanuman photo was also part of this attractive shobhayathra.

Sun Dec 19 , 2010
Bangaore South today had an inspiring evenning as thousands of citizens gathered to witness a mammoth Hindu Samajotsav at Shalini Grounds at Jayanagar 5th block. RSS Karnataka South Karyavah Dr.Prabhakar Bhat addressed the event, throughout  the speech he criticised all attempts by few short sighted politicians to dimnish the image […] 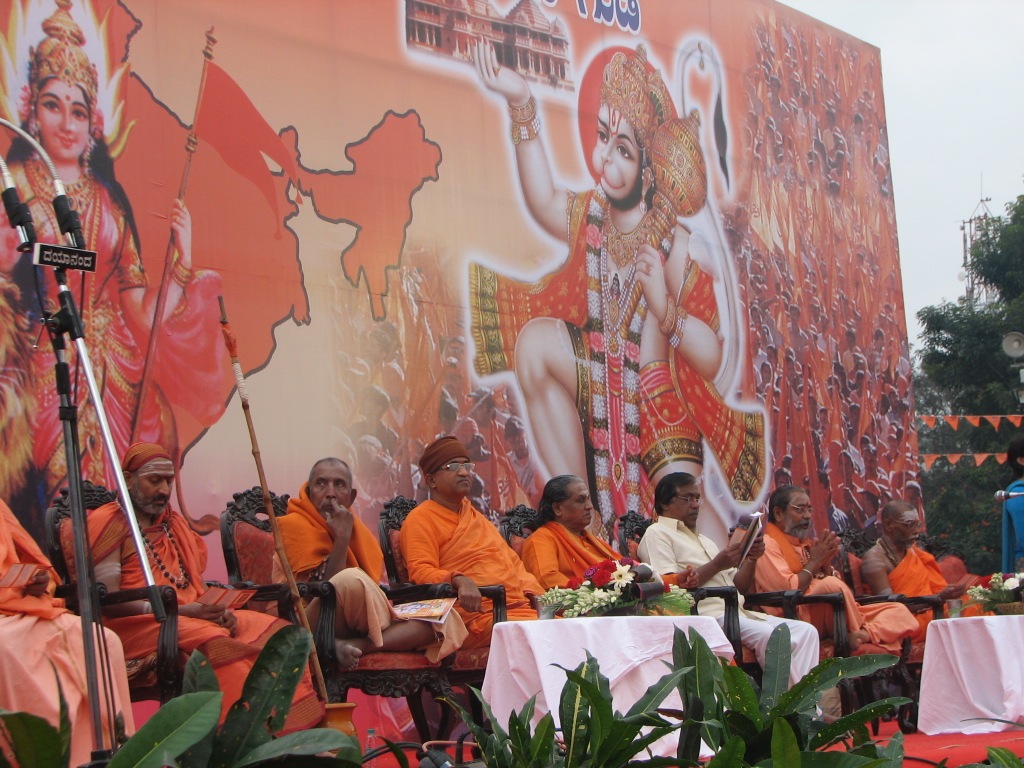