The following  dignitaries  were present on the dias. 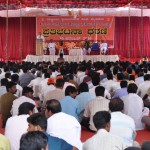 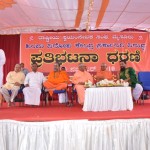 Dr Bapat ji introduced the guests to the audience followed by ‘ vyakthika Geethe ‘ by Sri Padmanabha.

The stage was well set and the participants were disciplined and squatted on the floor. Five hundred chairs were also provided. Sri V Nagaraj gave an invigorating speech for about 40 minutes and the participants listened to him with rapt attention. Slogan shouting went on inbetween speeches and placards were displayed with enthusiasm when the media focussed their cameras.

Later the Protest letter was read out by Sri Keerthi and signatures were also taken by quite a few.

Ma Venkataram Ji spoke finally about commitment towards the cause and the future task ahead of us. Sri Sripathy A, proposed the vote of thanks. Food was served (only Vegatible Bath) to all the participants.

The Protest letter was taken to the DC by a select few and to our surprise the deputy commissioner was standing at the door waiting to receive the letter. 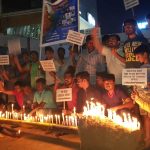 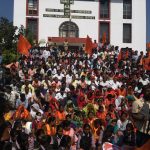 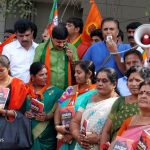