Bangalore: It was a day pride and honour for officers,JCOs and other military Station , Bangalore,when a new colony was named after a martyr on Friday. The colonel Vasanth Venugopal Enclave(Married Accommodation Project Phase I) was inaugurated by Lieutenant General B K Chengappa , the general Officer Commanding (GOC) Andhra Pradesh, Thamil nadu ,Karnataka and Kerala (ATNK&K) in the presence of Subhashini Vasantha Venugopal. Col Vasanth Had laid down his life while fighting terrorists in Jammu and Kashmir in 2007 and was posthumously honoured with the Ashok Chakra.

Cancum (mexico):  This year is set to be among the three warmest since records began in 1850 and caps a record warm decade that is a new indication of manmade climatic change the United Nations said. The temperature have already risen by about 0.8 degree Celsius globally, since pre industrial terms. The WMO said the warming had been especially strong in Africa, parts of Asia and Arctic. Pakistan hit by devastating floods, recorded a record temperature of 53.5 degrees, the warmest in Asia since 1942

Crime pays at least in one sense. The money that prisoners make for the jails and for themselves by producing goods for the sale collectively runs into crores. The quality of their work is comparable to the best in the world outside.  But more importantly, what can a convict learns to do within the confines of the jail is what might finally redeem him once he is out in the open.

Sericulture was introduced in Salem central prison in 1999. Today about 25 convicts are involved in the production of silkworms. The jail authorities are so impressed by their skills that they now plan to expand the cultivation.

In Sabaramati central Jail, Ahmedabad, Ganesh Daveji Takoor 38, feels that he has redeemed his soul to some extent. His hands which once snuffed out a life, now mix am floor with fenugreek leaves and chillies to make delectable bhajiya. He is credited with the devloping  recipes for the much in demand super successful bhajiya, which is now made by other inmates as well.

Varanasi : A 10-month lull after the pune Best Bakery blast was shattered on Tuesday when terror returned with a low-grade explosion at the evening Ganga aarti in Varanasi that left a one-year-old girl dead and over 20 persons injured, at least three of them foreigners. The crude device went off at 6.40pm at the old Dashashamedh Ghat just as the aartiu had begun.Mercifully, the crowd was thin for the popular aarti on Tuesday as the city was already under a red alert because of the Babri Masjid demolition anniversary had fallen a day earlier.

5. Indians No.2 in emigrating

Top In Sending Money Home; India No.10 In Attracting Immigrants

India continued to be the largest recipient of remittance in 2010, with the figure rising from $49.6 billion in 2009 to $55 billion. It was the country with the second largest number of emigrants (those migrating abroad) after Mexico, according to the World Bank’s just – released Migration and Remittances Factbook 2011.

6. Yoga, a sure shot to melt obesity

Bangalore: If you are tried blowing up huge sums of money at posh gyms, you might want to spend time practising the traditional art of  yoga to deal with obesity. It is common knowledge that yoga helps maintain fitness, and this year around, the world Ayurveda Congress 2010 in Bangalore will present a study to prove that yoga is effective in dealing with obesity in women in the age group of 30 to 40 years.

New Delhi : One of the American diplomatic cables made public by the whistleblower Website WikiLeaks has disclosed that Lashkar-e-Taiba made elaborate plans in June last year to assassinate Gujarath chief minister Narendra Modi.

The RBI on Wednesday said it would issue new Rs.5 coins to commemorate the birth century of Nobel laureate Mother Theresa. The coins in memory of the founder of  Missionaries of charity would be circular and have a diameter of 23mm.

Show Indira’s Democracy was suspended on one Person’s perception

New Delhi: Six months after Pleading ignorance about their whereabouts, the National Archives has come up with Records of the infamous emergency. Tell tale gaps in the information though could well have been responsible for the delayed disclosure about a phase that the present rulers have much to be embarrassed about.

Srinagar: An Army captain, Upamanyu Sing injured in an encounter a day earlier at Sopore in north Kashmir’s Baramulla District, succumbed to his injuries on Wednesday. He was the fifth army captain to be killed in 2010. An LeT terrorist-Ubaidulla bhai – was also killed in the gun battle.

Srinagar: Alleged hardline Hurriyat supporters on Saturday torched a school bus in a desperate bid to enforce a shutdown call in Srinagar’s Khanyar area. The attack is seen as an attempt to force Kashmiris, resenting repeated bandhs,indoors.

Sun Dec 12 , 2010
Arasikere town saw a wonderful gathering showing their integrity for the issues raised by RSS-VHP unit Hanumath Shalkti Jagaran Samiti here on Sunday. The gathering, Hindu Samajotsav was organised as a part of mass campain in 3 core issues related to Aydhya Ram Temple construction, The Kashmir imbroglio and to […] 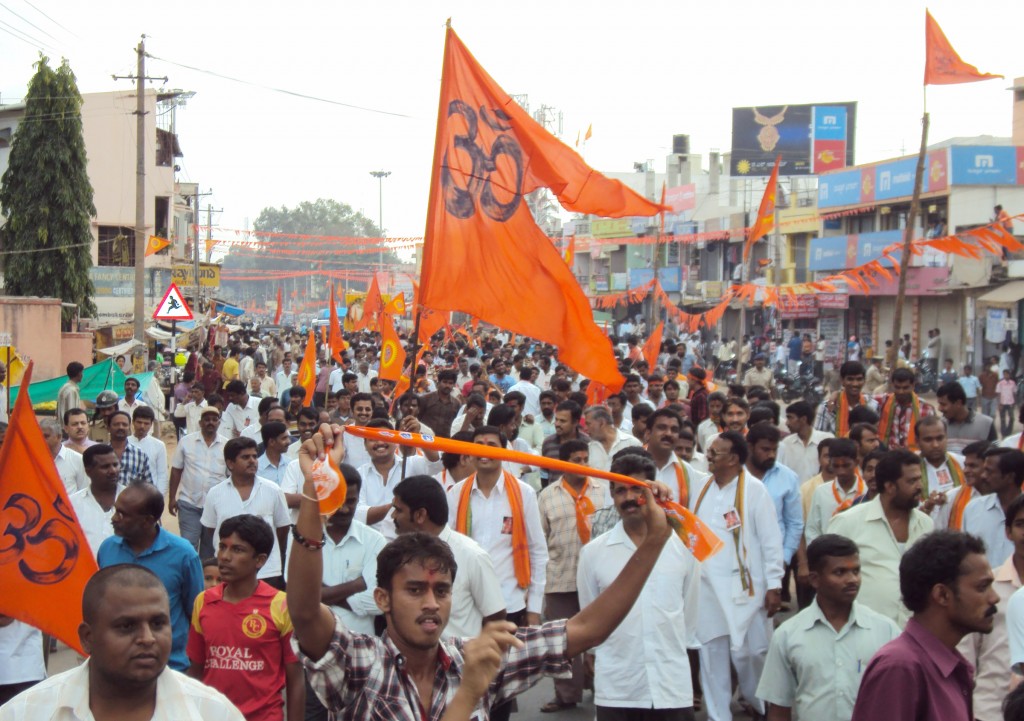