Speaking to a select audience Mohan Bhagwat said “the remembrance of glory of our country twice in an year during independence day on August 15 and republic day on January 26 is becoming part of our social life these days. Though it is a happy and good approach in a healthy society, it should not be mechanical.  We need focus on the real importance behind these celebrations.”

“Even after 63 years of independence, our nation is not out of external & internal problems. Our Prime Minister in his speech listed several issues which are disturbing national integrity. Lack of unity amongst all is also a problem. Kashmir is burning and the exact problem there is not yet specifically pointed out. Border infiltration also causing a major threat. Though people are independent they need to focus more on self-discipline (Anushasan) to make a society which is highly healthier.”

“Meanwhile one has to understand the meaning and importance of the term ‘swathanthrya’a and what ‘swa’ stands for? What is the importance of tricolor and Ashok chakra or dharma chakra in represented in national flag? Saffron represents sacrifice (thyaag) and knowledge (jnaan); white for peace (shanti) and purity (nirmalata) and green symbolizes prosperity(samruddhi). A nation requires all these 3 aspects equally from every citizen hence one need to focus on the self-contribution to the nation in these 3 aspects in each sector of life.”

“We became independent in 1947. Rulers were changed. Now we have democracy and we are republic. We got independence to make our society stronger and prosper in every aspect. Our works and duties should focus on overall prosperity of the nation. To bring all positive changes required to make our country superior and stronger; all of us should think and work towards it” Bhagwat opinioned.

Thu Aug 19 , 2010
Hundreds of people killed and thousands are missing and numerous injured in worst ever cloud burst and flash floods in Leh which caused unprecedented destruction in the entire district in general and Leh town in particular. In adverse conditions, Volunteers of Sewa Bharati and RSS have started all-out rescue and […] 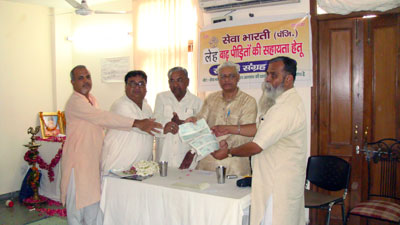