The Akhil Bharatiya Karykari Mandal feels immense pleasure on reverential remembrance of Mahamana Pt.Madan Mohan Malviya ji, born on the Paush Krishna Ashtami Vikram Samvat 1918 (25 December 1861), on his 150th birth anniversary. Malviya ji was a great patriot, freedom fighter, renowned educationist, editor of several newspapers, skillful lawyer, eloquent orator and munificent donor. The great cow-devotee, the moving force for building temple at Shri Krishna Janma Bhoomi and founder of the Banaras Hindu  University, Malviya ji got established gau-shalas, pathshalas and Mumukshu Ashrams at several places. Malviya ji started his political voyage by leaving the Kolkata conference of the Congress spell-bound by his speech at the age of 25. He became the President of the Congress four times and led the Hindu Mahasabha for twelve years. Gandhiji has always held him in high esteem as the ocean of knowledge and as his spiritual mentor. Compelled to adopt the career of teaching on completing the 10th standard of education, he adorned education with the golden aura of Hindutva and had been the Vice Chancellor of the Banaras Hindu University for 20 years. The perceived objective of the Mahamana in establishing the university was to integrate dharma and ethics as an inseparable part of education for moulding the character of the youth. He strongly believed that dharma is the sole basis of character and source of bliss in life. For this purpose, he emphasised on Sanskrit teaching and established the tradition of discourse on Geeta, which is continuing uninterrupted till date. The motto “Hindunaam Maanvardhanah” written on the entrance of the Kashi Vishwanath temple built in the Banaras Hindu
University was his sole mission in life.
The second Sarsanghchalak of Rashtriya Swayamsevak Sangh, revered Shri Guruji had been a student and teacher in this university. He was blessed with the proximity and affection of Malviya ji at that time. It was with the benediction of Malviya ji that the office of the Sangh could be established in the university campus and the Sangh-karya continued to get his blessings.
It was a unique and rare combination in him that he was a political leader of mass acceptance, together with being a widely respected educational luminary. To redeem his resolve to serve the cause of education and social-service he renounced his well established practice of law in 1911, for ever. In order to follow the tradition of Sanyaas throughout his life, he pursued the avowed commitment to live on the society’s support.
But when 177 freedom fighters were convicted to be hanged in the Chouri-choura case he appeared before the court, despite his vow and got acquitted 156 freedom fighters.
While considering the so called untouchables and indigent of the Hindus as the integral part of Hindu Society and to give them respectable place, he continued to endeavour successfully, to arrange for their Mantradeeksha and education, inspite of opposition from obscurantists. By virtue of his intimate relations with Dr.Ambedkar and credibility, he succeeded to seek his consent on the Poona pact .
His commitment for Swadeshi, reflected in his explicit faith in indigenous products, thought, practice, language and industry was also visible in his devotion for our cultural values. Malviya ji had strongly opposed the obstruction of the flow of Ganga from Gomukh to Gangasagar and the British government had to restore the uninterrupted flow of Ganga.
Totally opposed to the politics of appeasement, Malviya ji had oppose the separate electorates for Muslims under the Lucknow Pact of 1916 and also opposed the participation of Congress in the Khilaphat movement in early 20’s. Giving his clear verdict against the division of the country, he cautioned Gandhi ji against bargaining for freedom at the cost of division of the country.
His compassionate heart lacerated at the news of horrifying violence against Hindus, in 1946 in Kolkata and Noakhali. He urged the Hindus to counter the oppressors by organizing against them. This very grief was the cause of his demise. Instead of aspiring for Moksha on his demise, he wished for rebirth for the sake of nation and university.
In brief, in spite of being into politics he was above politics. He was explicit proponent of dharm, stood against the obscurantism and was supporter of cultural values in life. He was propounder of Swadeshi and committed for self-reliant Bharat and was strong advocate of reinterpretation of ancient scriptures in light of contemporary needs. He was deeply devotional and away from parochialism. He was a royal beggar for the social cause and munificent donor in the personal life.
The ABKM calls upon the central and state governments that while, celebrating the 150th anniversary they should reintroduce his biography in the curricula as it existed earlier and should restore the originality of the Banaras Hindu University which was established by him on the basis of the Hindu values and ideals..
The ABKM pays humble and heart-felt homage to Mahamana Madan Mohan Malviya ji and calls upon the Swayamsevaks and the countrymen to commit to mould the new generation by drawing inspiration from the noble and intensely active life of Mahamana and follow the Hindu values as reflected in his articles, speeches and life episodes, in personal life and establish these in the social life.

Sun Oct 31 , 2010
The Akhil Bharatiya Karyakari Mandal sincerely believes that remembering the great poet Ravindranath Thakur's life and thoughts is most pertinent today for reviving the conscience of the society. 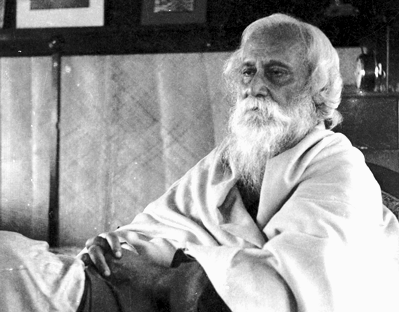