56th National Conference- Akhil Bharatiya Vidyarthi Parishad has been organizing its National Conference every year at different parts of our country.This year the 56th National Confernce is being conducted in the Graden City of India-Bengaluru on 25, 26, 27,28th Dec. 2010 at Bengaluru University’s National College Cricket Pavilion Ground. Students gathering of almost 10,000 along with teachers,educationists from Kashmir to Kanyakumari will be participating in this conference. The venue of the conference is named after Sir M.Vishveshwaraiah and the Dias is named after Shri. Nanaji Deshmukh.

Inauguration – The conference will be inaugurated at 11am on 26th December 2010. Thousand of old ABVP activists who have been serving the organization and the society from last many years will also be participating in the conference.

Exhibition – An exhibition with photos depicting the different programs, agitations, rallies, movements of ABVP done all over the country will be inaugurated on 25th Dec.2010 at the conference venue. The exhibition will also include photos depicting various curruent problems of Kashmir separatist movement, commercialization of education barbaric naxalism, and inhuman terrorism etc which our country is facing. The exhibition venue is named after Pt.Madanmohan Malviya. Students Meet at Conference- Thousands of students from various national institutions like IITs, IIMs, IIScs and from various courses like management, engineering, medical, para-medical, fine arts, journalism, MSW etc will be participating in the conference. Prominent personalities already serving the society from years will be guiding the participating students in a special session about their role in National Reconstruction and the need for social responsibility at this very age. Two separate sessions are also arranged for the 2,000 girl students participating.

Public Meeting and Procession – A grand procession is arranged on 27th Dec wherein the 10,000  participating students of different states in their traditional dresses will be exhibiting the diversity of our culture. The procession will start from the conference venue and end at the National College, Basavangudi with a public meeting where the student leaders from different parts of country will address the huge gathering on various topics like terrorism, naxalism, commercialization of education.

Yeshwant Rao Kelkar Youth Award Presentation- ABVP from 1990 has been awarding different youth personalities serving the society across the  barriers of poverty for the upliftment of the downtrodden to make Bharat a super power in the name of Prof.Yashwant Rao Kelkar who played vital role in the development of ABVP from its initial days.

This year this award will be presented on 28th Dec to Anandkumar of Patna, Bihar, who from last 3 years has been helping the poor students who are deprived of education, food shelter by providing them the same free of cost. He chooses 30  such deserving students and trains them for IIT.Most of his students have made it to IIT and are working in different prominent business organizations. He is known as Super 30 and has been an idol for the youth of our country.

2 thoughts on “56th National Conference of ABVP in Bangalore” 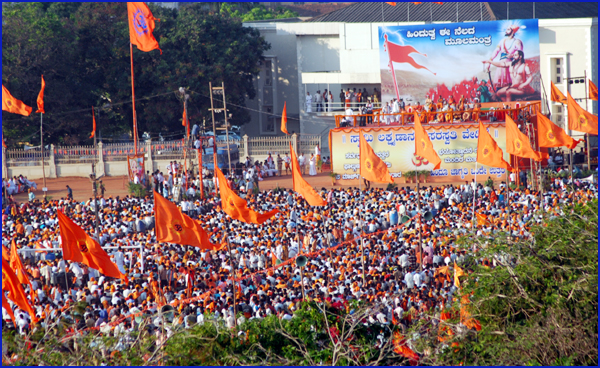