Bengaluru University Vice Chancellor N Prabhudev said the Chair was set-up to encourage research on labour issues and to submit a vision document to the government. Some of the areas to be studied are child labour, labour laws, labour markets, etc. Reports would be submitted to the government for implementation, he said.

The Chief Minister said the Chair was the second in the country for labour studies after VV Giri Chair in Noida, and the first in southern region. He pointed out that he has allocated Rs one crore in the previous budget for the Chair. If required the government would increase the allocation to Rs five crore. The main intention was to help improve the condition of labourers, a dream of Alampalli Venkataram. He recalled Venkataram’s association with the RSS and pointed out that he had good relations with organisations, leaders and those subscribing to other ideologies.

Legislative Council Chairman DH Shankaramurthy said the incumbent of such a Chair should focus on training labourers on various aspects. Higher Education Minister, Arvind Limbavali suggested that the studies on the plight of those working in software industries and affiliated sectors, including cab drivers, who have to work during odd hours to suit the timings of their clients, must also be made. Leaders from different labour unions attended the programme.

He devoted his entire life in the cause of workers welfare. In his demise the working classes of Karnataka have lost a leader who empathized with their causes. Alampalli Venkataraman passed away on January 18, 2009 at Bangalore.

RSS says Ayodhya reconciliation should be within legal framework

Tue Oct 5 , 2010
Sarakaryavah Bhaiyyaji Joshi speaks JAIPUR: Stating that the RSS will not be a party to the Ayodhya case if it comes to the Supreme Court, its general secretary Suresh Joshi on Monday said that any reconciliation process in the case should take place within a legal framework. He was responding […] 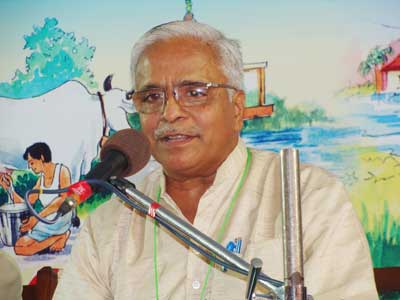