The recent political developments in Karnataka are disappointing to all those having a social concern. Those anticipating a good future for the country have been disappointed by the leaders of all political parties who have been acting as if corruption, immorality and horse trading are the inevitable features of politicking. Being a Swayamsevak of Rashtriya Swayamsevak Sangh, I feel that there is an urgent need for responding to this situation. There are two reasons: firstly, among the rulers of this state, there are some who have contacts with the Sangh. The common men measure their activities from the point of view of the Sangh too. Secondly, there is no mechanism in RSS to publicize its internal discussions. I’m writing this article thinking that it would be better to share such views (for the second reason) since I have close contacts with the senior activists for the past many years. The Sangh does not agree all the activities or resolutions of the BJP party and the government in the state either ‘in principle’ or ‘in practice’. The Sangh opposes corruption, horse trading and unethical decisions. Just like the Sangh activists welcome the prohibition of cow slaughtering, they oppose the SEZ. Just like the seniors of the Sangh appreciate those MLAs who do not earn a single paise for their own despite their various terms, they express their anger towards those who are corrupt. They even convey their disappointment to such persons in strong words.

What is the use in just expressing anger? Some actions should be taken- this is the stand of many people. Change within oneself is the way the Sangh adopts to bring changes in its Swayamsevaks. May it be the efforts to root out the caste system or corruption, change within oneself is the ultimate solution. Many Sangh leaders work from this point view for the past many years. This effort continues despite the fact that there is BJP government in the state or not.

Lakhs of Swayamsevaks have passed in first class after they learn about good conduct, ethics and social concern in the university of Sangh, but at the same time, there are people who have ‘failed’ utterly in the social life. In such cases, self-effort by these people is more important than the support of the co-Swayamsevaks. We should not forget that those whom the common men perceive as ‘clean’ in the present state cabinet are all the Swayamsevaks of Sangh.

Many people talk about the frequent visits of the BJP heads of the state to ‘Keshavakripa’, the RSS office in Bangalore. Hence, they ask why you can’t question such fellows. Yes, the Sangh expresses its opinion with those people in accordance with its ‘stands’ mentioned above. Many a time this message is conveyed in strong words too. It is not proper to deny entry to anybody to Keshavakripa. The doors of Sangh office are wide open to people from all classes and sectors of the society any time. It is a regular feature that not just the BJP leaders, but also the leaders of other political parties, those who do not agree with the principles of Sangh, intellectuals, litterateurs and social activists- hundreds of people visit the office every day. Being a social organization, the Sangh cannot close its doors to anybody. Still, the Sangh has informed people concerned recently that it is not appropriate to visit the Sangh office only to discuss the ‘political strife’ with a note that it would lead to the opinion that Sangh has its nod to all the activities of the BJP. (There is another issue here: Some people visit the Sangh office or not, it does not make any difference in the moral responsibility of the Swayamsevaks. It is not their meeting with the Sangh leaders inevitable at least to caution them on their acts?)

Now, the matter of Sangh ‘taking any action’: all those who know about the functioning of Sangh, also know the relationship between Sangh and different organizations. May it be matters related to the policies of the organizations, or to the individual behavior, the activists of the organizations themselves rectify the mistakes and think about the social health. The advices of Sangh should be implemented by those people holding responsibilities in such organizations. For example, when the Sangh leaders advised the BJP to bring youngsters to the key positions of the party, it selected Nithin Gadkari as its national president. Similarly, the Sangh has been pressing its Swayamsevaks in the BJP to give an administration free of corruption, in accordance with the culture and values and to build a party with persons with good conduct. It is their responsibility to implement them. (Selection of the president is an internal and organizational process of an organization. But issues like corruption and government policy is a vast subject that depends on the mentality of the present-day society. A corruption-free administrative system will only be a representative of the society, but cannot originate from the zero. This fact strengthens the Sangh’s belief of ‘social change by personality building’.)

To speak about the present political scenario in the state – when the BJP leaders visited the Sangh office to inform the ongoing political developments, one of the Sangh heads suggested them to dissolve the government and to go to the people. They also advised them to drop the tainted persons from key positions. It is the implementers who should have the will to do so. The Sangh itself cannot do it. In the democratic system adopted by the country, a political party has its own way of functioning. More importantly, there is ‘politics’. It is not proper to be deceived because of one’s own goodness. At the same time, the Sangh does not agree with those following the unethical path in the name of political strategy.

The recent statements of the Opposition party leaders (Sangh does not have any opposition party) that the Sangh should advise the BJP leaders, have been reported in the newspapers. It is evident here that even the rivals of the BJP have perceived that the Sangh has the moral power to advise a political party like BJP. It has been reported that an important political leader of the state said in a press conference that the RSS should advise the BJP regarding the ‘purchase’ of MLAs. The political leader who made the statement is also involved in the ‘business’. This is just like the ‘enlightenment’ happened in Karna when his chariot got stranded at the war front.

Sangh has its own method of thinking for the purpose of upholding morality in the society. For example, corruption. Corruption can be rooted out only when transformation takes place among politicians, officials, businessmen and common men. If any one of the parties here is corrupt, the system cannot be transformed. The Sangh is into efforts to create good leadership in all the four groups. It is true that good virtues should percolate from top to bottom. But the number of people with good virtues should increase in the society. They cannot be there only in those at the top. Hence, the Sangh has been striving towards developing virtues among the individuals continuously.

Once, a Swayamsevak asked Pandit Deendayal Upadhyay, who entered a political party as a Sangh Swayamsevak and seeded a new ideology and culture there: “There is a saying that power corrupts, and absolute power corrupts absolutely. Will it not happen if the leaders of Janasangh get power?” Deendayal said: “It is possible”. The Swayamsevak again asked: “Then, what is the hope for the future?” Deendayal replied: “The power of Sangh”. He continued: “If the political party started by Sangh gets corrupt, the Sangh has the power to destroy it.”

“Well, if it happens again?” the Swayamsevak asked once again. Deendayal smiled and said: “Haven’t you heard the story of Parashurama who circumnavigated the earth 21 times in order to destroy the Kshatriyas? Until Rama incarnated, Parashurama did not rest. Therefore, the power of Sangh – the power of good people of this country is not at all helpless. Keep faith on that. The Sangh has the power of destruction and creation like Parashurama. It has the maturity to decide when the time requires.”

The ultimate target of Sangh is not ‘one government or one chief minister or one prime minister’. But it is the building of an organized society based on Indian cultural values. The Sangh has treaded on a confident path all these eight-and-a-half decades. It is satisfied with the transformation achieved so far. Lakhs of Swayamsevaks are involved in the mission of social transformation across the country. Anybody can observe a total of 1.53 lakh service activities, 32,000 educational institutions and activities of reformation in thousands of tribal dwellings all across the country. ‘Forming a government’ or ‘a political party’ is just a small part of this vast canvass. Hence, the well wishers of Sangh and the Opposition of the BJP need not worry.

One thought on “‘RSS has all powers Creation, destruction and re-creation’”

Sun Oct 31 , 2010
Akhil Bharatiya Karyakari Mandali(ABKM) of RSS expresses serious resentment over the way the present turbulence in the Kashmir Valley is being handled by both the State and Central governments. The mistake committed in the past of trying to pamper the separatist and secessionist leaders of the Valley is being repeated […] 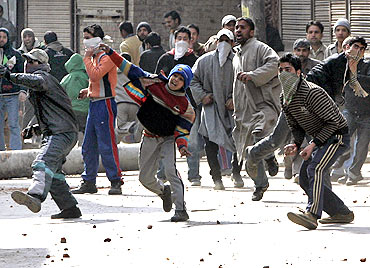