Bagalakot-Karnataka: It was a moment of satisfaction and joy for the villagers of Sabbalahunasi of Badami taluk belongs to Bagalakot district of Karnataka, when Seva Baharati, a leading social service organisation of RSS dedicated newly built houses tothes  flood affected victims. On monday, October 18, 2010 in a simple ceremony former RSS Sarasanghachalak Sri K.S.Sudarshanji handed over  77 newly built houses to flood victims. Seva Bharati initiated complete rehabilitation of 13 villages has now constructed well built 77 homes with better facilities for a village family. Works of construction of houses are going Still in other 12  villages. many volunteers are working for the cause, even vllagers also offered their shoulders. Sudarshanji symbolically handed over the keys of all these newly built homes. Later he also inaugurated a tution-institute for the 162 illiterate villagers, by name “Sakshara Bharati Kalika Kendra”.  Through that Seva Bharati not only aims at providing houses but also planned to educate the villagers about the social happenings and to make them to understand all benifits they could get from governmental schemes from state and centre. Sudarshanji further addressed a select gathering and told the Hindu view of environmental conservation.The street which leads and connnects these houses was names asVeer Savarkar Marg. Mon Oct 25 , 2010
Delhi witnessed a scene which would have been unimaginable in any other country with a governance that speaks for the land and its people. A person known as Syed Ali Shah Geelani, allegedly a known hawala racketeer and a backstabber Kashmiri who is a qualified Pakistani agent demanding “Azadi” from […] 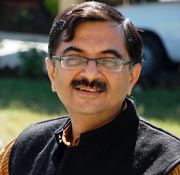