Bangalore, 10th November 2010: RSS slammed ruling Congress party for its anti-Hindu, anti-RSS propaganda today in its massive protest rally conducted all over India, including Karnataka. The protest dharna organized by RSS at Bangalore was started at 11.00 am at Town hall located in the center of the city. A huge gathering of around 8,000 people participated in the dharna. The programme started with chanting Hanuman chalisa by all the people gathered at the venue. Sri. Bhagayya, Akhil bharatiya bauddhik pramukh of sangh addressed the gathering in the beginning. He started his speech by appreciating the Bharatiya army and the police for protecting the country by terrorists and anti-national forces. He said that the country is worried about problems like Naxal terror, Jihadi terrorism, corruption and criminalization of the politics, suicide of farmers, commercialization of education and other burning problems. Whereas the central Government and the congress party are worried about non-existant Hindu terrorism or saffron terrorism. They call it saffron terrorism. Saffron is the colour of our country, our culture, our tradition and our values. The sadhus and saints of this country who sacrifice their life for the cause of this society wear saffron. Saffron is the symbol of sacrifice. By coining the word ‘saffron terrorism’, the congress has showed its dis-respect to the saints, the culture and the tradition of this country.

The congress has been doing anti Hindu activities since it came into power. In 2004, they arrested Kanchi shankaracharya on Diwali day without any good reason. But, the charges are disproved in the court and he is released. They are busy in propaganda against Baba Ramdev. Then IT department raided Mata Amritananda mayi’s ashram. Swami Lakshmanananda was killed by church and congress supported anti-national forces, because he stayed with Vanavasis (tribal) and served them. Why all these saints are targeted? Because, all are Hindus. There is no protection for Hindus in this country he said.

And now, the Congress is accusing RSS and Hindu organization of supporting terrorism. People of this country know what RSS does. RSS is an organization which is carrying numerous service activities for the downtrodden and the underprivileged people. The Congress should look at themselves first. It is the congress who killed thousands of Sikhs in 1984 after Indira Gandhi’s murder. The court has given verdict, in which many congress leaders are proved to be guilty. But, the government has not taken any action against them. In connection with Mumbia blasts of 1993, the then congress minister of Gujarat Mohammed Surti and some other politicians are sentenced for 20 years by the court. And, the congress says RSS is involved in terrorism. Whom are they fooling? One of the congress MPs from Andhra has told me that this is very bad of congress and he does not approve the charges made by congress leaders. The people inside the congress themselves know that these are false charges. But, still they do it for political mileage and to divert the attention of people from the huge scams like Adarsh housing society, Common wealth and the telecom 2G sprectrum, etc., and to appease minorities of this country.

Bhagayya said, in the name of diplomacy the congress government is having talks with anti-nationals like Gilani, who is supporting the anti-Bharat movement in Kashmir and acting like agents of Pakistan. The so called Azadis in Kashmir are telling ‘Haste liye Pakstan, Ladte lenge Hindustan’. Still, the central government is taking a mild stance towards them. Omar Abdullah says that the Kashmir’s integration in india was not a merger, it was an accession. But, it is very clear that Maharaja Hari singh has agreed for full merger of Kashmir and that is final. Even the parliament of Bharat has made a resolution which re-iterates that the Kashmir is an integral part of Bharat. Congress is ready to give autonomy to Kashmir, which is against the opinion of this contry. Is Kashmir the property of Congress or of this country?

Afjal Guru who is given death sentence by the court and is not hanged yet. They tried to destroy Ram setu. But, sangh and other Hindu organizations and saints conducted nationwide protest against destroying it and protected the Ram setu. The Tamilnadu government and the central government lost their faces in the courts too. In Tirupati, the congress government in Andhra had plans to make Tirupati a Christian tourism place by stealing it from the hands of Hindus. Hindus protested these wild plans under the leadership of Pejawar seer and the congress government had to move away from its hidden agenda. In Amarnath, the yatra Samiti purchased the land for construction of lodges for Hindu pilgrims. But, the government has stopped that too! Hindus united and protested this. Again the congress lost here and the Hindus won. Such acts of congress have made it clear even to a common man that they are anti-Hindu.

The congress is creating a divide between Hindus and Muslims for their vote bank advantage. Prime minister of this country says that the first share of the resources should go to muslims, as they are poor and sidelined. Then, the question arises if there are no poor among Hindus, Buddhists, jains and parsis of this country?

The media too is biased many a times. Before the Ram janmabhoomi  judgement was given by the court, the media kept saying that everyoine has to respect the court judgement. But, when the court agreed that the it was a janmabhoomi and approved that there was a temple existed previously at the site, the facts are not highlighted. Why is this discrimination against Hindus?

Sangh wants to take everyone together in the journey of nation building. The sarsanghchalak of RSS had told that the Ram janmabhoomi  judgement was not a win or defeat for anyone. It is an opportunity for everyone in this country to join hands to build a temple of Ram, who is a national icon and an evergreen inspiration for the people of this country.  This shows that we are not for the fight; we are for the unity of this society. But, the congress does not understand this.
Bhagayya concluded his speech by demanding congress to apologize for making such statements on Hindu terrorism and saffron terrorism and humiliating Hindu saints of this country. Ravan was also a learned person, but did wrong deeds and had a tragic end. He said that throughout our history, we see the instances where the truth and the dharma won. He suggested that the congress better realize this and stop the false propaganda against the Hindus. Else, the congress would become another Ravan in the history of Bharat.

Another speaker Sri Jayadev, national executive member of RSS has told in his speech that the RSS is organizing for a protest for the first time in its history. He said the congress made RSS to come to streets. During partition in 1948, sangh has protected Hindus in Pakistan and this has given a high popularity to sangh. Nehru was worried about the sangh’s growing popularity and wanted to stop the growth. Nehru used Gandhi’s assassination as a weapon to ban sangh. More than 65,000 swayamsevaks conducted satyagraha and demanded either to provide evidence for the accusations or to lift the ban. The court  has disapproved the charges against the sangh and the ban was lifted. During emergency sangh is banned again by congress government. More than 30,000 swayamsevaks are arrested. Congress was defeated in the next elections. In 1992 after the demolition of the disputed structure at Ram janma bhoomi, the congress government banned sangh again. Within 6 months, court has instructed the lift the ban as it was illegal. Thus, whenever the congress tried to suppress sangh, it has failed and the sangh has grown stronger.

He said that Rahul  Gandhi has compared sangh with SIMI (Students Islamic Movement of India), which is a banned terrorist organization. Rahul Ganghi is a young leader of congress and he is a future prime minister candidate. He suggested Rahul to know the history properly before he makes such accusitions. Sangh is carrying out more than 1.5 lakh service projects throughout the nation. Imbibing patriotism and service mentality in its swayamsevaks. Running thousands of schools and colleges where the education based on bharatiya culture is given. Now, congress is trying to accuse sangh of having links with terrorist incidents. If sangh were to involve in terrorist activities, it would not have involved in social service and nation building, he said.

7 lakh Hindus are driven out of Kashmir and they are living in pathetic condition in slums of Delhi now. More than 60,000 innocent people are killed by terrorists till now. More than 13,000 soldiers sacrificed their lives for protecting this country from  terrorists. But, congress has never raised its voice against this. Now, when there is a bomb blast in Malegaoon and other places they make hues and cries on this and immediately start accusing Hindus and Hindu organizations for these incidents. The involvement of the accused is not proved yet in the court. In spite of that, congress projects the case, as if the hindus are behind these incidents. Kashmir has more than 45 terrorist organizations. Still the congress government gives more funds, autonomy to the Kashmir. It has sympathy over the real terrorists and tries to project hindus as terrorists instead!

He said that the Congress does not have any moral right to talk on hindu terrorism and accuse hindus when the party itself supporting terrorists by not taking firm steps against the real terrorists. He said that this is the first step of the protest and warned congress if it does not stop its propaganda, RSS would continue the protest and movement against it, till it stops such acts.

Sri. V M Patil, Retd., Lt. Gen and the national vice president of FINS (Forum for Integrated National Security) participated and condemned the congress for making charges against RSS and he said that RSS is an organization working for organizing the society and working towards making this country stronger.

Sri Sri Sowmyanathananda Swamiji of Adichunchanagiri Mutt and Sri Sri Sureshananda Swamiji of Gosayi Mutt addressed the dharna and told in their speech that they are fully with RSS in protecting hindu dharma and urged that the blaming RSS and Hindu organizations for terrorism should stop and Hindu sentiments should be respected.

Wed Nov 10 , 2010
The protest against anti-Hindu policy of the central government took place in all Districts of Karnataka on 10th  Novemmber 2010 between 11 am to 1 pm. Man Swayumsewakas memebrs of Sangha parivar organisations participated in the protest. Read districtwise reports and photos–> email facebook twitter google+ WhatsApp 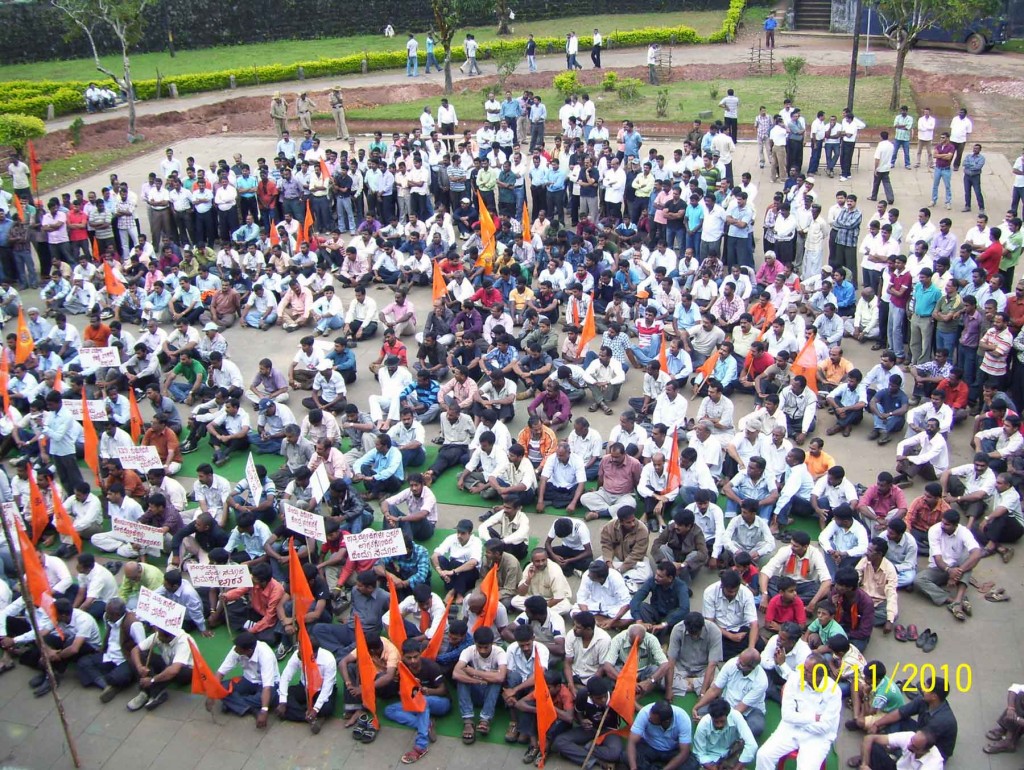