The Moving Finger Writes . Manmohan brings shame to the image of India

SO it is all over; Baba Ramdev has given up his fast; but the name-calling and finger-pointing continues. The world over, the UPA government has only brought shame to the clean image of India. We don’t have s single moral leg to stand on. What the UPA government did- to open tear gas on innocent men, women and children fast asleep, raining lathis and pelting stones at many of them as they woke up. We, the people, can only maintain our silence.

For all that, we need to move on. The UPA government will not resign. Nor can any further effort to get it dismissed, succeed. There is no way to have mid-term elections. No party wants it. Not the BJP. Not any other party in Opposition. And certainly not the Congress. For better or for worse – undoubtedly for the worse – we will probably have to up with the UPA’s shenanigans till 2014. By then anything can happen. It is difficult to know who runs the government. The Prime Minister has largely maintained discreet silence, except to say that what was done was done because there was no alternative, but to drive out Ramdev’s followers from the Ramlila grounds.

That is all that he could say, poor man, about his government’s despicable behaviour, which he should by now know, has had no parallel in post-independence history. The condemnation of the UPA government has been universal and to the point. But where does one go from here? Who, please, is running the government? If the Prime Minister has been stone silent, Sonia Gandhi has been even more so. There hasn’t been a word either from Rahul Gandhi. The only voices one has heard and those of Kapil Sibal and Digvijay Singh. Nothing shows the total collapse of the UPA government than this delegation of power. It shouldn’t come as a surprise if the government presents a toothless Lokpal Bill at the monsoon session of Parliament and exert all its influence to get it passed and then crow that it has stuck to its promises.

The trick is to gain time and tire out the Opposition into acquiescence if not submission. And we will be where we are now. The efforts of both Baba Ramdev and earlier of Anna Hazare would all have been in vain. And a public, tired beyond imagination, would probably leave everything to Fate – and Sibal, which, in any event has been the aim of the UPA government. Meanwhile, promises are being made. Finance Minister Pranab Mukherjee, addressing a meeting of the Organisation for Economic Cooperation and Development (OECD) held in Delhi in mid-June confessed his inability to end banking secrecy, no doubt aware that his government has been able to do little in securing past banking information from foreign countries for income-tax administration purposes. India just does not have the muscle to get Swiss banks to reveal the bank accounts maintained by Indians in total secrecy.

And no Indian who has stashed away illicit money in banks abroad will ever admit to his crime, let alone reveal his assets. Switzerland, and to a lesser extent, some more minor countries the world over, has long been the thieves’ bazaar, with the tacit consent, acknowledgement and even approval of countries all over the globe. There is nothing short of universal damnation, through a unanimous resolution in the UN General Assembly, that can compel the rogue state Switzerland to reveal the names of wrong-doers, except under rules laid down by it and which alone is entitled to interpret. In his address to the OECD, Pranab Mukherjee said that some countries have agreed to end banking secrecy only from a prospective date but were unwilling to share information on past banking transactions, raising questions about the efficacy of existing legal provisions for exchange of banking information. What India wants to know is who has accounts now and what are its contours.

Reports of the extent of stashed wealth vary and some believe that it is more than a trillion dollars. Of what possible use is knowledge of future deposit holders, if knowledge of past and present accounts and account-holders remain hidden? Who do foreign banks think they are fooling? Has India – or, for that matter any other country – any option but to accept grim reality? There was a time when the United States managed to get the information it wanted, but then it had economic power to strangle the offending nation, power that India does not possess. Baba Ramdev can fret and fume, and so can we all, but beyond that is dead silence. The Government doesn’t have to know how much money is secretly stashed abroad. To begin with it suffices if it can just get the names of the customers. But even that seems to be difficult to get, if not impossible to acquire.

It is exasperating, but that is the bare truth. So, in the end, it is going to be a deadlock. Where does it leave Baba Ramdev and Anna Hazare and all the idealists craving for a just and law-abiding India? The harsh reality is that we are victims of a global system which turns a blind eye to law breakers. But there is no need yet to despair. Let us think positively and see what can be done under-existing circumstances.

Corruption comes in many faces. Bribe taking has become common; so is tax evasion. As the media has noted, the tax payer must be “incentivised” into paying his dues, the theory being that the simpler the tax rules and the lower the taxes, the greater will be the pressure to be honest.

At a time when cost of living is rising to the skies, bureaucrats are especially likely to stray, though, a Secretary to a Ministry today gets over Rs 60,000 pm. Salary levels in all stages of administration have of necessity be revised but at the same time it must be accepted that corruption cannot be erased overnight. To think that government servants and, for that matter anybody anywhere will mend their ways overnight is to live in a fools’ paradise. But if the message is sent that the government means business by checking out on retired bureaucrats, it may gain some credibility which presently it sadly lacks. In all these matters all concerned citizens should unite.

That both Anna Hazare and Baba Ramdev received so much support, if not adoration, indicates the depth of frustration and anger among ordinary citizens at what’s been going on for years together without government showing any concern. Does it matter whether it is the RSS or any other body that is behind the agitation? If indeed it is the RSS which is calling the shots we should be grateful to it for reflecting public sentiment. What was the UPA government doing all these years? 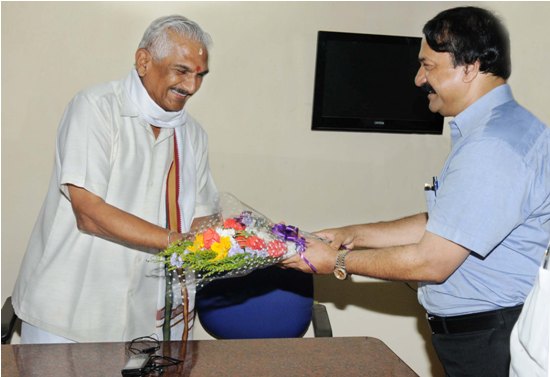