I have always been cynical about palmists, astrologers, etc. In politics quite a few hesitate to embark on a new project without having a clearance from the soothsayer they trust.

I have often recounted how on one occasion my own skepticism was rudely shaken.

Way back in the 1970’s we had in our party (then Jana Sangh) National Executive a reputed professional astrologer, by name Dr. Vasant Kumar Pandit. He was based in Mumbai (then Bombay). He was a committed activist of the party who had courted arrest fourteen times including during the movement for Kashmir’s total integration, and the struggle against the Emergency. He had risen in the party ranks first to become President of the Bombay City Jana Sangh and later of the Maharashtra Pradesh Jana Sangh.

Last week, there was a two day meeting of the BJP’s National Executive at Lucknow. Party President Shri Gadkari asked me to deliver the Valedictory Address on June 4 evening. I began my speech with the remark that June 1975 would always remain an unforgettable month for Indian politics. And I have been wondering if June 2011 also is going to become a similarly unforgettable month for us all.

In June 1975, two big events had occurred in quick succession.

On June 11, results of the elections to the Gujarat State Assembly were announced. Until that point of time Gujarat was an invincible citadel of the Congress (I). But the combined opposition under the guidance of Shri Morarji Bhai Desai smashed this citadel and swept the state assembly.

The following day’s event was a virtual thunderbolt for the Congress. In an election petition filed against Smt. Indira Gandhi, Justice Jagmohan Lal Sinha of the Allahabad High Court struck down her election to the Lok Sabha from Rae Bareilly, and further barred her from contesting for six years on grounds of electoral corruption.

These two happenings naturally created a sense of euphoria in all non-Congress circles. Indeed it was in a very elated mood that our party executive whose meeting had been fixed immediately after the Gujarat Assembly polls counting, had  assembled at Mount Abu on June 15, 16 and 17.

Relaxing after lunch on the second day I casually asked Vasant Kumar “Pandit ji, aapkey nakshatra aage ke liye kya bol rahe hain?” In early 1976, the Lok Sabha elections were due. My political assessment on the basis of Gujarat had made me optimistic about 1976. His reply dispelled the casualness from my query, and also all my optimism.

“Advaniji” he said, “frankly I don’t understand. I feel intrigued by my own assessment.” He added: “what I can read from the stars tells me that we are headed for a two- year exile.”

True to Vasant Kumar’s forecast the Emergency did last twenty one months!  It really became a two-year vanavas !

Before shifting in 2002 to my present residence on Prithviraj Road, I had been at C1/6, Pandara Park for 32 years (that is, from 1970 onwards, when I was first elected to Parliament). My immediate neighbours there (at C1/7) were the Tandon brothers; (one of whom Gopal Tandon was my Special Asst. when I was I & B Minister with Moraraji Bhai Desai and the other Bishan Tandon was a Jt. Secretary in the PMO with Smt. Gandhi during the emergency period) .

Bishan Tandon’s PMO Diary is a revealing document which shows how the supersession of three senior most judges – Justice Hegde, Justice Shelat and Justice Grover was a planned operation essentially to ensure that Justice Hegde did not get elevated to the office of Chief Justice and instead Justice A.N. Ray secured that position. The P.M. was keen to ensure that her election petition even if it were accepted by the High Court could be thrown out by the apex court. This happened anyway because after the emergency, the amendments made in the Constitution and the law made the supersession superfluous.

After the two events of June 11- 12, we in the opposition were expecting some crackdown like arrests etc. But frankly, none of us expected an unprecedented Emergency like this one – in which total censorship of the media, more rigorous than even in a war, censorship even of reportage of parliamentary debates, imprisonment of veterans like Loknayak Jaya Prakash, Morarjibhai Desai, Vajpayeeji, and Chandra Shekharji, incarceration of all important Opposition MPs and, of over one lakh opposition activists would take place.

On June 5th morning there was a wedding ceremony in Chennai whose invitation I had accepted. Venu Srinivasan’s (TVS) daughter was to be married to the son of N.R. Narayan Murthy (Infosys). I reached Delhi on June 4 evening, and accompanied by my daughter Pratibha, arrived at Chennai around midnight.

A couple of hours later Pratibha woke me up, and asked me to switch on the TV, and have a glimpse of the brutal crackdown on the gathering of Baba Ramdev‘s followers at Ramlila Maidan – men, women  and children – that was taking place. I switched on the TV and the scene was really horrible.

At a press conference convened by our local unit at 11.00 AM the next morning I said : Gen. Dyer’s guns and bullets weren’t there, but the cruelty on women and children on display easily reminded viewers of the Jalianwala Bagh outrage.

At my press conference I again drew a parallel between the latest events, and the happenings of 1975. Only a cornered government unable to defend its misdeeds before an angry populace and a desperate leadership can behave in this manner. I urged the President to have Government convene an emergent session of Parliament to consider three issues: the Series of Scams, the issue of getting back black money stashed abroad, and the crack down on a peaceful assemblage. I called this behaviour by the Police Authorities as Naked Fascism.

When Anna Hazare first raised the Lokpal issue he had been clubbed with the RSS. These days Baba Ramdev’s movement is being dubbed an RSS sponsored one. Let no one forget that even Jai Prakash Narayan had to hear similar noises when he was leading the anti-emergency movement.

I found an editorial of Hindu’s Business Line very pertinent in this context. Captioned “Do people matter” the opening paragraph of the editorial says:

“Cracking under the relentless pressure from the Hazare – Ramdev campaigns over the last eight weeks, the Government is making one mistake after another as it desperately tries to divert public attention away from corruption. The main takeaway for the people is that this Government will go to any lengths to protect the corrupt. The mistakes have been well-chronicled, but it is the ingenuous arguments that now stand out. One is that groups of well-meaning citizens cannot be allowed to hijack the legislative agenda; the other is that the RSS is behind the anti-corruption movement. Taking the second argument first, one must ask: even if it is true that the RSS is behind the movement, does that somehow make it illegitimate? Why is the Government trying to shift attention from corruption to the RSS? If RSS volunteers helped out in an earthquake or a flood, would that help be rejected by the Government? So the point is not who is doing it but what it is sought to be done. And this clearly makes the Government nervous to the extent that it is even using phrases from the Emergency days, such as “an attempt to de-stabilise the Government.” 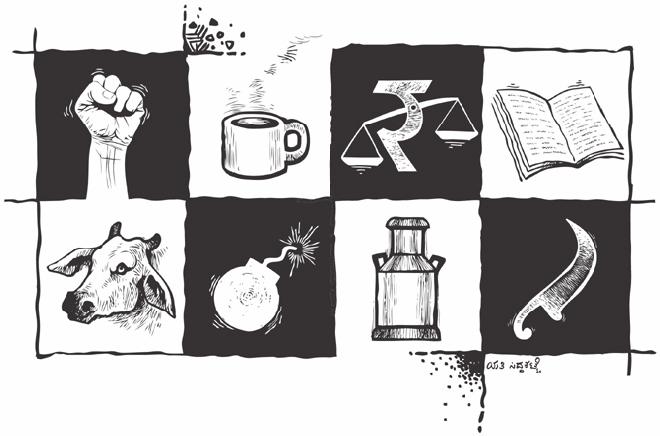