Swami Chidananda Saraswati of Parmarth Niketan, Rishikesh, is one of those spiritual leaders whom I hold in high esteem. His ashram on the banks of the Ganga is truly a haven of peace, tranquility and divinity. I have gone there with my family several times. The evening Ganga Aarti on the ghat, when Swamiji chants mantras and sings bhajans along with children from his gurukul, has always been an ennobling experience for me. It has also has become a major attraction for pilgrims coming to Hardwar and Rishikesh.

I am always amazed by the passion and perseverance with which Swamiji pursues new ideas that can be useful in addressing entrenched problems facing India. Yesterday, when he visited our home, he explained to me his two newest and inter-related initiatives: Mission Solar to make India, ‘Solar India’; and Mission Ganga to restore the Holy Ganga to its pristine purity. He had just returned from a long trip to America and Europe, where he had intensive interactions with scientists and entrepreneurs working in the area of renewable energy, with special focus on solar energy. He said that revolutionary breakthroughs in solar energy research, such as the far more efficient Concentrated Photovoltaic (CPV) technology, were in the offing. These could lead to a significant increase in the generation capacity of solar power plants along with a major reduction in cost. He said that many of these scientists and entrepreneurs are of Indian origin and they are keen that India should take the lead in aggressively pursuing Green Energy options by using the latest technological breakthroughs. One of these Indian-origin scientists is Darshan Goswami, who works with the US Department of Energy. The presentation by him, which Swamiji showed me, bears an appealing title — ‘Renewable Energy Solutions for India : A Strategic Development Plan’. Describing the Sun as a “Goldmine of green energy”, it proposes that India can meet 100% of its future energy needs by 2050 using non-polluting renewable Energy solutions.

Swamiji praised the Gujarat Government’s encouragement of solar energy and wanted all our states to take up this work on a mission mode.

But what left a far deeper imprint on my mind was how Swamiji contextualized the strategic plan of making India ‘Solar India’ in an initiative of even greater strategic value — depolluting the Holy Ganga (and, simulateneously, other sacred rivers in India), transforming the socio-economic life of nearly 50 crore people living in states in what is called the ‘Gangetic Belt’, and bringing about a comprehensive cultural transformation in all of India. This is how he explained his vision.

Ganga is the holiest of holy rivers in India. This has been so since time immemorial. Nevertheless, she is languishing in such polluted state that people hesitate to bathe in her waters even in Kashi. This is caused by reckless and ill-planned industrialization and urbanization, made worse by the lack of even elementary civic facilities in the towns and villages along the Ganga. In the upper reaches of the river, hydro-electric projects have caused considerable damage to the Ganga and its natural ecology, leading to drying up of long stretches of the river-bed and depriving the nearby villagers of their main source of water.

Swamiji argued fervently that, by adopting a strategic plan for the development of solar power in India, our country could reduce, and ultimately eliminate, dependence on big hydropower projects (which are harming our rivers), thermal power projects (which cause unacceptable carbon emissions harming the planet’s climate) and also on imported fossil fuel (which is a huge drain on our national economy). The beneficial results of the ‘Solar India’ plan will not manifest overnight, but our country must make a ‘sankalp’ to embark on this plan right now and implement it with missionary zeal.

Swamiji continued: “The solar power mission is only a part of the larger mission to depollute the Ganga. Today most people do not realize that nearly a million people living along the banks of the Ganga die each year due illnesses caused by its polluted water. A few dozen people dying in bomb blasts in India becomes big news worldwide, and rightly so. But the tragic deaths of many people, who are dependent on the Ganga, goes unnoticed even in India. We must change this. We must use technology to depollute the river. And, indeed, so many breakthroughs are happening in solid waste management and water purification and recycling. Alongside, we must launch a mission, which I call the 3-T Mission — toilet in every home, tap in every home bringing clean water, and tree-plantation on a massive scale in every village and town. Millions of Indians abroad would be inspired if India takes up this comprehensive Ganga Mission. They would even be willing to make generous contribution to this project.”

Swamiji described an ambitious project being developed in America to build a mega-portal on the Ganga, which would harness the power of the Internet to connect every potential donor in India or abroad to choose a village or town, make a donation for the 3-T campaign, and monitor its implementation online. “In this manner, it’ll be possible to emotionally and spiritually connect every Indian to the Ganga Mission.”

What Swamiji said next touched me deeply.  “Every Hindu in India wants to offer Ganga Jal to his near and dear ones in the last moments of their earthly life. My dream is to see that when people take Ganga Jal, they take water that is not only holy but also pure.”

This prompted me to share with Swamiji my own first and unforgettable experience of what River Ganga has always meant to Indians, even those living far away from it, such as my family that lived in Sindh. When Partition forced us to leave Sindh and migrate to this side of India in 1947, my father decided to settle near Kandla in Kutch, where a new township for Sindhis was being built. But my 80-year-old grandmother said to my father: “I am not going to live for many more years. My wish is to spend my last years in Varanasi by the side of the Holy Ganga. You may settle in Kutch after I pass away.”  My father lived in Varanasi for four years, and shifted to Adipur in Kutch later.

I narrated to Swamiji another experience showing the unbreakable bond between the Ganga and ‘Civilisational Indians’ abroad. Last year, I went with my family to Indonesia and were staying in a resort in Bali. The driver who drove our buggy, like many others in Bali, was a Hindu. The only thing about India that he was interested in was the Ganga. “How far is the Ganga from Delhi?” “How can one go there?”. Seeing his transparently intense Ganga bhakti, I commented to my daughter Pratibha: “We had been to Gangotri a few months back and from there taken gangajal to be poured on the shivalinga at Rameshwaram. I wish we had brought some gangajal for these devotees here. How happy they would have felt!”

As a person who has been in public life for more than six decades, and as someone who has been advocating shuchita (probity) in politics, I believe that the mission to depollute the Ganga has an urgent and important lesson for the entire political class in India. The political life in today’s India is afflicted with so much corruption and immorality that, de-polluting politics should be regarded as an integral part of the Ganga Mission that Swamiji has envisioned. 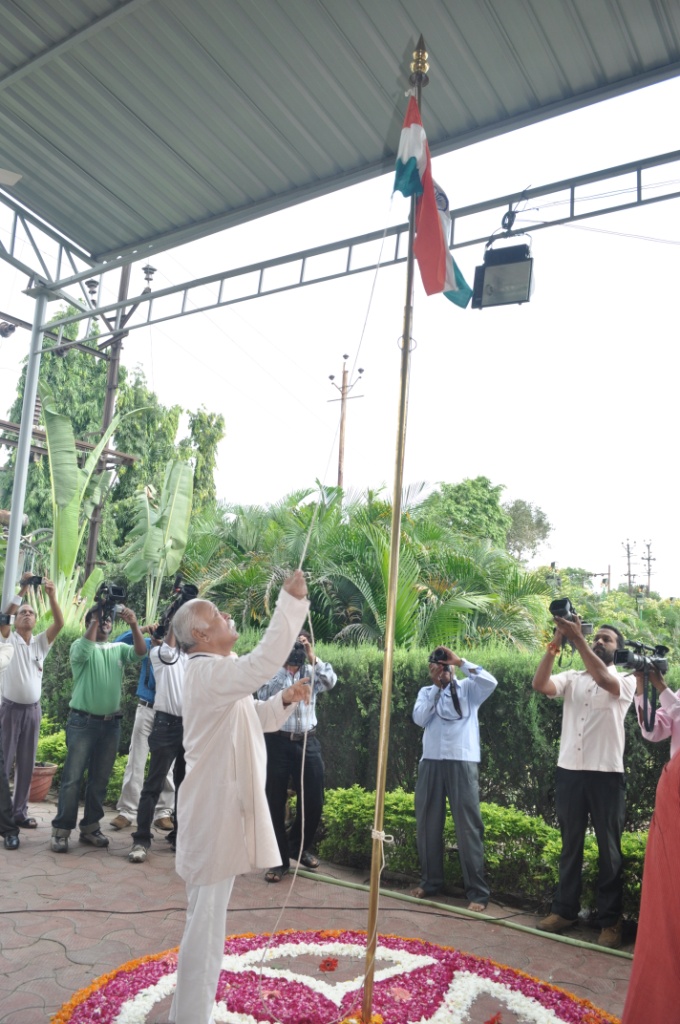