Without doubt, this month’s earth-shaking event has been Osama bin Laden’s execution in the Abbotabad compound where he had been living in hiding for some time past. Karan Thapar is an aggressive TV interviewer. He does a weekly feature DEVIL’S ADVOCATE on CNN-IBN. His last interview was with Gen. Musharraf in which he squeezed out of the General a reluctant statement that if he had been in charge of Pakistan today, he would have apologized to the people for what had happened. But try as much as Thapar would, he could not make Musharraf go even an iota beyond admitting that for Pakistan the event was an embarrassment simply because it was due to failure of intelligence.

For the rest of the world, however, some facts seem evident.

FACT 1
Osama bin Laden could not have been in this hide out without the knowledge and approval of both the Pak Army Chief Kayani as well as the ISI boss Shuja Pasha. And if bin Laden had been in this mansion since 2005, then the decision must have been taken by Gen. Musharraf.

FACT 2
The presumption also is that those who decided to lodge bin Laden at this cantonment town of Abbotabad must have taken into account the wanted terrorist’s health requirements. Doctors of a military hospital alone would be the best guarantee for a patient about whom more important than even expert health-care would be preserving secrecy about the identity of the patient.

FACT 3
Americans have publicly said that they informed Pakistan about the 40 minute operation only after they had not only completed it but had flown back bin Laden’s body and whatever else was to be taken from the compound. Leon Panetta, the head of the CIA has told TIME magazine that the intelligence was not shared with Pakistan because they were scared lest the Pakistanis would tip off Osama bin Laden. In other words Americans did not trust Pakistan.

A longish excerpt from Thapar’s interview with Pakistan’s former President runs like this :

Karan Thapar: Let me put it like this. Today as you must be aware, that there is outrage and anger in Pakistan, that its airspace could be violated, its sovereignty could be violated for almost two hours, that American soldiers could descend on a compound and kill Osama bin Laden and disappear without being detected, without being engaged. To many Pakistanis, this raises worrying and serious questions about Pakistan’s defence preparedness and its ability to secure its borders. As a former Army chief how do you address those concerns today ?

Pervez Musharraf: Well, let me frankly admit that our focus on all these radar information in intelligence is focused more towards your side and on this side, because of the mountains and hilly terrain, inaccessible terrains, the surveillance coverage is not that effective.

Karan Thapar: So what you’re saying behind that answer is that Pakistan’s army, air force and its defence preparedness was caught with its pants down ?

Parvez Musharraf:  well, aren’t you enjoying using these terms, slap in the face and pants down etc?  Well, it has been an embarrassment already.

Karan Thapar: It has been an embarrassment, you frankly admit that. Many would say that its more than embarrassing, its humiliating because Pakistan is after all, not only a country with an Army, but a nuclear power state.  Is it humiliating ?

Pervez Musharraf: Well, why are you getting involved in all these adjectives ? Let’s forget it.  It has been embarrassing.

Karan Thapar: Tell me General Musharraf, given the outrage and anger in Pakistan, do heads deserve to roll ?

Pervez Musharraf:  Yes, I think there is a requirement of enquiring, finding out the people who failed and punishing them.

Karan Thapar: What about General Pasha, there is speculation in Pakistan that he may be considering resigning, the Army has officially announced that is not the case, do you think as head of the ISI he should accept responsibility and resign ?

Pervez Musharraf: He is the most competent officer and I don’t think he should resign.

Karan Thapar: What about General Kayani? He is Army Chief and if Pakistan’s defence preparedness and borders were so blatantly violated, should General Kayani accept some measure of responsibility ?

Pervez Musharraf: Well, measure of responsibility comes from, if we go right on top, it comes right from the top to the bottom as I said the detachment commander. Let’s leave at these things to the enquiry and actions to be taken later.

Karan Thapar:  You are saying on the one hand that heads must roll, but you’re leaving out of that tally, the possibility that Generals Pasha and Kayani should resign.  Do you think that these two gentlemen owe the country an apology ?

Pervez Musharraf: Well, I leave it to them to decide.

Karan Thapar: Now that time you have given a very careful, measured answer that you leave it to them to decide. If you had been in their position, would you have apologized?

Pervez Musharraf: I may have apologized on behalf of the intelligence agencies because this is a great slip up, this is a great embarrassment, to that extent. Maybe yes, and then assured the nation that we will investigate and find out how this slip up occurred.”

I wish the General realized that Washington is sure to view the episode not just as a slip up, but as an act of calculated duplicity and betrayal.

At the root of it all is not any intelligence failure. At the root of the embarrassing situation in which Pakistan has landed itself lie two factors:

Firstly, Pakistan’s obsession to capture Kashmir Valley anyhow. Also, they have failed to get this either by the 1947 misadventure tried through tribesmen, or the subsequent three wars they have waged against India, and even after that despite their decision to continue a proxy war through three terror outfits whose focused target has been India.

Little wonder, Robert Blackwill who was U.S. Ambassador in India during the NDA’s tenure in New Delhi told NDTV that the trust between Pakistan and the U.S. has been broken. He finds it difficult to believe that Pakistan was unaware of Osama’s presence, he added.

Indeed, after May 1, 2011, Pakistan’s condition is absolutely unenviable. Americans cannot trust it. Nor can the other nations which are part of the global alliance fighting terrorism. Ironically, even Al Qaeda and its cohorts would be in a quandary to evaluate how much faith they can really place in Pakistan! On May 9, U.K.’s leading newspaper Guardian has published an astounding report saying that when in late 2001, bin Laden who was at that point of time hiding in the mountains of Tora Bora in Afghanistan somehow managed to escape a drone attack by the U.S., a secret deal was struck by U.S. President Bush with Pak President Musharraf that if Americans were able to find out at any point of time where Osama was hiding, and the hideout happened to be in Pakistan, Americans would come and get him. According to the agreement, the Pakistanis would put up a hue and cry, but would not stop them. This is precisely what has happened in the wake of the operation by U.S. Navy Seals in Abbotabad on May 1!

Thu May 12 , 2011
Balagokulam: A children’s movement making a transformation Tap them young, guide them to be good citizens –Kariya Munda, Dy. Speaker, Lok Sabha “AT the time when our young generation is fast turning to the western way of life, the value-based activities of Balagokulam are necessity of time. The teaching of […] 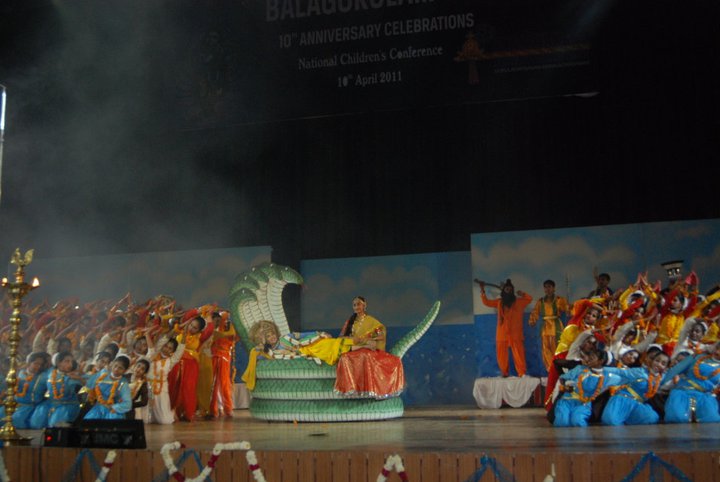