India has been independent for over six decades now. For the first three decades the Congress Party dominated the political scene like a colossus. It was in power in most of the States. In the Lok Sabha, none of the non-Congress parties could muster strength even to secure the status of the Official Opposition, with its leader named Leader of the Opposition. It was in the mid 70s that a powerful students movement arose in Gujarat against corruption. This inspired Jaya Prakashji to mobilize students in Bihar also against corruption. It was this campaign that brought J.P. in touch with the ABVP, and through this body, with the RSS. Independently, I had been meeting him because of his interest in Electoral Reforms. He kept affirming those days that Corruption in public life has its roots in the Congress Government’s own Corruption. So long as the Opposition Parties remained divided, this malady cannot be effectively tackled.

The J.P. movement against corruption thus brought the Jana Sangh, Congress (O), S.P. and BLD together. As Janata Morcha, these parties acting in concert won a significant victory in Gujarat, till then an impregnable Congress stronghold.

The Gujarat verdict was announced on 12th June, 1975. On exactly the same day, the Allahabad High Court declared Prime Minister Indira Gandhi’s election to the Lok Sabha from Rae Bareilly as void, and furthermore disqualified her for a period of six years on grounds of electoral corruption. Because of these twin events June 12 triggered off a chain of earthshaking happenings including Emergency, incarceration of over one lakh persons, censorship of the press etc. which ended only when in March 1977 Lok Sabha elections, the Congress Party was roundly defeated, and the first non-Congress Government was formed under the leadership of Shri Morarji Desai. Jana Sangh, now a party merged into the newly formed Janata Party, was a constituent of this Government. The seeds were laid for the evolution of the bipolar polity which it has today become. It would thus be clear that the CATALYST for the first major turning point in our political history was CORRUPTION.

One wonders if for the second time, six decades after the adoption of our Constitution, Corruption again is going to become the principal Catalyst for Change!

When the year 2011 commenced, I had commented that the year just ended had been a year of scams and scandals. In fact, on the very first day of the Winter Session of the Lok Sabha, the entire opposition led by the BJP had decided to raise mainly three scams, namely, the Commonwealth Games scam, the 2G Spectrum scam and the Mumbai Defence Land scam.

If the opposition had been allowed to have its say on this opening day, the deadlock precipitated that day and which continued for the entire session may not have happened.  What really aroused the opposition’s anger was the treasury benches collectively shouting down LOP Sushma Swaraj. Soon, most opposition parties came round to the view that unless Government agreed to setting up a Joint Parliamentary Committee to probe these scams and punish the wrongdoers, Parliament would not have any other business.

A series of meetings convened by Government and the Speaker failed to resolve the stalemate. However, as the Budget Session started approaching more meetings with the opposition made Government feel that forming a JPC would be in the circumstances, a right course of action. The Prime Minister’s television interaction with some leading journalists last week, however, has been disappointing. It shows much less concern about corruption than it does about phoney coalition constraints.

The BJP is acutely conscious of the fact that in policy matters, alliances with other parties do have a restraining effect. Speaking at an NDA rally in Hyderabad last week, I observed that among the achievements of the NDA Government headed by Vajpayee, I would reckon the smooth formation of three new states–Uttaranchal, Chhattisgarh and Jharkhand, as a distinctive achievement. If our alliance partner TDP had been agreeable, we could have with as much ease formed Telangana also. But our coalition-dharma did not permit it. But neither the Vajpayee Government, nor any other NDA Government in the States has ever allowed coalition dharma to become an alibi or excuse for compromising with integrity or good governance.

In an article in The Hindu last month, R.K. Raghavan, a former Director of the CBI seems very cynical regarding declarations being made by the UPA Government about an “action plan” to tackle corruption. He describes this so called action plan a “non-starter”. The title of this article is “The losing battle against corruption.” Raghavan describes CVC Mr. Thomas as “an albatross around the Government’s neck.” He approvingly quotes former CVC Vittal saying that corruption in India has become a low-risk and high profit activity.

I would nevertheless commend for consideration a proposal made by yet another former CBI Director, C.V. Narasimhan, who has generally enjoyed a high reputation both for integrity as well as sharpness of mind.

Narasimhan has suggested that Government should enact a law titled “Criminal Misconduct of Public Men.” This law, he says, should be directed against all offences that come under the ambit of the Prevention of Corruption Act, 1988. Both politicians as well as bureaucrats should be covered by this statute.

Similarly, the issue of black money in tax havens abroad must be pursued vigorously. The country is eagerly looking forward to Ram Jethmalani’s PIL in the Supreme Court, being taken to its logical end. Today the election law requires every candidate for election to file his assets and liabilities. To deal with this issue of recovering Indian wealth overseas for India, let the law also obligate every candidate to declare on oath that he has no undeclared wealth overseas. The law may also empower Government to confiscate any such wealth traced by Government.

The same approach may be adopted in respect of all Ministers, MPs and Party officials, and a specific category of the country’s affluent class.

The C.A.G’s one single figure, assessing that Raja’s spectrum scandal cost the country a loss of one lakh seventy six thousand crores shook the entire nation. If the Global Financial Integrity’s evaluation that India’s wealth stashed away in Tax Havens overseas is something like Twenty lakh seventy five thousand crores, one can imagine how miraculous an impact can be made on India’s poverty if the Supreme Court can compel Government to get back all this wealth !

I’m not as big a culprit as being made out to be : PM: TIMES NEWS NETWORK

THE LONELINESS OF BEING MANMOHAN: OUTLOOK

A PM does not invite media over for a chat because his Principal Secretary has told him that he has nothing scheduled that morning.

Mon Feb 21 , 2011
In a first of its Kind, Thousands of young techie-Swayamsevaks from different Corporate-IT industries participated in “RSS IT Sangama-A confluence of all the Swayamsevaks of IT Milans, Karnataka” at Bangalore. IT Sangama,a full day event was convened today to commemorate the 10th anniversary of RSS IT Milans. email facebook twitter […] 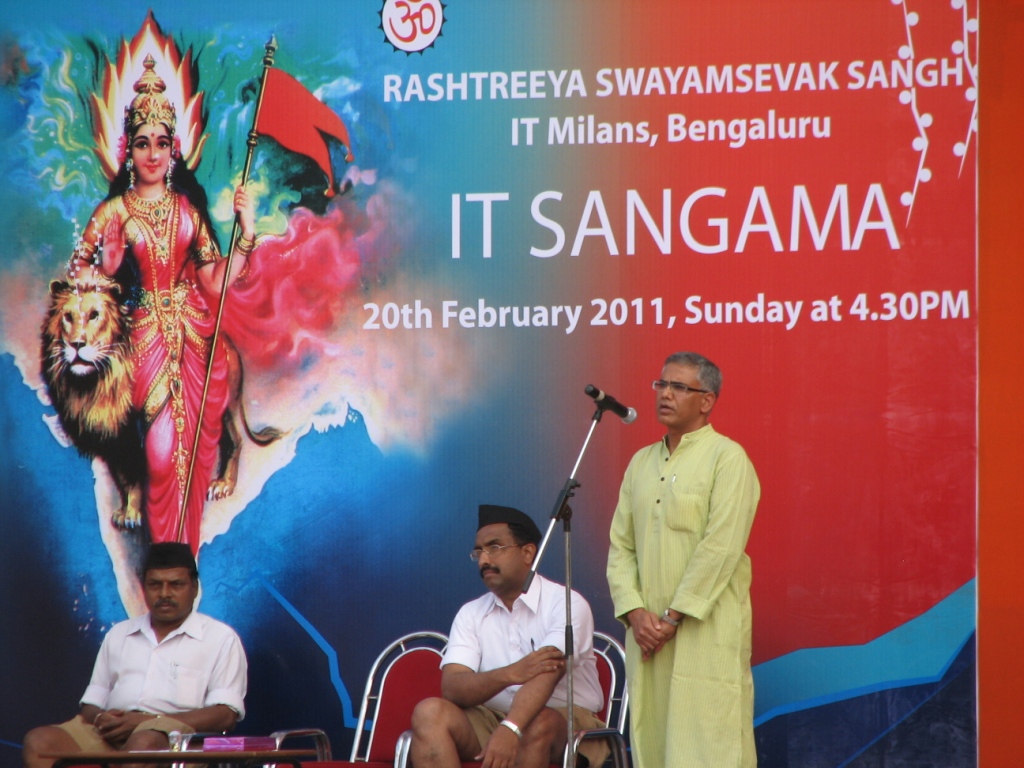