The story of Swami Aseemanand, the anti-Christian conversion crusader of Dangs, Gujarat, who reputedly mentored but did not join in the ‘Hindu terrorist’ blasts against overtly Islamic targets at some sites across the country – on a staggeringly shoe-string budget, with paltry sums like Rs 25,000/- and Rs 40,000/- mentioned in strategic leaks to the media – is a mystery wrapped in a riddle wrapped in an enigma. Put another way, the alleged facts don’t add up to a credible story. To its credit, even sections of an otherwise credulous secular media find it difficult to swallow this lemon whole. Thus, Rediff.com (Samjhauta blasts: A tale of two confessions, 13 Jan. 2011) observes that while the National Investigation Agency (NIA) is concentrating on Aseemanand’s confessions regarding involvement of Hindu groups in the Samjhauta Express blasts case, it cannot be overlooked that the Students Islamic Movement of India (SIMI) had previously claimed responsibility for the attack!

In October 2008, Safdar Nagori, chief of the SIMI Nagori faction, admitted to investigators that the Samjhauta blasts were carried out by SIMI activists with the help of Pakistani nationals who came to India for the purpose.

Yet suddenly, in January 2011, Swami Aseemanand reportedly ‘confessed’ before a Delhi magistrate that ‘On February 16, 2007 I met Sunil Joshi and Bharat Rateshwar at Balpur and I was told that there was some good news in store for me. I then returned to Shabri Dam, my ashram in the Dangs region of Gujarat, and two days later read about the Samjhauta blasts in the newspaper. I confronted Joshi and he said that his men had carried out the blasts’.

The Samjhauta blasts took the lives of 68 persons, so they merit serious investigation. Prima facie, from Aseemanand’s confession, as reported above, it appears that [1] it is not a confession of involvement in a conspiracy to either motivate or cause the blast; [2] it is not admissible evidence about the alleged involvement of late Sunil Joshi and Bharat Rateshwar in the said blasts; as the so-called ‘good news’ was not explained at the time, it cannot be convincingly related to the blasts and cannot be called even credible hearsay; [3] there was no reason for Aseemanand to think that the Samjhauta blasts could be the ‘good news’ hinted by late Sunil Joshi; [4] if Aseemanand ‘confronted’ Joshi about the blasts, it would seem he was not involved in the same; and [5] there was no logical reason for Joshi to confess to Aseemanand that he and his men had carried out the blasts.

The fact that groups from two different communities have confessed to the same blasts makes the task of investigating the crimes more difficult. To begin with, the motives are entirely opposite. The jihadi terrorists seek to undermine the integrity of the Indian nation, to soften it for ultimate conquest by Islam (or so they hope). The so-called Hindu groups are allegedly into counter-jihadi activism, to teach a lesson to the community that is to be ultimate beneficiary of jihad. In these circumstances, one can only hope that credible corroborative evidence will be adduced in court to prove the guilt of whichever party the Government in its wisdom finally decides to prosecute.

Pointing to the bizarre situation caused by identical confessions by two different persons for the same crime, Janata Party leader Subramanian Swamy has urged the Prime Minister to quickly clarify which confession the government was accepting and which it was rejecting. He demanded a White Paper on the so-called phenomenon of Hindu terror, and said the government cannot allow Pakistan to make propaganda about Hindu Terror without full transparency on the issue.

Dr Swamy points out that the CBI’s charge that Swami Aseemanand masterminded the attack on Samjhauta Express, the Malegaon and Hyderabad masjids, and other places, conflicts with reports by other agencies at the international level. The US Department of Treasury had previously imposed sanctions on the Lashkar-e-Toiba on the ground that four of its members were behind the attack on Samjhauta Express. The Department informed the “1267 Committee” of the United Nations Security Council that the designated individual members of LeT had not only carried out train bombings in India, but provided support to Al-Qaeda in its nefarious activities. In fact, the UNSC 1267 Committee issued a press release on 29 June 2008 stating that these persons were financed and helped by proclaimed offender Dawood Ibrahim. The CBI had registered an FIR, and LeT operator Safdar Nagori had owned responsibility for the attacks.

As per the confession of April 2008, three SIMI activists – general secretary Safdar Nagori, his brother Kamruddin Nagori and Amil Parvez – revealed that the Mumbai train bombings of 11 July 2006 (which took over 200 lives) and Samjhauta Express blasts of January 2007 (68 dead) were carried out by their group members with help from Pakistani nationals.

The ‘Nagori 13’ were arrested from an Indore hideout by Madhya Pradesh police in March 2008. Nagori reportedly told police that Ehtesham Siddiqui, Abdus Subhan, Tauqeer (believed to be behind the Jaipur, Ahmedabad and Delhi bombings) and Sharif left a SIMI meeting in Ujjain days before the July 11 bombings, possibly because some terrorists from Pakistan had arrived in Mumbai.

At that time, the Mumbai police believed the train bombings were carried out by SIMI in tandem with LeT terrorists from Pakistan. During interrogation, most SIMI activists showed knowledge about other bomb conspiracies across the country. Nagori told investigators that Abdus Subhan had told him that Rahil of Pune was involved in the train blasts; that Nasir was involved in one of the Hyderabad blasts (possibly Gokul Chat stall where 32 persons died); that Muslims were involved in the Malegaon blasts as also the Samjhauta Express blasts where Kamruddin participated. In the Samjhauta blast, the Pakistani agents purchased the suitcase cover from Kataria market, Indore. One Abdul Razak had helped the Pakistanis and had in turn taken help from Misbah-ul-Islam of Kolkata, head of SIMI’s Indore unit.

The arrest of Nasir, trained in Pakistan, in January 2008 led to the arrest of the entire Nagori faction in March.

Now this entire investigation thread stands overturned, and the government appears to be on a wild goose chase in pursuit of Hindu terrorists. Security analyst B. Raman had warned in 2006 that some Hindus could take to reprisal acts of terror against Indian Muslims if the Government did not correct the impression that it was soft on jihadis. While welcoming a thorough probe into alleged Hindu acts of terror, he questioned the motivated leaks made to suit a hidden agenda [http://www.southasiaanalysis.org/papers43/paper4279.html]

Raman notes there have been only four incidents of terrorism in which some Hindus may have been involved; none after Mumbai 2008. He warns of fresh anger in sections of the Hindu community over attempts by Congress and agenda journalists to exploit Aseemanand’s confession to divert attention from the serious threat of jihadi terrorism the nation still faces, and to whitewash the horrendous crimes of jihadis, including the July 2006 explosions in Mumbai suburban trains and even Mumbai 2008.

Disapproving of the manner in which the Mumbai ATS had been making leaks to the media, Raman says any objective person should ask if ever in the history of terrorism a terror suspect (read Sadhvi Pragya) had created evidence against herself by lending her own motor-cycle to plant an improvised explosive device (IED).

A private military school which coaches aspirants for a career in the Armed Forces is being maligned on grounds that some suspects held a meeting in its premises, without explaining if the meeting was to plot specific acts of terrorism or to discuss how to counter jihadi terrorism.

We are told the Samjhauta Express explosions of Feb. 2007 were carried out by Hindus using RDX explosives allegedly supplied by a serving Army officer currently under arrest (read Lt. Col. Shrikant Purohit). But in that incident, two IEDs reportedly attached to bottles containing incendiary material exploded; three IEDs failed to explode and were recovered by railway authorities.

At any rate, at the time of the blasts there was no evidence of RDX, a conclusion shared by many Western experts. Hence the sudden emergence of RDX needs explanation, especially as the army says nothing is missing from its stock – which was allegedly pilfered by Lt. Col. Purohit!

Mumbai ATS lost much of its sheen after it began to hunt for ‘Hindu terror’ and gave the widespread impression that it was working to fix Hindu nationalists rather than to hunt down jihadi terrorists and bring them to justice. The alleged relationship of its slain chief with Congress leader Digvijay Singh, who openly supports terrorists in Batla House and Azamgarh, cannot inspire confidence.

As for the CBI, it is openly berated as the Congress Bureau of Investigation. While the agency is bound to pursue all leads in the blasts, it should not rush to damage lives and reputations built assiduously over decades. Swami Aseemanand had dedicated his life to the tribals of Dangs, who have been hounded by foreign-funded Christian missionaries. Like the murdered Swami Laxmanananda of Kandhamal, he was a bulwark against nefarious conversion activities in the district. Many see his otherwise inexplicable involvement in counter-jihadi reaction – there is no such thing as Hindu terror or saffron terror, not on Hindu bhumi – as part of a larger plot to discredit Hindu individuals and institutions that are in the forefront of the war for the survival of Hindu civilisation in Hindustan.

Arrayed on the other side are Islamic terrorists, armed, trained, and mentored by the ISI-CIA-MI6, with the pusillanimous secular Indian elite serving as foot soldiers and stool pigeons to make India the Hindu version of Iran under Shah Mohammad Reza Pehlavi or The Philippines under Ferdinand Marcos. For the descendants of Manu, there has never been a darker era.

The writer is Editor, www.vijayvaani.com 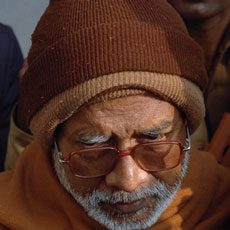