John Maclithon on Indian Politics and why Hindu Dharma will survive

I was surprised when the Congress party gave me a Padma Shri – I am the only foreign journalist to ever get it.  For, in my forty years of political reporting in India, I have always been a vocal critic of the Nehru dynasty. Someone even called me recently: “ a vitriolic British journalist, who in his old age chose to live back in the land he never approved”.

It started with Operation Blue Star. I was one of the few western correspondents who criticized Indira.  As I have said since then numerous times, the attack on the Golden Temple and the atrocities that followed the army operations, produced in all sections of the Sikhs a sense of outrage that is hard today to alleviate. I believed then that the large majority of Hindu India, even if politically hostile to Indira Gandhi, openly identified with – and exulted in – her will to overwhelmingly humble a recalcitrant minority.

As everybody knows, Indira Gandhi helped my fame grow even more, by wanting to imprison me during the Emergency she clamped and finally throwing me out of India for a short while. But the result was that the whole of India tuned in, then and thereafter, to my radio’s broadcasts, ‘The Voice of India’, to hear what they thought was ‘accurate’ coverage of events.

When Rajiv Gandhi came to power, I first believed that he was sincerely trying to change the political system, but he quickly gave-up when the old guard would not budge. I criticized him for his foolish adventure in Sri Lanka, although I felt sorry for him when he was blown to pieces by Dhanu, the Tamil Tiger.  It is in Kashmir, though that I fought most viciously against his Govt and subsequent Congress ones for its human right abuses on the Kashmiri Muslims of the Valley. The Congress Governments tried indeed several times to censor me and the army even took prisoner my Kashmiri stringer, whom I had to rescue by the skin of his teeth. I am also proud that I was the first one to point out then, that the Indian Government had at that time no proof of the Pakistani involvement in the freedom movement in Kashmir. Thus I always made it a point to start my broadcasts by proclaiming that « the Indian Government accuses Pakistan of fostering terrorism», or that “elections are being held in Indian-controlled Kashmir”… As I was so popular, all the other foreign journalists used the same parlance to cover Kashmir and they always spoke of the plight of the Muslims, never of the 400.000 Hindus, who after all were chased out of their ancestral land by sheer terror (I also kept mum about it).

As for Sonia Gandhi, I did not mind her, when she was Rajiv Gandhi’s wife, but after his death, I watched with dismay as she started stamping her authority on the Congress, which made me say in a series of broadcasts on the Nehru Dynasty: “It’s sad that the Indian National Congress should be completely dependent on one family; the total surrender of a national party to one person is deplorable. You have to ask the question: what claims does Sonia Gandhi have to justify her candidature for prime-ministership? Running a country is far more complicated than running a company. Apprenticeship is required in any profession — more so in politics”. I heard that Sonia Gandhi was unhappy about this broadcast.

Then, after President Abdul l Kalam called her to the Raj Bhavan and told her what some of us already knew, namely that for a long time, she had kept both her Italian and Indian passports, which disqualified her to become the Prime Minister of India, she nevertheless became the Supreme leader of India behind the scenes. It is then that I exclaimed: “the moribund and leaderless Congress party has lashed onto Sonia Gandhi, who is Italian by birth and Roman Catholic by baptism”. She never forgave me for that. Yet, today I can say without the shadow of a doubt that when history will be written, the period over which she presided, both over the Congress and India, will be seen as an era of darkness, of immense corruption and of a democracy verging towards autocracy, if not disguised dictatorship, in the hands of a single person, a non Indian and a Christian like me. Truth will also come out about her being the main recipient for kickbacks from Bofors to 2G, which she uses to buy votes, as the Wikileaks have just shown.

Finally, I am sometimes flabbergasted at the fact that Indians –Hindus, sorry, as most of  this country’s intelligentsia is Hindu – seem to love me so much, considering the fact that in my heydays, I considerably ran down the 850 million Hindus of this country, one billion worldwide. I have repented today: I do profoundly believe that India needs to be able to say with pride, “Yes, our civilization has a Hindu base to it.” The genius of Hinduism, the very reason it has survived so long, is that it does not stand up and fight. It changes and adapts and modernizes and absorbs–that is the scientific and proper way of going about it. I believe that Hinduism may actually prove to be the religion of this millennium, because it can adapt itself to change.

4 thoughts on “Italian by birth and Roman Catholic by baptism: John Maclithon” 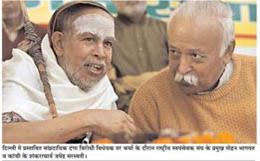