The Election Commission is reported to have opposed one of the major points in the Electoral Reforms demand, viz Right to Recall the elected representative. The Chief Election Commissioner has said that “such a move would bring instability as the losers could start such a campaign from day one.” He further pointed out that “this would also hamper development activities because of frequent elections and imposition of Model Code of Conduct.” Senior BJP leader LK Advani too is reported to  have shared the Election Commission’s view. I beg to differ from them.

Many thinking people think that there is an urgent need to reform our prevalent electoral system. And one of the main points is the Right to Recall the elected candidate. Team Anna, too insists on this point. But Anna Hazare is not the initiator of this demand. If I remember correctly, the Sarvodaya people had made this demand quite a few years ago. I, too, in my weekly Marathi column published on September 4, 2011, had discussed the issue of electoral reforms and one of the points in that article is the right to recall (The complete article is available on www.mgvaidya.b logspot.com). It is reported that team Anna, which included Shanti Bhushan, Prashant Bhushan, Arvind Kejriwal, Manish Sisodia and Kiran Bedi had called on the Chief Election Commissioner and discussed this point. A news item, as published in the media, says that the team has agreed to further examine this point of their demand. It can be inferred that the team Anna is not definite on its demand. I feel,  Anna Hazare and his team should be firm and not vacillate.

I think this right is essential, and it is possible too. If a successful candidate is alleged to have employed fraudulent means and/or has committed breach of electoral rules, his election can be challenged. Number of election petitions are made, and if the elected person is found guilty, his election is annulled and a fresh election takes place. There is nothing extraordinary about this. Election Commission must have handled such re-election processes  a number of times. If an offender is punishable for offences during the election process, why not for offences after the election?

I give two examples. One is of Shibu Soren, who along with his party members had taken bribe from the then Government, headed by PV Narasimha Rao. Did all those JMM MPs-so-called representatives of the people lose their membership of the Lok Sabha? The other example is more recent. In July 2008, quite a few MPs were bribed either to vote for the Government of Dr Manmohan Singh or abstain from voting feigning illness. The matter is sub-judice. What punishment, did those who accepted the bribe money get? They are all free and continue to represent the people. Should people not think of rejecting their representative character?

My question is why should people suffer such representatives? Why should they not have a right to reject them, and elect new ones? I admit that the process of recalling will not be easy. But I have a workable suggestion. I elucidate :

An aplication signed by at least 10 per cent of the total voters, who had cast their vote, in the election that had elected this unwanted person, should come to the Election Commission with a security of Rs 25,000. The EC will then arrange for a fresh election. But, this election will be done by a Special Electoral College (SEC). This Electoral College, in the case of a member of State Legislature, will consist of all members of the Gram Panchayats, Panchayat Samitis, Zilla Parishads and Municipal Committees, falling within the area of that Assembly constituency. It should be noted that all these members are elected representatives of the people. If desired, this SEC may have some representatives of the civil society in the form of all headmasters of recognised primary and secondary schools in that area. If the resolution recalling the elected person gets 60 per cent or more votes, his election shall be invalidate, and a fresh election will be declared. The process of this fresh election will be similer to any by-election caused by death, or resignation or disqualification of an elected person. For the purpose of this election by a SEC, promulgation of the moral code shall not be necessary. In the by-election that will follow, the recalled member shall be debarred from contesting it.

In the matter of a MP the membership of the SEC may be changed. Instead of all members of the village Panchayats, Panchayat Samitis, and ZPs, only the Chairman and Vice-Chairman shall have a voting right. But all members of the Municipal Committees and all Councillors in the Corporations in that area will have the voting right. To add representation of the civil society, all Principals of recognised colleges and all Readers and Professors at the Univercity level, residing in that constituency may be included. If the resolution for recalling the elected member fails to get 60 per cent but gets 40 per cent or more votes, the security deposit shall be refunded. If it gets less than 40 per cent the security deposit will be forfeited. This will serve as a check on frivolous applications.

I don’t claim that my proposal is final or exhaustive. It can be rejected in toto or amended. What I am interested in, is some serious debate on this issue.

Mon Dec 12 , 2011
The challenge to create a worldwide influence of our time tested lifestyle should be accepted by organisations like Swadeshi Jagaran Manch. We were always open to new thoughts but lack the strength to stand with unshakable will and unassailable edifice of spiritual strength. As Swami Vivekananda had said we need […] 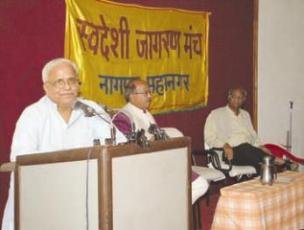