SPOs have been appointed to perform the functions of regular police by protecting themselves and fellow citizens in areas where the environment has been threatened by insurgency. In Jammu and Kashmir, SPOs are the ones who constitute village protection committees that protect village communities from insurgents.

The same mechanism was effectively used in Punjab during the days of militancy. In the ‘SPO system’, the members of the community are empowered to protect the community. Policemen can’t be present in every house or village.

Areas where there is an apprehension of breach of peace and security due to insurgency require the appointment of SPOs.

The Police Act, 1861, provides for the appointment of SPOs. The language of the legislations may be different but various state police legislations have similar provisions. Those familiar with the ground realities will realise the utility of such SPOs who are representatives of the community to protect the community and supplement the normal police administration.

The court’s judgement creates a crisis situation. The state will now have to recover arms from the SPOs. This, in itself, is a daunting task. Every SPO realises he would be on the Maoists’ hit list. He would have only two options left: either join the Maoists or continue to retain arms to protect himself from the Maoists.

Having been identified as an SPO without the backing of the state or arms to protect themselves, these SPOs will now be sitting ducks. The battle against the Maoists has been loaded against the Indian State. Maoists are now laying down terms for grant of amnesty to the SPOs. The vacuum created by their removal can’t be filled easily by the local police.

A reading of the court’s judgement prima facie indicates that the ideology of its authors has prevailed over constitutionalism. A legitimate question that arises is whether the courts enforce the Constitution or ideologies?

The Maoists are no reformers. Their principal objective is to destroy India’s parliamentary democracy and establish a communist dictatorship in India. If the Maoists were to take over India, the judgement’s authors and other well-meaning judges like them will not be manning the courts.

The courts would be controlled by a Maoist ideology.

The judgment itself makes for interesting reading. It’s an ideological rationalisation of why the Maoists exist and fight for their causes and a denunciation of those who fight the Maoists.

“The State of Chhattisgarh claims that it has a constitutional sanction to perpetrate, indefinitely, a regime of gross violation of human rights in the same manner and by the same mode as done by the Maoists,” it states, adding: “Set against the backdrop of resource rich darkness of the African tropical forests, the brutal ivory trade sought to be expanded by the imperialist-capitalist expansionary policy of European powers, Joseph Conrad describes the grisly and the macabre states of mind and justifications advanced by men, who secure and wield force without reason, sans humanity, and any sense of balance.”

The judgement rationalises Maoist ideology by stating: “People do not take up arms, in an organised fashion, against the might of the State, or against human beings without rhyme or reason.  Guided by an instinct for survival and, according to Thomas Hobbes, a fear of lawlessness that is echoed in our conscience, we seek an order. However, when that order comes with the price of dehumanisation, of manifest injustices of all forms perpetrated against the weak, the poor and the deprived, people revolt.”

The judgement approvingly quotes The Dark Side of Globalisation: “Thus the same set of issues, particularly those related to land, continue to fuel protest politics, violent agitator politics, as well as armed rebellion… Are governments and political parties in India able to grasp the socio-economic dynamics encouraging these politics or are they struck with a security-oriented approach that further fuels them?”

The judgement also denounces a contrarian approach: “The culture of unrestrained selfishness and greed spawned by modern neo-liberal ideology, and the false promises of ever increasing spirals of consumption leading to economic growth that will lift everyone, under-gird this socially, politically and economically unsustainable set of circumstances in vast tracts of India in general and Chhattisgarh in particular.”

Undoubtedly, the judges have entered the political thicket. They have chosen a preferred course of economic policy and substituted the wisdom of the executive for their own wisdom of how Maoism is to be tackled. Effectively, the judgement disregards the basic constitutional feature of separation of powers.

The law declared by the apex court binding on all subordinate authorities now is: “Predatory forms of capitalism supported and promoted by the State in direct contravention of constitutional norms and values, often take deep roots around the extractive industries.”

After a detailed ideological discourse, the court goes on to find faults with the deployment of SPOs even though the Centre and the state legislation specifically empower them.

It is held to be violative of Article 14 — equality before the law— as youngsters with little education background from among the tribals are being given these appointments, and violative of Article 21 — the right to life and liberty — as SPOs have low educational qualification and can’t be expected to understand the danger of fighting Maoism. Hiring such SPOs would endanger their lives and the lives of others and, therefore, encouraging them is violative of Article 21.

The payment of honorarium while performing the onerous task is yet another ground for quashing their appointments. If the court found the honorarium inadequate it could always direct a more humane honorarium. If it found that educational qualifications for becoming SPOs were inadequate, it could always direct the state to formulate a policy so that persons with reasonable qualification are appointed as SPOs.

The court failed to realise that lives of ordinary citizens, including SPOs, are threatened by the Maoists. Thanks to the Supreme Court, it is now ‘Advantage Maoists’.

India’s political process and Parliament must seriously consider the consequences of this judgement.

(Arun Jaitley is the leader of Opposition in the Rajya Sabha. The views expressed by the author are personal)

Wed Jul 13 , 2011
Bangalore July 13: “We strongly condemn these cowardly terrorist attacks, killings and injuring innocent people. We heartily sympathise with the families of dead and injured. This is an attempt by anti-national forces to create instability in India. . The central  government  rising above power politics should deal with the issue of terrorism […] 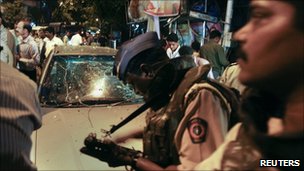