Gorakhpur: On October 13, a day before the three day meeting of Akhil Bharatiya Karyakaini Mandal (All India Executive Committee) of the Rashtriya  Swayamsevak Sangh begins here, Dr. Manmohan Vaidyaji, head of the media arm of RSS spelt out details and purpose of this meet. Dr. Vaidya said the meeting would analyze several ongoing activities of RSS and evaluate issues spelt out in the last year’s meeting.            Dr. Vaidya said that increasing danger from China at our country’s border is sure to be talked about and discussed during this year’s meeting. He expects a resolution for a substantial increase in security at the country’s border, to be passed this year.

Dr. Vaidya said that more members of the executive committee are expected tomorrow and scope of resolutions could further expand after discussions with them. On the issue of corruption, Dr.Vaidya said RSS had already passed a resolution in March wherein it was said that Sangh would give due support to all those organizations and individuals who fight against corruption. Discussions would also focus on organizational work of the RSS. January 2013 would mark the 150th birth anniversary of Swami Vivekananda and Sangh would initiate a series of functions to celebrate his Jayanthi. The Vivekananda Kendra would organize various celebrations that would take place to mark Swamiji’s 150th birth anniversary year. As Swami Vivekanandaji worked to uplift mental and emotional faculties of all countrymen, Sangh would actively support and participate in all celebrations to mark Swamiji’s 150th birth anniversary year. Communal Violence Bill would be yet another issue on which there would be elaborate discussions. Responding to questions on the violent attack on a member from Team Anna, Dr. Vaidya categorically said that RSS does not support any kind of violent attacks. He added that Sangh’s Sar Karyavahji would address the media after the three day meet ends on October 16, 2011.

Thu Oct 13 , 2011
Questioning Anna on RSS is unpatriotic THE TIMES OF INDIA 13 October 2011by Tarun Vijay Nehru honoured RSS for its support and Shastri requested for it. Congress is questioning Anna on RSS as if that’s a sin against the nation. It seems we are not living in a vibrant democracy […] 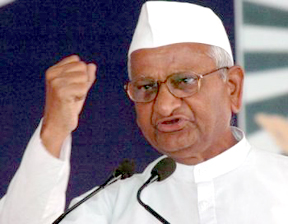