Furious sentiments reflected by the common man on the issue of corruption, proves that corruption has become cancer. But completely corrupt UPA Government in center, shamelessly pretending to fight against corruption, creating illusion to blunt the sharp sentiment of the people. ABVP believes that Central Government by protecting and promoting corruption has lost the faith of people and their by lost moral right to be in power.

It is well deliberated opinion of this National Executive Council of ABVP that A. Raja, Kalmadi and Kanimozi the culprits of different scams in 2G Spectrum and commonwealth games are behind the bars due to directives of Supreme Court, Impressive role of media and people’s agitation not because of initiatives taken by Central government . however Prime Minister Manmohan Singh and Home Minister P. Chidambaram who are chiefly responsible for illegal appointment of CVC are still holding their posts.

The assurance of by Shri Manmohan Singh the Prime Minister of UPA Government which is surrounded by corruption charges and UPA chairperson Smt. Sonia Gandhi that such scams will not occur in future and guilty will be brought to book, endorsas the corruption done by their Government.

NEC of ABVP believes that hard earned income of the country is robbed by corrupt people and deposited in foreign banks in form of black money, while half of the population of the country is surviving below the poverty line. As per the GFI report of “The Hindu”, on an average Rs. 240 crores per 24 hours transferred outside India, in the form of illegal money. Highest amount of money deposited in foreign banks is of Indians. This amount exceeds Rs. 20,00,000 crore. Small countries like Tunisia, Libiya, Peru, have commenced the process of bringing their money back under international treaty. But it is a great irony that Government of India is not even pretending takeing initiative to bring this money back for one reason or another. Criminal like Hasan Ali was allowed to move free for years together, which reflects incompetence of Central Government and its indulgence with corrupt people.

This NEC feels that Government initiative to prepare Jan Lokpal Bill which is obviously due to pressure mounted by the public support gathered by agitation launched by social activist Anna Hazare, is a welcome step. At the same time ABVP deeply believes that Jan Lokpal Bill is not the last option to eradicate black money and corruption. Therefore NEC of ABVP puts following demands as the “Mandate Resolution” before the public:

10. Arrangement shall be made so that the benefit of Tax exemption and subsidy reaches directly to targeted beneficiary.

11. Fundamental changes are required in judicial system in order to make it simple and transparent. Judgment should be delivered within a stipulated time frame

12. Police administration shall be allowed to work independently but its’ autonomy shall be developed such that it is answerable to public and law. Laws developed in British rule shall be amended and made suitable to independent Bharat.

14. Assets of the person should be nationalised offer he is proved guilty of corruption charges.

“Youth Against Corruption” forum has been launched by ABVP so that youth can continue the agitation against corruption. This forum will pull Central Government in witness box by placing on record factual and logical arguments on the issues of corruption before the intellectual class and would bring the youth on roads for agitation.

It is a categoric belief of ABVP that the Prime Minister and Central Government who are snubbed by Supreme Court on the appointment of CVC are directly responsible for all the scams exposed till date. ABVP calls upon the people of the country particularly the youth to launch a nationwide massive movement to root of this most corrupt Central Government and also play an impressive role to change the system and to make India free of corruption.

Wed Jun 1 , 2011
AKHIL BHARATIYA VIDYARTHI PARISHAD National Executive Council meeting 26-29 May 2011, Vrundavan, Mathura Resolution No.-4 Alarming State of Commercialization of Education After the independence, convinced by the importance of education hundreds of colleges are opened all over the nation. In the recent decade the number of professional colleges is increased […] 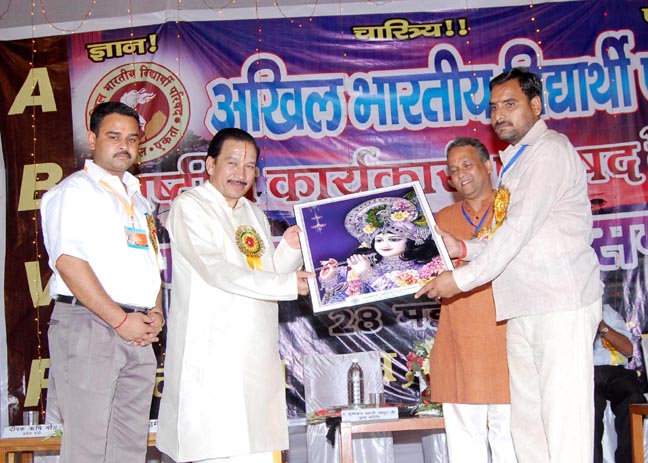