“AT the time when our young generation is fast turning to the western way of life, the value-based activities of Balagokulam are necessity of time. The teaching of ancient Hindu cultural values will bring up the children as responsible, patriotic and cultured citizens for the future,” said Deputy Speaker of Lok Sabha Shri Kariya Munda.

He was speaking at Krishna Darsanam 2011, the 10th anniversary celebration of Balagokulam Delhi in New Delhi on April 10.

Shri Ram Madhav said the country today needs a pro active generation which thinks out of box. “Balagokulam is successfully doing it. All its activities have been designed to ensure total personality development of the children,” he said. Shri Ram Madhav further said in the ancient time Gods incarnated on this land for the protection of dharma but in this Kaliyuga the united force of good people has to do this work. “The RSS through various activities is trying to unite all the good forces,” he said adding that Balagokulam is rekindling this spirit among children.

Founded during the middle of 1970 in Kerala by Shri MA Krishnan, the then editor of Kesari weekly, to counter the cultural deterioration caused by the drawbacks of the education system, the Balagokulam has emerged as a very popular movement not only in India but also in many parts of the world. The then Dakshin Kshetra Pracharak, the late Yadav Rao Joshi and the then Prant Pracharak of Kerala the late K Bhaskar Rao played a key role in making the movement effective. Registered in 1981 as a nationwide cultural movement the Balagokulam is now the biggest children movement.

Kerala unit president of Balagokulam Shri Hareedaran Master said the Balagokulam was basically launched to introduce value-based life-style, which is lacking in modern turners, which has been pushed to the backburner for the past several years. The parents themselves encourage the organisation, since they are conscious of the fact that they hardly succeed in passing on our cultural values and precious traditions to the children. This is the uniqueness of the Balagokulam. Children are developed in such a way that they acquire self-respect and individual qualities and exemplary character.

Rakshadhikari of Kerala Balagokulam Shri Sreedharan Master said the informal education to children through various activities of the Balagokulam creates a healthy atmosphere in their respective families. This happens in two or more ways. The children directly interact with the parents and demonstrate in their homes what they learn in the Balagokulam. The organisation too invites the guardians to participate in several programmes, which are bound to generate an impact on them. The families are expected to observe certain practices like planting a Tulsi in front of the house, consume only vegetarian diet, install Aum in their houses or at the place of worship, receive all guests and visitors with pranam, offer seat and treat them with due respect, install a deity in their house, pray together once a day after switching off the TV/radio, while going out each member will inform elders as to where he/she proposes to go and take their consent, the whole family shall take meals together at least once in a week, if not every day. The meals to be taken after bhojan mantra and donate in kind or cash for charitable works-daanam.

Aiming at the total personality development of the children, Balagokulam also conducts various programmes like training camps or workshops for promoting the special artistic and literary talents, Rakshabandhan festival for promoting harmony, love and brotherhood, Acharyapooja in inculcating the habit of respecting the elders, jnanayajna, house to house contact for propagating the books, etc, Dadhikum-bhanidhi samarpan for promoting sense of dedication and Vishu Gramotsav programmes to create national awareness through children among families.

Shri Hareedaran Master also read out a message sent by Balagokulam founder Shri MA Krishnan. In the message Shri Krishnan said the way Shankaracharya spread the message of advaita to the whole of the country and the world, the Balagokulam should spread all over the country and work among non-Malayalam speaking children inculcating the spirit and values of Sri Krishna. The responsibility of Balagokulam karyakartas is very important to design and develop the framework of Balagokulam in and around Delhi.

During the conference, Prof Omchery NN Pillai, Principal of Sardar Patel Institute of Communications run by Bharatiya Vidya Bhavan and an academician of high repute was offered guruvandanam by the Balagokulam children through padapooja by flowers. Later, 300 Balagokulam children presented Dashavataram dance drama in a very marvelous form.

"Family, Society and Culture" are the backbone of economy says S.Gurumurthy

Mon May 16 , 2011
“Families were bankrupted and made government-dependent. The state takes over the functions of the family. As a result, 40 per cent of US GDP is accounted for by social security. In 2010-11, withdrawals for social securities were more than deposits” from taxes, said noted thinker, economist and writer Sri S.Gurumurthy. […] 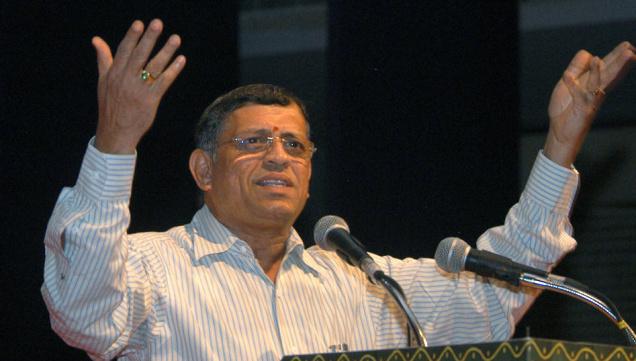