Saji Narayanan, a 53-year-old advocate rooted in the Rashtriya Swayamsevak Sangh (RSS) and trade union movement in Kerala, was elected president of the Bharatiya Mazdoor Sangh (BMS), the country’s largest trade union, this week, marking a shift towards younger leadership in the trade union movement. A member of the trade union delegation to the International Labour Organisation (ILO), he talks to Sreelatha Menon about the future of the union and labour in India. Excerpts:

What changes in the largest trade union of the country with your election as president?
We have moved in favour of young leadership. All national-level leaders are below 65 years old. This discussion has been on for the last six months. And the elections this week saw this become a reality.

But what is the element you would introduce as a person?
I have a trade union background from Kerala where the union is very aggressive unlike the BMS in other parts of the country.

Aren’t the left unions like the Centre of Indian Trade Unions (CITU) and the All India Trade Union Congress (AITUC) better known for their aggression?
CITU and AITUC are strong only in Kerala and West Bengal. They have MPs in their leadership and trade unions are like a platform for politics in those unions. Besides, those unions are smaller. One is in the third position nationally and the other is in the fifth position. We are much ahead. And we don’t have politicians heading our unions. The Indian National Trade Union Congress (Intuc) also has politicians in the top leadership. But they are only half our size. We are present in every district and even in a state like Manipur we are number one.

We are known for reconciliation. We believe in talks and dialogue rather than having strikes in the first place but there is a need for putting up a stronger front than we do now.

You are now turning to unorganised sector workers and contract labour. Why this late realisation that they need unions? Is it because the survival of unions is at stake with the regular workforce shrinking?
Our national congress in Jalgaon this week passed resolutions focusing on these two sectors. But in the second national labour conference we had raised the demand that all contract workers be made permanent after two years. It is true unions are getting weaker. After the nineties, the number of strikes has come down though there has been large-scale retrenchment and labour law violations everywhere. But from this year, we will see a change in the trade unions as we unionise these two sectors.

You have ignored even regular workers in sectors like IT…
Big companies like TCS and Infosys are thriving on abuse of labour and violation of labour laws. Their employees work 14 to 15 hours without being paid overtime. They work like slaves with no rights except their salaries. We are unable to do much because the workers there are not making any effort to reach out to unions. We can do something only when they approach us. We are waiting. Earlier, medical representatives had no protection under the labour laws. They started approaching us gradually and now we have strong unions of medical reps.

We usually develop leaders within the workforce instead of imposing them from outside. So, all that is needed is for workers to approach us and we will train their leaders. Exploitation will persist unless there is an equal relationship of dialogue between employers and employees.

When will this change?
In China, this absence of dialogue between workers and employers has led to what is called gory reactions. In Central China, factories are shut abruptly and workers dismissed. There are no unions and since there is no vent all this ends in violence, which is not reported outside. This has started in India too. What you saw in Greater Noida or Ghaziabad are only examples of such reactions.

When the government does not interfere with the enforcement of dialogue of the tripartite kind, the exploitation and the fear of losing jobs create an insecurity that leads to violence of that kind. In both those cases, it was regular workers who turned violent because they feared they would lose their jobs.

The government recently notified the setting up of grievance redressal committees in every industry. Will that replace unions?
That is not new. There was such a provision in the Industrial Disputes Act. No one enforced it. In Kerala, we always had industrial relations committees. They do not replace unions. The Industrial Disputes Act provides a safety valve for workers especially because contract workers have no security. But what about the unorganised sector? When we were returning after the conference in Jalgaon, we saw men and cattle sleeping in the same vehicles plying in and out of villages there. This is rural India. What kind of reforms have taken place here? Armed rebellion is bound to attract these people who live lives worse than animals. No one is thinking of changes in the unorganised sector, the rickshaw pullers, the vendors, the farm labourers. In the forest sector, we have set up vanvasi unions and they are organising tribals in the entire Naxal belt from Bengal to Andhra Pradesh.

Only the aggression of trade unions is going to change things.

You share all the concerns of the other unions. They marched to Parliament on these issues but you stayed out. Won’t unity yield better results?
The trade union march was political. The Intuc president wants to be a minister and left unions have their own agenda. If they take us for granted and don’t even consult us on dates for the march, we have no option but to stay out. On November 23, we will have a separate march to Parliament.

So won’t you ask other unions to join you?
Of course we plan a trade union conference at which we will consult all unions. We only feel they should have consulted us as equal partners in a common struggle. In fact, unions, whether left, right or centre, differ from their political parties on economic policies. But unions have the same concerns and usually oppose their own governments.

As a workers’ representative at the ILO you must be aware of its persistent queries on lack of inspections in our workplaces. BMS has not been raising this issue much, nor have other unions.
Inspections are discouraged mainly in the National Capital Territory in Haryana, Delhi and Uttar Pradesh because small-scale industries there have political links with Delhi. Though the Bharatiya Janata Party (BJP) has sympathy for traders, BMS opposed it when it came to labour polices in these states. But in other states, inspections do take place.

The ILO may finalise a convention on domestic workers this year though it still does not have one on contract labour. The latter when it was proposed was opposed by India.
That is right. Even the domestic worker convention was opposed by India, which lost face in the last ILO session in June when other countries including China supported it. We, members of the workers’ committee, stood firm and the matter was put to vote and India cut a sorry figure. It was decided to have a convention that is legally binding on member countries rather than just a recommendation that is not binding and which India was rooting for. The government included an NGO, the Self Employed Women’s Association (SEWA), in the workers’ committee in the ILO this time and it was made to take a position against the convention. But it was an isolated voice of dissent.

Fri Feb 25 , 2011
India Today, one of the reputed media of the country has mis-informed its readers that RSS Sarasanghachalak Mohanji Bhagwat will address in its reputed ‘India Today Conclave-2011’. In its website (http://conclave.intoday.in/conclave/conclave2011.php) it has mentioned the name of RSS Chief on March 19th event of Breakfast Session of India Today Conclave, […] 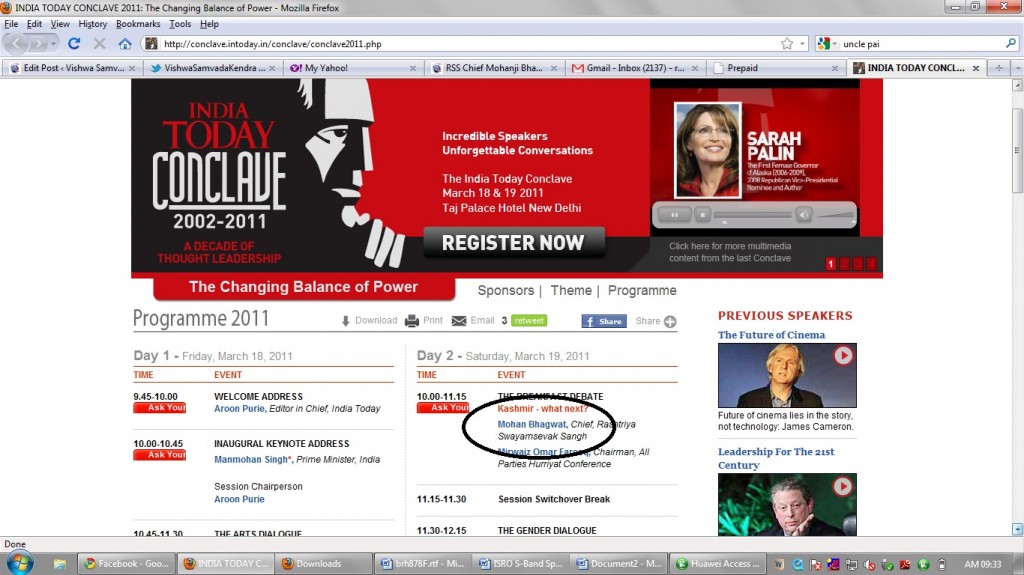