The Congress-led UPA government is rattled by the rising voices against corruption. Having lost credibility completely, floundering for explanations to mounting charges of accumulating sleaze, the Congress Party has unleashed its foul-mouthing spokespersons to defend itself. From the government too, the people who speak for it hardly have any credential worth mentioning.

Spokespersons have now descended to the level of name calling. The activists of the civil society are being vilified by the government and the party. The other day Congress’ Manish Tiwari mentioned the “tyranny of the unelected.” The statement would actually fit Manmohan Singh as he is the selected and not elected Prime Minister and in his second innings in office has resorted to tyranny to silence the voice of protest.

The government bent over backwards to placate Baba Ramdev. It was hoping to use him as a stick to beat Anna Hazare with, to create a rift in the increasingly uniting opposition, fighting for accountability in governance and against corruption. When this hospitality and the razzmatazz failed to impress Baba and he went on fast as scheduled, the government decided to wreak vengeance. The mid-night barbarity in Ramlila Maidan was a result of this thinking. It is an open secret that the man who was at the helm of all these, Kapil Sibal is close to Sonia Gandhi and has become very ‘useful’ for the Prime Minister in fire fighting, whether telecom scam or black money.

As in the case of Mulayam Singh Yadav, Mayawati and Lalu Prasad Yadav, the government set the Enforcement Directorate on Baba to unearth something that will malign him. The UPA has been using the CBI and ED to settle political scores. Did the government know that there were wrongdoings going on with Baba Ramdev’s ayurveda mission? If yes, then why did it keep quiet and worse woo him? If no, then one has to question the timing of the ED inquiry. The media is being fed with stories of hundreds of acres of land gifted or sold below market rate to Baba. All the land and his ayurvedic set up cannot match the land and assets amassed and ruled over by the Gandhi family all over the country.

Anna Hazare and his team are creating a lot of ire for the government. Their insistence that the office of Prime Minister should be included in the proposed Lokpal bill is unacceptable to the government, though it is not able to give any valid reason. In a nation where for centuries the governing principle has been ‘yatha raja thatha praja’ (As is king so are people), the debate is redundant. If a law can apply to an ordinary Indian, it should apply more stringently on people in power, including the head of the state and the government. Political power cannot give immunity to wrong-doing. The draft of the Lokpal Bill prepared under the NDA had included the Prime Minister under its purview.

The UPA has been raising the bogey of RSS to scare the civil rights activists. They ‘accuse’ them of having connection with and backing of RSS and BJP. To the best of our knowledge neither is a banned organisation nor known to function outside the democratic norms. On the other hand, the UPA co-opts people with dubious background, persons convicted and out on bail on sedition charges into government and quasi government bodies.

The point is, the pale mask of honesty has slipped off the face of the Prime Minister. The Congress president who was hiding behind a seemingly impenetrable curtain formed by the coterie, willing media and kow-towing government has been exposed in this round of anti-corruption and black money campaign. While berating Baba Ramdev’s close aide Balkishan for being a foreigner because he is allegedly from Nepal, the Congress general secretary Digvijay Singh forgot that his supremo is an Italian, who till recently did not have an Indian passport and was not a voter in India. The trusts and foundations, like the Rajiv Gandhi Foundation, in the family hands need to be probed for financial and land irregularities. The list of donors to the trusts would have to be made public and the exact nature and work of these power centres would have to be opened to scrutiny.

Congress has been the fountain-head of corruption in independent India. The compilation of scams and loot will run into many pages. But the UPA, I & II, has set a new record in the sheer volume of money involved and the way it is seeking to brazen it out. The government’s behaviour is fascist, using physical and verbal violence on its critics and political opponents. It wants to silence the voices of dissent. It is a classic case of wanting to kill the mocking bird!

Mon Jun 20 , 2011
Bagalakot, Karnataka: June -20: Seva Bharati, a Rashtriya Swayamsevak Sangh initiative for social service has dedicated one more bunch of houses to North Karnataka flood victims. In a meaningful programme  on Monday the newly constructed houses has been handed over to the flood victims at Kotnalli village of Guledagudda district […] 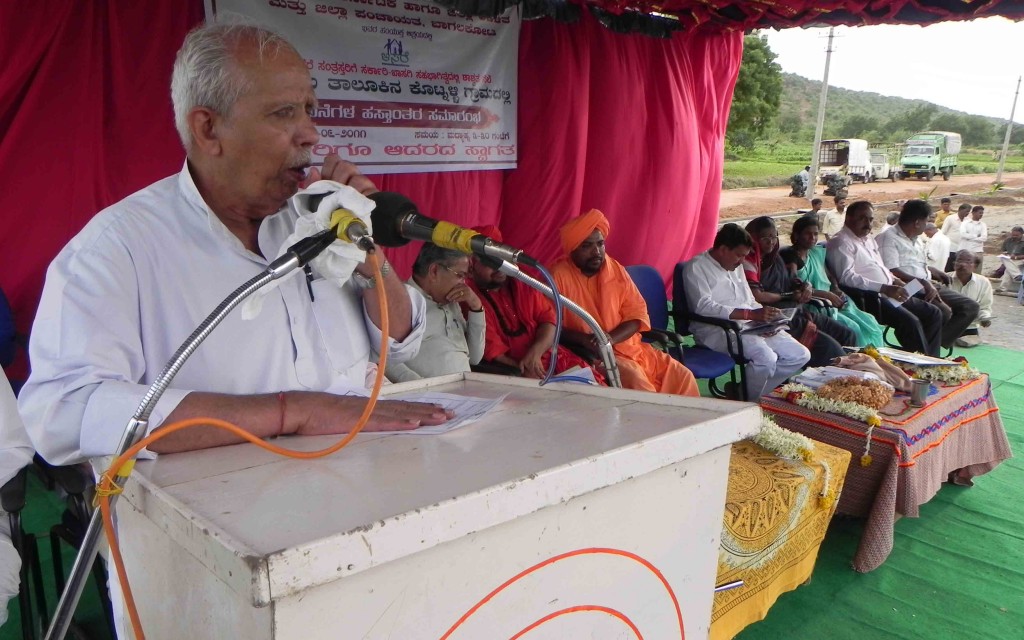