MF Hussain, noted painter who was in exile after threats to his life, died in London. M F Hussain was in national headlines after his controversial nude arts on Bharath Matha , Saraswati and many Hindu goddesses. Maqbool Fida Husain, (born September 17, 1915, Pandharpur, India – died June 9,2011, London, United Kingdom  popularly known as MF, was an artist of Indian origin.Maqbool Fida Husain, the artist who earned fame and controversy over his paintings, died in a London hospital at 2.30 am on Thursday, according to reports from UK. He was 95.

In the 1990s some of Husain’s works became controversial because of their portrayal of Hindu deities in the nude or in an allegedly sexual manner.The paintings in question were created in 1970, but did not become an issue until 1996, when they were printed in Vichar Mimansa, a Hindi monthly magazine, which published them in an article headlined “M.F. Husain: A Painter or Butcher”. In response, eight criminal complaints were filed against Husain. In 2004, Delhi High Court dismissed these complaints of “promoting enmity between different groups … by painting Hindu goddesses — Durga and Sarswati, that was later compromised by Hindu’s. “.

In 1998 Husain’s house was attacked by Hindu groups like Bajrang Dal and art works were vandalised. The leadership of Shiv Sena endorsed the attack. Twenty-six Bajrang Dal activists were arrested by the police. Protests against Husain also led to the closure of an exhibition in London, England.

In February 2006, Husain was charged with hurting sentiments of people because of his nude portraits of Hindu gods and goddesses.

A series of cases were brought against him and a court case related to the alleged obscene depiction of Hindu goddesses in his paintings resulted in issuing a non-bailable warrant against Husain after he failed to respond to summons. There were also reportedly death threats. The artist left the country stating that “matters are so legally complicated that I have been advised not to return home”. Now living in Dubai and London, he continues to stay away from India, but has expressed a strong desire to return, despite fears that he may be arrested in connection with these cases. A recent Supreme Court order has suspended an arrest warrant for Husain. The law ministry has examined half-a-dozen works by Husain and told the government that prosecutors would have a strong case against him if they sued him for deliberately hurting religious feelings.

Fri Jun 10 , 2011
New Delhi, June 8 (IANS)  ‘I was just a scientist, but it was Atal Bihari Vajpayee who found me suitable for the post of the president,’ said former president A.P.J. Abdul Kalam Wednesday. Kalam was speaking at the launch of ‘Samagra Atalji’, a compendium of speeches, photographs, interviews, writings, poems […] 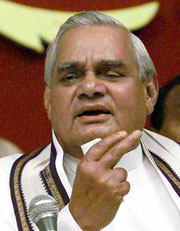