The Chief Judicial Magistrate Court in Allahabad on Friday ordered registration of a case against Congress leader Digvijay Singh for this statement in Ujjain on July 18 calling RSS a bomb making factory.

Singh had said the “RSS was spreading terrorism in the country and it has been making bomb factories.”

The Congress general secretary had earlier courted controversy when he said that he did not rule out the involvement of Sangh in Mumbai serial blasts.

While the RSS and the BJP had slammed him, the Congress had washed its hands off the comments.

“We pity the situation a senior leader like Digvijay Singh finds himself in…. He has started acting like a street bully. We pity him,” RSS leader Ram Madhav had said earlier.

The Congress had said that “unnecessary speculation” did not help when an investigation was going on.

“It would be better if you put this question to him,” was the repeated refrain of party spokesperson Manish Tewari to questions on whether the party endorsed Singh’s remarks on the RSS.

Sat Aug 27 , 2011
ABVP’s anti-Corruption Human Chain MUMBAI: August 27-: Yesterday on 26th August student all over country manifested their enthusiasm in support to anti-corruption human chain by ABVP. Students showed their commitment to uproot corruption from country by forming human chain in more than 350 districts, 800 places in which more than 4 lac students […] 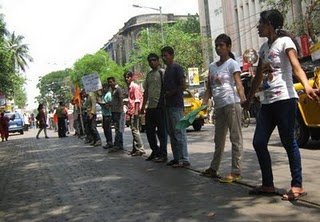