Work for the Safety and Prosperity for all beings in India

A call to youth by RSS Sarasanghachalak Sri Mohan Bhagavat

Hyderabad: A programme was organized at Satya Sai Nigamagamam, Hyderabad by Martyr’s Memorial Research Institute on the occasion of its Bi-decennial celebrations, which was founded in 1991 by Bhavrao Devras an eminent leader of national renaissance. Shri Mohanji Bhagawat took part in the programme as Chief guest and spoke on the topic “Bharat: Challenges before the youth”. He also inaugurated the release  of Rigveda Samhita DVDs (Audio) designed, developed and produced by Shri Seva Bharathi Hyderabad.  Prof.D.Manohar Rao chairman of MMRI welcomed the   guests and the audience.

Shri Justice Parvatha Rao (Retd.) Sanghachalak (Dakshina Madya Kshetra), RSS calling the subject of today’s talk on challenges before the youth as an important and relevant one said that problems of youth are immense which are emanating both from outside and inside the society. The attacks on the society by extremists in the form of Marxists are one of such challenges, he said. Corruption of enormous magnitude involving lakhs of crores of rupees is another major challenge. Criminal neglect of administration and wastage of food grains purchased by F.C.I. are some other issues before us. Even Supreme Court’s order that proper go downs should be constructed for storage is still not implemented. It is strange that Prime Minister feels that there should be no interference by the judiciary. Our youth with extraordinary brilliance are encouraged abroad but not so in the native country with the result that we are deprived of such talented pool. There is so much poverty in the country. While youth in those days sacrificed their lives for the cause of freedom, in the present times not many are joining the armed forces and the lure for quick money is driving them away from joining such jobs. Not many are joining the legal profession and so many vacancies are unfilled in the judiciary. We have to stop this trend by motivating the youth to take up such professions for the cause of the society and the nation. He called upon the youth to take forward their fight against terror.

Release of C.D.: Mohanji Bhagawat then released a C.D. consisting of Rigveda Samhita designed, developed and produced by Shri Veda Bharathi. Due to pioneering efforts for the last 20 years by Dr.Avadhanulu a nuclear scientist associated with Veda Bharathi it became a reality to see 64 chapters with 64 introductions recited in 11 different modes of Rig Veda digitized into one single C.D.

In his one-hour address, Shri Mohanji Bhagawat while appreciating the enthusiasm among the large number of youth present in the hall exhorted them to cultivate values like courage, conviction and hard work.  He said that India’s future lay in the hands of the youth and they should work with vibrant thoughts and not with loudness. He said that youth is reflected more in the spirit of work and enthusiasm than in age. Even after 64 years of freedom, multiple challenges prevail which never existed in the recent history of India. But solutions are more important than challenges.

Mojanji Bhagawas while pointing out that problems are galore with China, observed that national borders were still porous and criticized Government of India for neglecting the border with China, in spite of knowing fully well their intentions. China is aware that India is emerging as a strong nation with a strong potential to grow as a knowledge-based society. Understanding our importance, China started laying roads, railway lines and airports not sparing even the remotest areas along the border.  It is strange that the Government of India has not responded in a fitting manner, he noted.

Shri Bhagawat gave a call to the youth to be on guard against cultural invasion, which is emanating from foreign shores with a concerted move to divide its people and create a rift amongst various communities. Their cruel purpose is to stop India from emerging as a super power. We blindly follow the western customs like Father’s day and Mother’s day. But do we observe Respiration day? Do we need to remember our parents only on these days? India’s rich heritage gives ample opportunity to each one of us to remember and respect our mother and father everyday for the entire life.

Anybody going out from India whichever party they belong to should take a firm and identical stand on issues like Kashmir that it is an integral part of India and is non- negotiable. It is a strange situation to see army being not kept where it is required and kept where it is not required. The vote bank politics along with divide and rule policies being pursued by the Government are playing havoc with the harmony of the nation.  The communal violence bill on which no debate has taken place so far is already kept in the Government website. The members whose credentials are doubtful are in the National Advisory Council to draft such bills as communal violence bill. He added that even the Supreme Court raised questions on the credentials of some members of NAC.

It is unfortunate that those required to show accountability in the administration are escaping from it and the loot by the miscreants continues. The economic scenario is brought to such a stage that 20 to 25% are becoming richer and 70 to 75% are becoming poorer with unchecked inflation reaching alarming proportions of 9.44%.  Such policies are leading to jobless growth. There is a huge competition.  Violence erupts due to such reckless economic policies. Progress and morality should go hand in hand. Blind imitation of western ideas is causing heavy damage to our social moral fabric. We should welcome good things suitable to us and discard those not healthy to us.

Where is moral education? While the number of schools and colleges is rising, the benefit is not reaching common people as can be witnessed through large dropouts in the schools. It is unfortunate that values are falling so low that life is understood to be only food, sleep and sex and nothing more.  He called for educational training reforms with stress on self-respect quoting Dr.Abdul Kalam’s views.

Underlying the importance of unity amongst us, he mentioned that nobody is different from others throughout India with DNA being similar. The mind set should change from identifying only with a particular caste, religion, language and region. With so many differences prevailing, it helps only the enemy.

But there is no need to despair and he reminded of only challenges in front of us and we can move forward by overcoming the obstacles. Indians are most intelligent and are ahead in every international competition. He cited examples of well-educated youth doing social work inspiring others to emulate them. India is a treasure house of knowledge. Progress will be abundant with our enterprising nature, talent, skill and resilience. Even in most difficult times, we have not suffered shortages. We could not be shaken even in the worst economic crisis, which appeared worldwide. He exhorted the youth to emerge from crisis of identity, credibility and character. There is lack of awareness of our history and our real identity. Humanity should be guiding factor cutting across religious lines, he added. He called upon the youth to inculcate self-respect and self esteem in them. The concept of “Vasudhaika kutumbam” is India’s legacy to rest of the world and hence we should not have enemies. But since the world is not free from wrong people we should protect and guard against misdeeds from them in a democratic way without violence.  He gave a clarion call to the youth “Save yourself; correct yourself; Begin with yourself; Know yourself; Understand root of Bharat”. Entire Bharat is oneself. He asked them to keep in mind ‘Bharatiyata’ where good of others should be prime consideration. Without Bharat there is no world and for the sake of world’s survival India should raise. The youth should rise above selfishness by giving time to the society and the nation and make it strong. He asked them to stop wrong activities and make efforts for right action. The general trend of confining to indoors should stop and one should come out to serve for the country’s cause.

One should remember that there is no revolution and there is only evolution. He said that he would feel happy even if one amongst the audience goes out and works in the right direction with the aim of selfless service. He cited examples as to how Buddhist monks went over to China and successfully spread the message of our ancient Dharma. He regretted that efforts were not taken for the protection of Vedas. He reminded Swamy Vivekananda’s eloquent words exhorting the countrymen to set aside Devi and Devata Puja in order to concentrate on nation building. Shri Bhagawat concluded his talk by calling upon the youth to work for the safety and prosperity for all beings in India.

The meeting came to an end with a vote of thanks by Shri G.Yoganand Manjira group chairman.

One thought on “Full text of speech by Mohan Bhagwat at Martyr’s Memorial Research Institute, Hyderabad”

Wed Jul 27 , 2011
New Delhi July 27: Today on 27th July more than one million students participated in the protest call given by ABVP against corrupt central government. Gen. Sec. Umesh Dutt termed this as a mere beginning. In coming future central government has to face huge outrage of students. Government which is badly indulged in corruption should step down otherwise ABVP will start agitation with slogan “Bhrashtachariyon Satta Chhodo”. 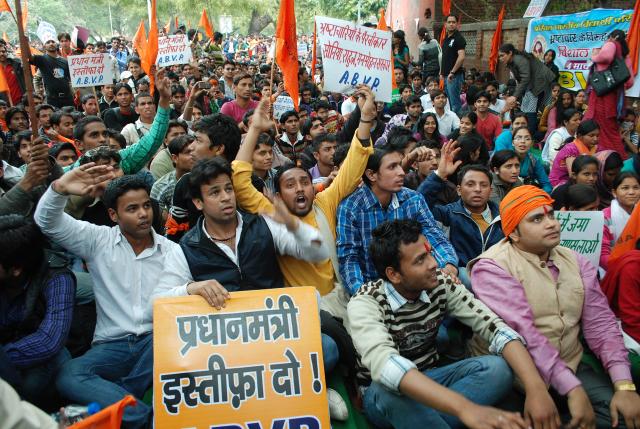