THE INDIA TODAY report is given below.

One of the major considerations of the government to somehow reach a consensus with Anna Hazare was the possibility of a takeover of his movement by a resolute Opposition and the most effective “cultural” organisation doing politics in the country – the Rashtriya Swayamsevak Sangh (RSS).

Besides planting their popular mascot, yoga guru Ramdev, who performed a series of antics at Anna Hazare’s protest site on Friday afternoon, the RSS had passed a resolution exhorting its cadre to actively join the social activist’s movement against corruption.

RSS general secretary Suresh Joshi has written a letter extending support to Hazare. The letter was duly handed over to Hazare by RSS spokesperson Ram Madhav on Friday.

“We have passed a resolution. Our friends and supporters across the country have been asked to actively join Anna’s movement. Corruption is an evil that concerns every citizen of India. Therefore, the RSS lends its support,” Madhav said.

This confirmed what was being suspected in the ruling establishment from the beginning of Hazare’s agitation.

The government was also wary of the issue being exploited for electoral purposes.

Already, J. Jayalalithaa in Tamil Nadu and V.S. Achuthanandan in Kerala have started campaigning on the strength of Hazare’s movement.

Besides, even government officers and credible figures such as E. Sreedharan of the Delhi Metro Rail Corporation and chief election commissioner S.Y.

Quraishi have extended their support to the activist.

Hazare’s supporters, who had warned politicians against joining his movement and turned away Uma Bharati and Om Prakash Chautala from the protest site, had no issues with Ramdev speaking from Hazare’s platform.

The claim of political neutrality in the case of Ramdev is completely hollow as he has been a part of the RSS’s Gau Gram Yatra and various yoga sessions that former BJP organisational secretary and RSS ideologue K.N. Govindacharya helps him organise across the country.

Ramdev is also an enthusiastic funder for the BJP. Yet the yoga guru excels at propagating the anti-politician sentiment that Hazare’s “politically neutral” stance has fanned.

“Hang the corrupt,” he exhorted a loudly cheering crowd. Among the people, too, there was sufficient evidence of the RSS’s presence, with havans being performed at the site.

Activists wearing badges with slogans such as ‘Sonia Bharat Chhodo (Quit India, Sonia Gandhi)’ were signs of a certain level of RSS penetration in the movement. Although a large number of Ramdev posters, which also had pictures of Govindacharya, were removed from the site on the request of Left-wing organisations who have been trying to ride piggyback on Hazare’s spontaneous movement, the most effective bid for the takeover of the movement was being made by the RSS.

The government clearly had no option but to cede ground before the groundswell of Hazare’s support became unmanageable. Mon Apr 11 , 2011
A government which took no time to send interlocutors to talk to anti-national terrorists in their holes in Kashmir without any strings or conditions attached wanted the anti-corruption patriotic people to come to its doors “without any conditions”. Arvind Kejriwal shone as bright as ever, living the Anna ideals so […] 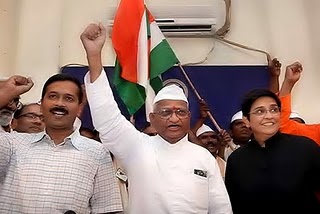