CBI investigators questioned him in connection with several blast cases — Samjhauta Express, Mecca Masjid, Ajmer Sharif and Malegaon. But Rashtriya Swayamsevak Sangh (RSS) National Executive Member Indresh Kumar doesn’t take too kindly to being called an accused. Now 62, Kumar became a RSS pracharak in 1970 after completing his mechanical engineering degree. He started a new RSS campaign, the Rashtravadi Muslim Manch, to connect with Muslims, an unusual step for an organisation known for advocating hatred of Muslims. But for the last three years, Kumar has been mired in controversy and is alleged to have had relations with the accused in those activities of ‘Hindu Terrorism’. When India Today Associate Editor Shyamlal Yadav spoke to him at RSS headquarters at Delhi last week, he looked confident, not defensive. Excerpts:

Q. What do you have to say about Hindu Terrorism and Saffron Terrorism?

We should not relate terrorism with any colour, caste and religion. Terrorism was given birth by Pakistan and other Islamic countries and they term it as Jihad. Jihad is not meant for struggle, war or terror, but that was meant for betterment of society and self-purification. But I think to blackmail Muslim youth emotionally, they gave new term to terror as Jihad. That is why they term it as Islamic terrorism.  Saffron is a symbol of sacrifice. It is a crime to relate it with terrorism. It is also wrong to say Hindu terror.

Q. Then is it right to say Muslim terrorists?

This word was given by them. It was not given by RSS-BJP.

Q. But RSS identifies itself with Hindus, I think that was the reason behind the word Hindu terrorism.

Hindus are everywhere. They are in the Congress also. Hindus are in Nepal, in the United States, they are in Mauritius. They are there across the whole world. Should we say all of them are terrorists?

Q. But has this issue not made the RSS defensive?

RSS is not defensive. We are doing our normal activities as usual. I have said it clearly that one gentleman is Colonel Purohit, other gentleman is Sudhakar Dwivedi alias Dayanand Pande alias Shankaracharya. Third gentleman is Dr RP Singh. Those three had formed Abhinav Bharat. Who are those gentlemen? It is written in Malegaon chargesheet that these people networked for the said activities but if at any stage they went to our shakha, this cannot be a reason to link RSS or its office-bearers to terrorist activities. This looks like a deliberate political conspiracy. How many people were accused for these activities? In Samjhauta and Mecca, they first accused SIMI (the banned Students Islamic Movement of India).

They accepted it in the narco test. Pakistan was made the second accused. Our Home Minister and External Affairs Minister gave proof of involvement of Pakistan on a number of occasions. US agencies are also investigating terrorism cases. They imposed ban on HuJI (Harkat-ul-Jehad-al-Islami) and Lashkar and the cases of Samjhauta and Mecca were mentioned as justification for the said ban. Then wife of Headley (David Coleman) confessed that her husband was behind these blasts. So there were four accused made so far. It is said Purohit and Dayanand Pande confessed that they were behind these blasts. But the investigation is being diverted to some other direction. Now, the sixth confession is of Aseemanand. Three years have already passed and I think that at any cost they want to implicate RSS or its office-bearers. Congress leaders are doing so by misusing some officials.

That is why I said that whatever information you got during investigations, you should file chargesheet. If the government has guts, it should constitute an independent inquiry commission. Media should also be allowed there. But by arresting somebody and by hiding what he said and by leaking selected parts of it, it is completely a conspiracy.

Q. Who is behind this conspiracy? The government? Some investigation agency? Or some particular people? Who are they?

This is a matter of investigation. That is why I say that they should constitute an independent inquiry commission. They should issue a white paper on it. They should file case in court. Whoever will be proved guilty, he will get punishment.  But they are cooking up the stories. If CBI officers stand with the killers and leak the selected information then they have lost their moral, democratic and constitutional rights. Sarkaryawahji (RSS’s Suresh Bhaiyaji Joshi) has written a letter to Prime Minister that the government should find out the background of Purohit, Dayanand Pande and RP Singh. The government itself has said that those people were willing to kill RSS top leaders. And the government has said in media trial that these people wanted to kill even Vice President Hamid Ansari. The question is that why the investigation agencies and government are silent on those findings? I think the truth is somewhere else and they are trying to change that truth.

Q. But who will benefit by implicating you?

They can tell it. Probably they will be thinking that by implicating RSS, they will appease some votebank. Even some foreign power may be behind this. That is why we are demanding an independent inquiry commission.

Q. Do you trust the ongoing investigations?

I have already said that they are cooking some story by misusing some officials of investigation agencies. My comment is clear in this regard.

Q. But you must have mentioned these reservations before the CBI investigators. What did you tell them?

Yes. I have told them. But we are neither investigation agency, nor we want to be that.

Q. But I am asking because they have talked to you?

According to WikiLeaks, Rahul Gandhi has said that he will see the rightists and he is doing so. Digvijay Singh has said that he has proof. It means that either they are running the investigation agencies, or influencing it. That is why I think that this all is a conspiracy.

Q. But if they had to implicate, why have they chosen only you? Why not your other colleagues?

I did not think much of this aspect. But some media has written that one reason behind this could be that I started the Rashtravadi Muslim Manch to connect Muslims with RSS. That was becoming successful in its just seven-eight years of existence.

Q. Did the RSS agree with you when you started Muslim Manch?

It was not my personal project. Muslims from different places were requesting our leaders for such campaign.

Q. How much were you associated with the people said to be involved in these blasts? After all, the question remains that why they chose to implicate you only.

If they (the investigators) select some names and they should ask them that how much they were associated with Colonel Purohit and Dayanand Pande. But they are only behind one name. I asked them that whether they are assigned to investigate the blast cases or they are assigned to implicate RSS leaders and Indresh. I think there was some government agency which was networking Abhinav Bharat with these people. This aspect must also be looked into.

Q. So the Abhinav Bharat people were never related to RSS?

Some of them may have been associated with the Congress also. Maybe some of them have been associated with RSS also. Government is repeating our name again and again and by doing so they gave clean chit to Pakistan. We are innocent and some Congress leaders from the government are torturing us. Whatever investigation is going on, it is a conspiracy. That is why I asked them that what job they were assigned to do.

To investigators and to leaders. Through you also I want to ask this. I ask how can you say you were right at that time? How we can say that you are right now? They may say that time was a mistake. Now, I say they are committing a blunder.

The only lesson I learnt is that I had heard stories of people in power doing  injustice. Now I am realising all these things.

Q. You did not learn a lesson that you must be conscious of the character of people (like Aseemanand) around you?

Till the truth comes out, it is too early to say anything.

Q. Isn’t it true that some people in the RSS who are in favour of violence, leave it and start groups like Abhinav Bharat?

RSS has never taken the path of violence. But see their allegations. They said that we are associated with the ISI. I say that they are the agents of CIA.

Q. And they have also alleged that you took huge money from ISI.

No joke could be funnier than that. If this is an allegation of the government, it must come out with proof.  I can only say that you may take the bio-data of Rahul Gandhi, Digvijay Singh, Manish Tewari and mine. Probably you will find more patriotism and social service in my bio-data. 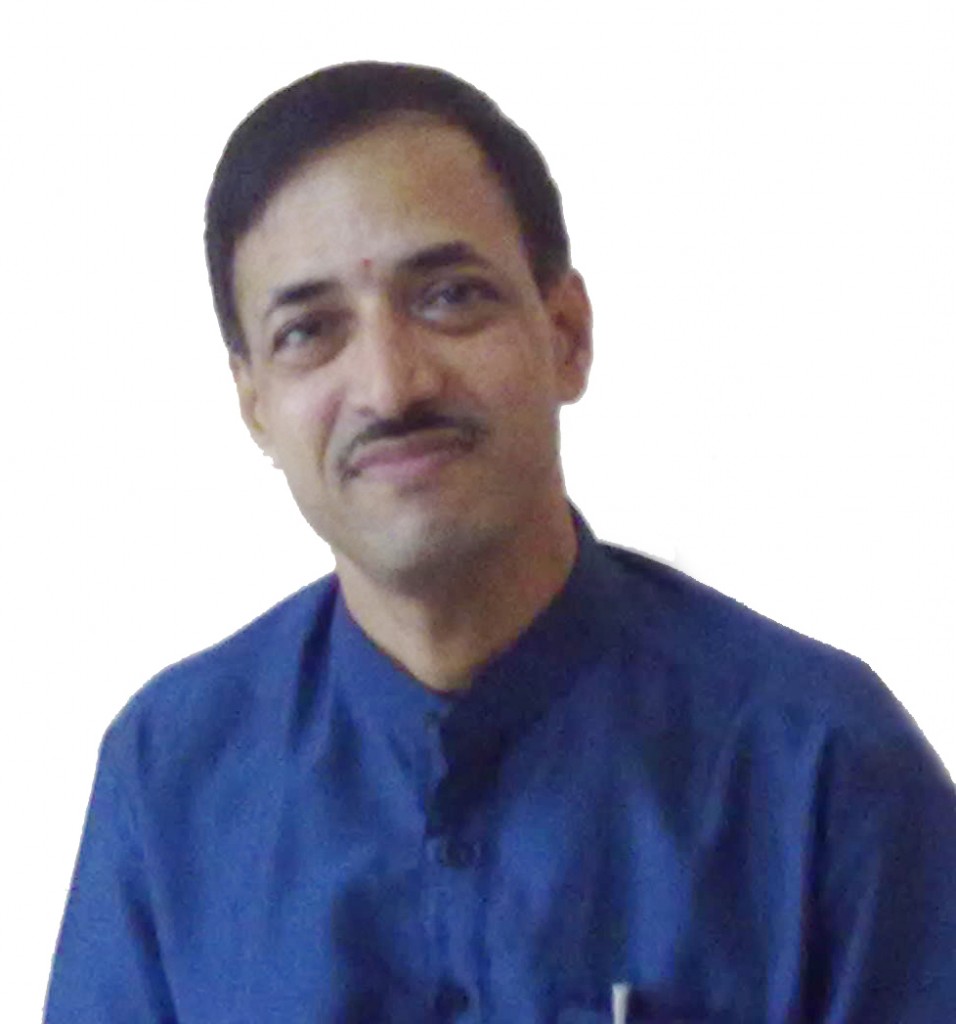