ISRO S-BAND SPECTRUM SCAM: An overview of nepotism and favoritism exhibited by the space organization

The S-band is defined by an IEEE1 standard for radio waves with frequencies that range from 2 to 4 GHz, crossing the conventional boundary between UHF2 and SHF3 at 3.0 GHz. It is part of the microwave band of the electromagnetic spectrum. The S band is used by weather radar, surface ship radar, and some communications satellites. Wireless network equipment compatible with IEEE* 802.11b and 802.11g standards use the 2.4 GHz section of the S-band. Digital cordless telephones operate in this band too. Microwave ovens operate at 2495 or 2450 MHz. IEEE 802.16a and 802.16e standards utilize a part of the frequency range of S-band, under WiMAX4 standards most vendors are now manufacturing equipment in the range of 3.5 GHz. The exact frequency range allocated for this type of use varies between countries.

CAG is yet to complete and publish final audit report.

1 The Institute of Electrical and Electronics Engineers or IEEE (read I-Triple-E) is a non-profit professional association dedicated to advancing technological innovation and defining general standards. It has more than 395,000 members in more than 160 countries.

Space activities in the country started during early 1960s with the scientific investigation of upper atmosphere and ionosphere over the magnetic equator that passes over Thumba near Thiruvananthapuram using small sounding rockets. Realising the immense potential of space technology for national development, Dr. Vikram Sarabhai, the visionary leader envisioned that this powerful technology could play a meaningful role in national development and solving the problems of common man.

Thus, Indian Space programme born in the St Mary Magdalene church, a few meters from the coastline beginning, space activities in the country, concentrated on achieving self reliance and developing capability to build and launch communication satellites for television broadcast, telecommunications and meteorological applications; remote sensing satellites for management of natural resources.

The objective of ISRO is to develop space technology and its application to various national tasks. ISRO has established two major space systems, INSAT for communication, television broadcasting and meteorological services, and Indian Remote Sensing Satellites (IRS) system for resources monitoring and management. ISRO has developed two satellite launch vehicles, PSLV and GSLV, to place INSAT and IRS satellites in the required orbits. ISRO operates under the leadership of its chairman reporting to Department of Space (DoS). DoS comes directly under the Prime Minister of India.

Antrix Corporation Limited is a wholly owned Government of India Company under the administrative control of the Department of Space, Government of India. Antrix Corporation Limited was incorporated as a private limited company owned by Government of India, in September 1992 as a Marketing arm of Indian Space Research Organization (ISRO) for promotion and commercial exploitation of space products, technical consultancy services and transfer of technologies developed by ISRO. Another major objective is to facilitate development of space related industrial capabilities in India.

As a commercial & marketing arm of Indian Space Research Organization (ISRO), Antrix is engaged in providing Space products & services to international customers worldwide. Antrix, which is an INR 950 Cr. Company in 2007-08 got the “Miniratna” status by the Government of India in 2008.

With the versatility of products and services being marketed, Antrix caters to a prestigious clientele including some of the leading space companies across the globe – EADS Astrium, Intelsat, Avanti Group, World space, Inmarsat, World Sat, DLR, KARI, Eutelsat, OHB Systems and several other Space Institutions in Europe, Middle East and South East Asian countries.

Devas Multimedia Pvt. Ltd. (Devas), an Indian company headquartered in Bangalore, was founded in 2004 by a team of satellite entrepreneurs and executives. Devas has led indigenous innovation in the arena of satellite communications and technologies to establish a next-generation national satellite system that provides vital services to the masses and government agencies across India. The Devas system planned to deliver applications for rural development, e-governance, emergency communications, remote connectivity, and strategic services.

1973 – Joined ISRO and held various senior techno-managerial positions and played a key role in developing IRS and INSAT programs and operating its fleet of satellites.

2005-2006 – Heading the International Asian Sales division of GeoEye, a leading satellite imaging company providing secure geo-spatial data to the US Government. (Another scam here? Selling of maps from India to outside world!)

He has also held positions at Goldman Sachs, a top-tier investment banking and management firm.

1998-2004 – Vice President, Operations at WorldSpace India, a pioneer in Digital Satellite Radio. While at WorldSpace, he led the development of emerging satellite-based applications and technologies, including mobile platforms and deployment of audio broadcast services in India.

How scam came into light

ISRO and the Department of Space have scored many successes and enjoyed a good, clean reputation over the decades. Fortunately, in late 2009 some outraged insiders blew the whistle on the secret deal — so secret that ISRO’s chief, K. Radhakrishnan, had to admit at a press conference on February 8, 2011 that for reasons that were being “reviewed” internally, ISRO failed “explicitly” to inform the Union Cabinet that GSat-6 and GSat-6A were customer-specific satellites that would be “predominantly used for a novel and commercial application developed by Devas Multimedia in association with global experts.”

But nothing much happened until ‘Business Line’ published its report in May 2010, which the The Comptroller and Auditor General (CAG) followed up conscientiously despite the bureaucratic hurdles placed in its path. Among the concerns registered by the CAG in its process of enquiry were the following: S-band spectrum was being given away without inviting competitive bids; organisational control systems were not followed; the Prime Minister’s Office, the Cabinet, and the Space Commission were not properly informed about the contract details; public resources were being diverted to building two customer-specific satellites; and the contract terms deviated from the terms of previous contracts entered into by ISRO and Antrix.

Armed with secret knowledge of what ISRO could do for it by launching customer-specific satellites to make available at a throwaway price a large chunk of S-band spectrum, Devas Multimedia — a venture founded in 2004 at the initiative of former officials of the Indian space programme and involving foreign investors — thought it had struck gold. In July 2008, it even sold a 17 per cent stake to Deutsche Telecom AG for $ 75 million (around Rs. 318 crore at the time) and over the next year was clearly looking forward to a time of unrivalled growth in valuation.

CAG suspects a scandal in the allocation of S-band spectrum and is reportedly investigating losses worth Rs 2 lakh crore in the scam. Department of Space and ISRO are under the scanner over the S-band spectrum.

The alleged scam is related to a deal between ISRO’s commercial arm Antrix Corp and Devas Multimedia. ISRO is accused of allocating to Devas 70 Megahertz of scarce S-band spectrum for a 20-year period. The CAG was alerted because unlike in earlier contracts, ISRO placed no restrictions on Devas Multimedia for onward leasing of spectrum, which means the company could make huge amounts of money by sub-leasing its privileges.

The loss due to this deal between ISRO and Devas Multimedia has been estimated to be about Rs 2 lakh crore. Deal includes custom made two-communication satellites (GSat-6 and GSat-6A) and 10 transponders will be used for commercial purposes. Department of Space comes directly under the Prime Minister. This is just not loss of revenue to the Government of India exchequer; this is a rare spectrum, that’s a national asset.

Its shame on our Prime Minister to tell press openly that he has very less control and he has to loosen grip for Government to sustain. His open confession indicates he is just a puppet in the hands of politicians. He is trying to change the air by talking about reforms as usual instead of strongly condemning the scams and sending those involved to jail. All money that was looted has to be recovered.

If we carefully see the chronology it was evident that PM and cabinet was very much aware of the deal between Antrix and Devas. Infact, Cabinet approved the Antrix-Devas deal on 4-Dec-2005. PM lied openly to the Nation about this deal on 24-Feb-2011 saying ‘Cabinet not informed of S-band allocation in Antrix-Devas deal’.

BY:  Information Compiled and Presented by BJP Karnataka IT Cell, Contact – itcell.bjpkar@bjp.org

Sat Feb 26 , 2011
Anant Pai Mangalore, popularly known as Uncle Pai, was an Indian educationalist and creator of Indian comics, in particular the Amar Chitra Katha series in 1967 passed away on February 24th, 2011. Along with the India Book House publishers, and which retold traditional Indian folk tales, mythological stories, and biographies […] 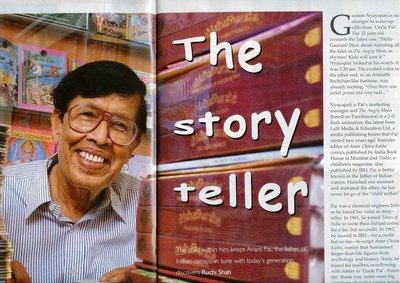