“Families were bankrupted and made government-dependent. The state takes over the functions of the family. As a result, 40 per cent of US GDP is accounted for by social security. In 2010-11, withdrawals for social securities were more than deposits” from taxes, said noted thinker, economist and writer Sri S.Gurumurthy. Yesterday he was  delivering his conclusive talk  of a lecture series on “Indian Economic Model-Sociological, Cultural and Economic Differentials” in Bengalore. The three day lecture series began on 16th May and  was jointly organized  by Bangalore University(BU) and Centre for Educational and Social Studies(CESS) at Jnanajyothi Auditorium, Central College Campus, Bengaluru.

Gurumurthy added that, the Indian economic and policymaking establishment, “being avid importers of Western theories”, has not taken note of how the “near collapse of the global financial system in 2008 has thrown up several questions concerning the very discipline of economics. We have an Indian model, but we need to start recognising it, rather than being a mere carbon copy of the West”

He traced the 2008 crisis to the social and “cultural collapse” of the US, as a result of which it was transformed from the largest investor and lender in the world in 1976 to the biggest borrower today.

He pointed out that India’s growth story can’t be categorised as a ‘rags to riches’ one, but rather of an empire wanting its former glory back. In 1820, India contributed 18% to the world’s gross domestic product (GDP); but this reduced to a mere 1.5% by the end of that century. Gurumurthy, rated as the 17th most powerful person in India in 2005, said its high time India resumed the thinking process where it once left off. Until the 19th century, India and China were the main drivers of global economy.

While in the United States of America, 55% households invest heavily in the stock market, this figure is 7% in Japan, and an even lower at 2% in India. Gurumurthy suggested that there is no universal economic model, it is behavioural factors that make a formal economic model. “Family-led societies like Japan and India will not risk their income in something like stocks, they prefer safety, which is why our economies are bank-led investments,” he added.

The arrangements are also made at the venue for the sale of various books of  S.Gurumurthy and of other renowned economists.

Mon May 16 , 2011
Rashtriya Swayamsevak Sangh(RSS)’s saga of transforming lives of millions continues to grow stronger and stronger by the fast passing days. Here is an inspiring story of a beggars family, which went through tremendous development after coming in contact with . This is another example of silent transformation taking place […] 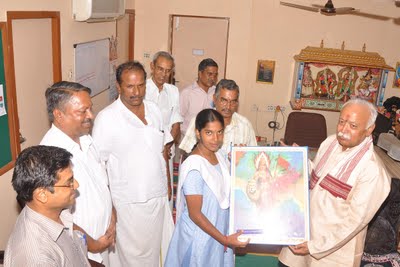