Mauritius: Government of Mauritius in June 2011 has passed a bill for Spoken Sanskrit in it’s National Assembly.

You can visit this site to see as to how Sanskrit as a language can bind people of Indian origin together in a distant land as has it been the chief reason in proposing and passing this bill :
http://www.gov.mu/portal/goc/assemblysite/file/bill1110.pdf 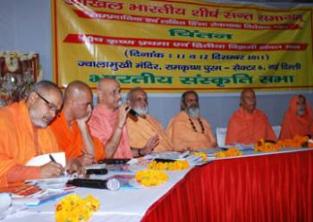