A book on the Rashtriya Swayamsevak Sangh(RSS) by a Muslim author? It may sound a bit far fetched but the book, in Kannada, is set to hit the stands in a week’s time. The work is authored by none other than the lone Muslim face in the B.S. Yeddyurappa government and minority welfare minister, Prof. Mumtaz Ali Khan.

He told Deccan Chronicle that the book will try to demystify the misconceptions attached to the RSS and the myths propogated by the so-called secular parties. “It is exactly this misunderstanding between communities like Muslims and the RSS which inspired me to write the book,” he explained.

The book — Naa Kanda RSS (RSS which I have seen) — will focus on two diametrically opposite aspects of RSS functioning. “In the first part, the book will briefly discuss the core ideology of the RSS that was laid down by Madhavrao Sadashivrao Golwalkar, popularly known as Guruji in RSS circles, and another founding leader, Dr Keshav Baliram Hedgewar.

These two personalities have never in their life, discussed or criticised any religious group. All their energy was spent on organising the nation on the basis of the single nationhood concept. They never spoke or propagated any ill feeling towards any community. This needs to be told to all Muslims openly as they have been misguided due to the Congress party’s calculated campaign in the last 60 years,” he said.

In the second part, the author interprets how, in their attempt to to counter the Congress, a section of RSS leaders deviated from the core ideology to launch a campaign against minorities.

“The RSS is being branded as a communal organisation only because of the actions of a section of the lower RSS cadre, who try to blow every sensitive issue out of proportion. This happened due to the lack of proper education about the core ideology itself among lower cadre. Besides this, a large section of Muslims are not educated and do not know what the RSS is and what their teaching are. This has led to a deepening of the mistrust between the two biggest communities in the country. As an author, I am trying to bridge this gap by highlighting Dr Hedgewar and Guruji’s statements on sensitive issues like the Common Civil Code and conversions. Both of them had simply stated that their utmost concern was to unite the nation,” he said.

Tue May 3 , 2011
Puttur, May 3: Managing trustee of Dharmashree Foundation, Eshwaramangala, Nanya Achuta Moodettaya, announced that Vishwa Hindu Parishat’s international president, Ashok Singhal, has been chosen for the fourth ‘Dharmashree’ award being given annually to those who have rendered meritorious services in the fields of religious, social, and other sectors. He was […] 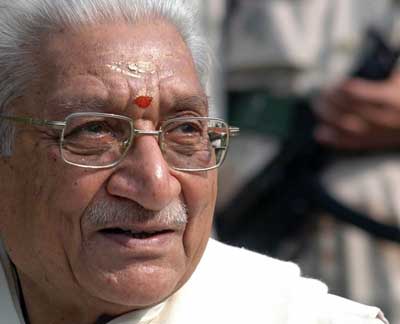