Government has decided to harness renewable sources of energy to maximum possible extent to solve the nation’s power shortage, Chief Minister Narendra Modi while inaugurating the plant, said the State is set to become the ‘Solar Capital of the World’.

He was inaugurating the 30 MW solar power project in near Gunthawada village in Kankrej taluka in Banaskantha district, bordering the Rann of Kutch. The plant set up by Mozer Baer Green Energy Company on 320- acre at a cost of Rs 465-crore in the private sector was commissioned in four months.

While the Centre could not start any solar plant even after announcing its solar power policy,  Modi said, Gujarat has set up four such projects, including one at Charnaka.

Modi said the world’s largest solar park combining the vast stretches of land with ample supply of sunrays is also coming up in the region. The initiative should go a long way in solving the coal shortage. He said that Gujarat has already succeeded converting disasters into opportunities, as Kutch became the fastest growing district in the country during the last decade. Gujarat’s 1,600-km long coastline is humming with a number of seaports. And now it is converting the arid Kutch, Banaskantha and Patan districts into prosperous power producing regions.

He recalled that Gujarat was a power deficient state but today distributing 24-hour electricity to all the 18,000-odd villages in the state. With proper conservation and management of water and electricity, he said, Jyoti Gram Yojna has changed the socio-economic conditions of Gujarat, creating a mass awareness too.

While the Centre has been reduced to a power-corrupt government amidst zero development, Modi said, Gujarat has shown how power could be utilised for all all round growth. The state has undertaken new initiatives in recycling biomass and agro-waste.

Special interview on national issues with Rajnath Singh by ORGANISER

Sun Dec 4 , 2011
Our opposition to FDI in retail sector is total BJP chances are bright in UP Buoyed by the tremendous response to the Jan Swabhiman Yatra in Uttar Pradesh which covered 61 Districts and 375 Assembly segments, the former BJP chief Rajnath Singh feels that the BJP is bound to emerge […] 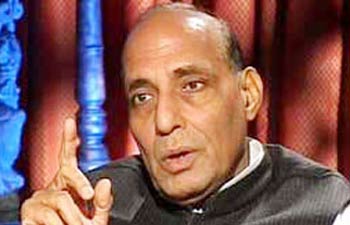