LONDON: British prime minister David Cameronhas described the Arcelor Mittal Orbit, a giant steel tower built for next year’s London Olympics, as “another Hindu first for Britain” . The tower was completed on Friday. The £23 million Orbit, Britain’s tallest sculpture, was conceived in a conference centre’s restroom, where Mittal, the India-born steel tycoon, and London mayor Boris Johnson bumped into each other.

Johnson, a former journalist calls the 115m high piece of swirling metal a “hubble bubble” . Some see it as a twisted Eiffel Tower after a nuclear attack; others as a catastrophic collision between two cranes. Its double-decker viewing gallery and cafe are bound to become a major attraction during the Olympics . The lift up to these facilities , too, will wind its way to them, rather than going straight up.

The Orbit received a hostile and confused reaction at first; yet it has been devised as a sustainable piece of art that will live on for decades , perhaps centuries, after the Olympics. The final structure is 50m shorter than originally planned, as the project had to be delivered strictly within budget. Environmentalists would be pleased that 65% of the raw material used was recycled from scrap lying about at 38 ArcelorMittal’s plants around the world. It was then rolled and cut by computer-guided machinery and re-constructed like pieces of a massive Meccano.

Mon Oct 31 , 2011
NAGPUR: Rashtriya Swayamsevak Sangh (RSS) chief Mohan Bhagwat is continuing his tirade against the UPA government for what he terms its ‘failure to effectively counter China’. “Our image in the international arena is that of a meek nation,” he said while delivering a talk organized by Bharatiya Vichar Manch. Bhagwat appealed to critics of […] 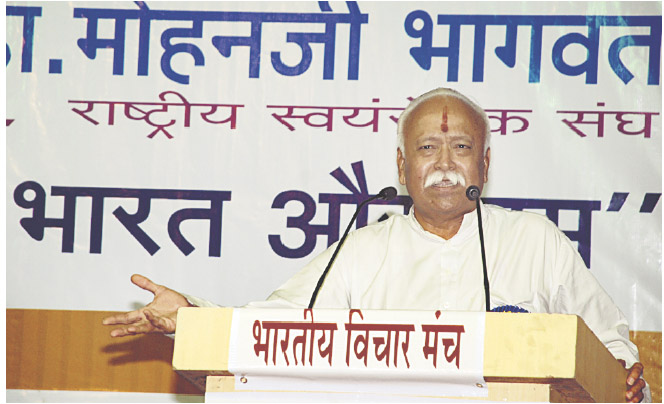