Skip to content
WASHINGTON: Osama bin Laden, the glowering mastermind behind the September 11, 2001, terror attacks that killed thousands of Americans, was killed in an operation led by the United States,President Barack Obama said on Sunday. “Tonight, I can report to the American people and to the world that the United States has conducted an operation that killed Osama bin Laden, the leader of Al-Qaida, and a terrorist who’s responsible for the murder of thousands of innocent men, women and children,” Obama said in a surprise late night White House address.

The world’s most wanted man had been killed in a Pakistani compound in an operation on Sunday, which had been carried after cooperation fromIslamabad, the US leader said.

Obama said in the historic address from the White House that he had directed the US armed forces to launch an attack against a compound in Pakistan on Sunday acting on a lead that first emerged last August.

“A small team of Americans carried out the operation with extraordinary courage and capability. No Americans were harmed. They took care to avoid civilian casualties.”
A jubilant crowd gathered outside the White House as word spread of bin Laden’s death after a global manhunt that lasted nearly a decade.

“Justice has been done,” the president said.

The development comes just months before the tenth anniversary of the September 11 attacks on the World Trade Centers and Pentagon, orchestrated by bin Laden’s al-Qaida organization, that killed more than 3,000 people.

The attacks set off a chain of events that led the United States into wars in Afghanistan, and thenIraq, and America’s entire intelligence apparatus was overhauled to counter the threat of more terror attacks at home.

Al-Qaida organization was also blamed for the 1998 bombings of two US embassies in Africa that killed 231 people and the 2000 attack on the USS Cole that killed 17 American sailors in Yemen, as well as countless other plots, some successful and some foiled.

SOURCE: THE TIMES OF INDIA
http://timesofindia.indiatimes.com/world/us/President-Obama-confirms-death-of-Al-Qaida-leader-Osama-bin-Laden/articleshow/8139886.cms

Mon May 2 , 2011
Mumbai The Governor of Maharashtra K. Sankaranarayanan presented the Seva Bharat Puraskar on the Dharmadhikari of Shree Kshetra Dharmashthal Padma Bhushan Dr D Veerendra Heggade for his immense contribution to nation building through social service.  The award was presented on the occasion of the Silver Jubilee celebrations of Seva Bharati […] 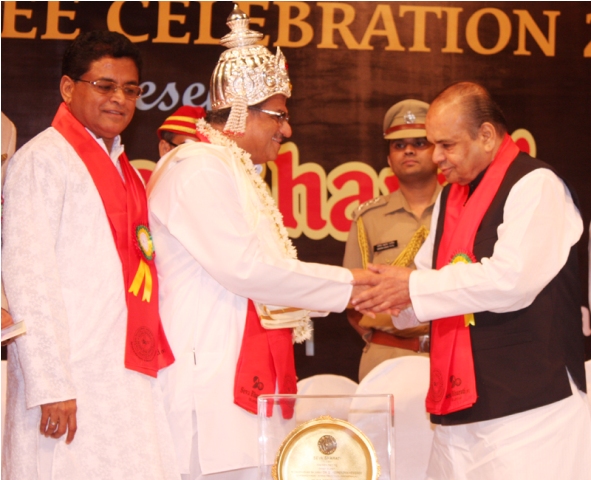