Public discourse taking place with regard to the involvement of the RSS in the anti-corruption movement is ill-intentioned and betrays a political conspiracy to weaken the movement.

Sri Anna Hazare is a man committed to noble ideals. He has been leading a massive popular movement against corruption in the country. Entire credit for the success of this movement goes to him only. Me and thousands of other activists of the country are familiar with and inspired by the ideas articulated by him on several occasions and the developmental activity undertaken by him. In his reply to the redundant controversy raked up in a conspiratorial manner by the General secretary of the Congress Party, Sri Anna had made some comments on the RSS Chief Sri Mohan Bhagwat and also indicated that he viewed the letter written by me in support of his movement as a conspiracy. These views, which were published widely in the media, go beyond my comprehension and cause immense pain to me.

It is tragic that a person of Anna’s stature too has got influenced by narrow political conspiracy. The views expressed in his letter would prove detrimental to the anti-corruption movement only. It will be most unfortunate.

The Swayamsevaks of the RSS along with millions of countrymen genuinely aspire to see a Bharat completely free of corruption. It is the paramount responsibility of the leaders of the anti-corruption movements to safeguard them from narrow and low-level conspiratorial politics.

The general public which plunges into such movements fired by the spirit of patriotism gets disturbed by such controversies. Hence the leadership is expected to be vigilant. Who will be responsible if the people feel disillusioned and get disheartened? All the nationalist forces should close ranks to defeat such machinations. Country can expect to achieve freedom from corruption only when the movements reach their logical ends successfully.

Sun Oct 16 , 2011
Ram Madhav writes- ‘REANGS – VICTIMS OF RELIGIOUS PERSECUTION IN MIZORAM’ They are popularly known in the North East as Reangs. They are the non-Christian tribe, whose original name is Bru. They inhabited the southern parts of the Christian dominated state of Mizoram. Being non-Christian in a Christian state had […] 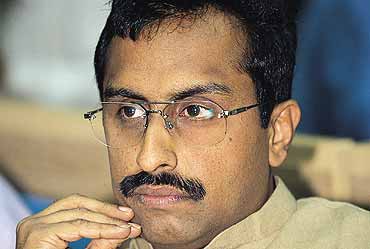