CAPTAIN Swaran Salaria is the founder of Trig Guardforce Limited, the security company, which has pan-India presence with 48 offices throughout the length and breadth of the country. With the purpose of taking his inputs on how the private security guards can play a meaningful role in the maintenance of internal security of the country, I met him.

He said in case of any offence being committed somewhere, police first of all picks up the private guards deployed at the venue and do not stop there; even the owners of the security agencies are arrested for no fault of theirs. He lamented that instead of converging its energies to apprehend the criminals, the police authorities find private guards as easy targets and incessantly trouble them. He said if the law enforcement agencies develop faith in the private security, they can source very useful information from the latter. For example, the guards deployed at various commercial and residential premises who keep a constant vigil on the surroundings, can be depended upon for various leads and the authorities can take their inputs on the suspicious activities happening in the concerned area.

Shri Salaria told that the private security sector is the largest employer of the ex-armymen. In his own company, most of the senior managers have army background and the rigorous training of the army and exemplary discipline imparted by the armed forces to its personnel holds true in the retirement period also and said qualities have indelible impact on the working of the organisations where ex-armymen are employed. He said he himself is very much proud of his army background and credits the same for many of his achievements in life.

He regretted that the government does not allow the private security agencies to have the firing ranges and in the absence of the same, rifle training cannot be imparted to the personnel. He agreed that if the security guards are adequately trained, many criminal activities like those of burglary and thefts can be curbed. He emphasised that the usage of surveillance equipments should be augmented and the exercise can prove to be very useful in keeping an eye on the suspicious elements and deterring the individuals from breaking the law.

Shri Salaria told that we must learn from the western countries the ways and means to maintain internal security. He said his company is entering into a joint venture with a reputed Israeli company to provide world-class security to its clients in India. He reiterated that if the government renders support to the deserving security agencies, there can be qualitative improvement in security scenario of the country. At present, he said, many non-deserving people are given licences to run the security agencies and the development is proving detrimental to the overall security scenario. According to him, there must be some benchmarks, which should be adhered to before issuing the licences to the new aspirants.

Shri Salaria is the member of National Executive of the BJP and connected with many social bodies and believes in the inclusive development of the country. According to him, corruption is the biggest malaise, which has been plaguing this great land and he believes that the change has to be initiated at the micro level of the society. He stressed that people of this country should value those politicians who have the impeccable track record of serving the people and the development will inspire more service-oriented politicians to enter the arena of the politics.

Thu Sep 15 , 2011
RSS workers at rescue operations at Chitheri A sleepy village (Chitheri) in Tamilnadu-Vellore District which is 90 kms off Chennai went on deaf when two trains, the Chennai Beach-Vellore Cantonment Mainline Electrical Multiple Unit (MEMU) train crashed into the stationary Arakonam-Katpadi passenger from behind while it was waiting at the signal. […] 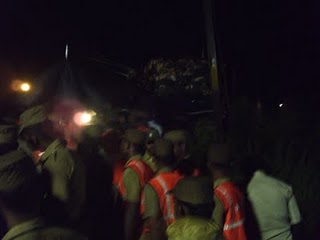