Newdelhi: “NANAJI Deshmukh was indeed an extraordinary personality. He, thro-ugh practical deeds, taught the people what the RSS is. Through this book he explained the Sangh ideology to the masses,” said RSS Akhil Bharatiya Pracharak Pramukh Shri Madan Das. He was releasing the revised edition of Rashtriya Swayamsevak Sangh, a book written by Nanaji Deshmukh in 1979, in New Delhi on August 6 at Deendayal Research Institute.

The Forward of the revised edition has been written by noted journalist Shri Ram Bahadur Rai. Deputy Speaker of the Lok Sabha Shri Kariya Munda, senior BJP leader Shri Bal Apte and president of Deendayal Research Institute Shri Virendrajit Singh were also present on the occasion. The book is in Hindi and has been published by Prabhat Prakashan. Prior to the function, a documentary, Vilakshan Nanaji, was shown. Former Governor of Goa Shri Kidarnath Sahni and many other distinguished personalities were also present on the occasion.

Shri Madan Das further said the RSS played a key role in generating agitation against the Emergency. Ninety per cent of its swayamsevaks were in jails and the remaining were mobilising people remaining underground. “It was the impact of the RSS activities that the noted communist leader Madhu Limaye then wrote to his wife not to wonder if he came out from the jail wearing RSS nikar,” he said adding that many people were working to weaken the Janata Party but Nanaji was sincerely making efforts to keep it united.

Shri Ram Bahadur Rai said the sequence, facts and reasons for the division of Janata Party cited by Nanaji in the book are fully correct. “Before writing Forward of the book, I have gone through many books on this issue and found what Nanaji wrote is fully correct. Apart from giving correct information about the division of the Janata Party, Nanaji also explained the RSS ideology perfectly,” he said.

Referring to Janata Party, Shri Rai quoted the then Janata Party president the late Chandrasekhar who said the person who cooperated him the most in the functioning of the Janata Party was Nanaji Deshmukh, though he had been cautioned by some of his colleagues about Nanaji. “Chandrasekharji told me in clear words that Nanaji was really a dependable person,” Shri Rai pointed out.

“After Chandrasekharji relinquished the post of Prime Minister I got an opportunity to meet him. I asked him what he learnt after becoming Prime Minister. He said he came to know that Sardar Patel was really a patriot and Pt Nehru was not. Another thing that he learnt while being Prime Minister was that if there is any threat to the security of the nation, the RSS would be the first to come forward to defend the country,” Shri Rai said.

“The qualities that Nanaji possessed are still there and the RSS is following them. But this is also a fact that the mentality that led to the division of Janata Party is still there and no political party of the country is exception to it,” he said.

Shri Kariya Munda said Nanaji left the impression of his work in every sphere he worked. I call upon the youth of the nation to work for the betterment of the deprived people of the country.

Shri Bal Apte said dual membership of RSS was said to be the prime reason behind division of the Janata Party. But it was not the only reason. “The credit to divide the Janata Party truly goes to Ch. Charan Singh. All those who played a role in the division of the Janata Party remained just the followers of some forces and they failed to become a formidable political force in the country. “What Nanaji did in his life, he did keeping his identity of RSS open. He always had an eye on future. That is why the book written by him in 1979 is still relevant,” he said.

By Pramod Kumar in ORGANISER

Swayamsevaks must be the medium of social change in the country: Mohan ji Bhagwat

Thu Aug 18 , 2011
RSS chief seeks battle against graft Ujjain, Madhya Pradesh: RSS Sarasanghachalak Mohan Bhagwat has urged office-bearers and representatives of Sangh Parivar to bring about a change in the society. He was addressing a gathering, SAMANWAYA BAITAK,  of 210 pracharaks and senior BJP leaders on Chardham Mandir campus in Ujjain on Wednesday. He said […] 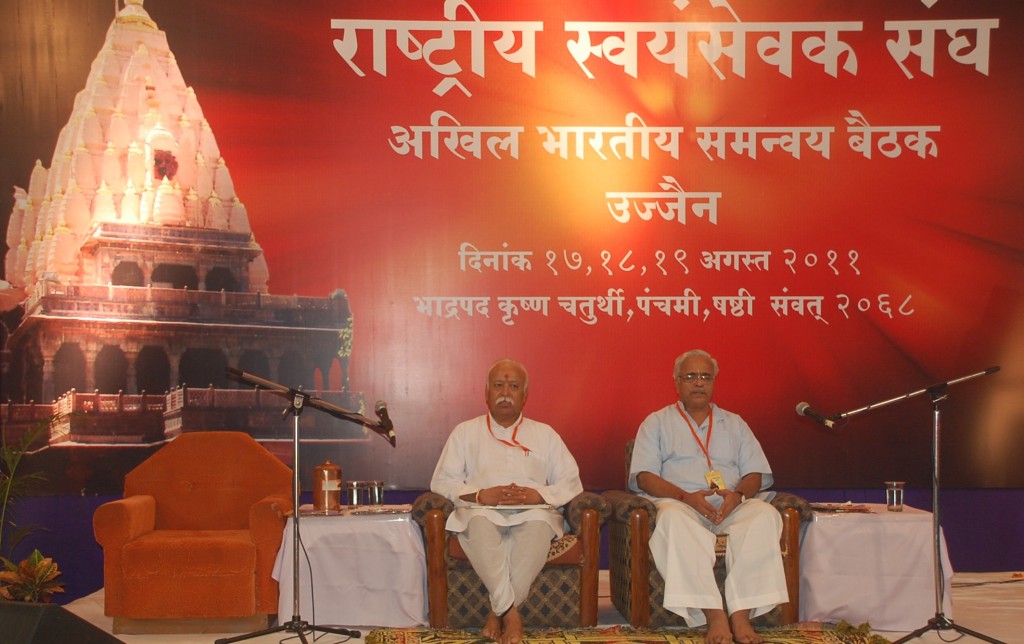