Need for a decisive blow against corruption

The Akhil Bharatiya Pratinidhi Sabha expresses grave concern over the endless chain of incidents of widespread corruption surfacing in the country. It is all the more shocking that the people occupying the upper echelons in the Government, including the Prime Minister are engaged in protecting their guilty colleagues till the end by describing them as innocent in spite of incontrovertible evidences pouring out against them.

The ABPS is deeply pained at the way the cases of corruption coming to light, day in and day out are tarnishing the image and reputation of the nation. The magnitude of corruption is such that not only the common man, but even the experts get bewildered. The gross misdeeds in organizing the Commonwealth games have gravely damaged the prestige of the country.  People at the helm of power are either turning a blind eye or taking steps against the guilty as an eye wash under the pressure of the judiciary and media. The country wants to know as to what was the compulsion and which invisible hand was behind the misdemeanor of the top rung of power in a most sensitive matter like the appointment of the Central Vigilance Commissioner.

Unfortunately, the influence of politics is growing in almost every walk of life and the instances of corruption indulged in by the people in seats of power in the post independence era are constantly on the rise. After the Independence, the country has witnessed public anger against corruption resulting in powerful mass movements. The J. P. movement of 1974-75 and imposition of emergency and the mass movement triggered by the Bofors scandal in 1987-1989 culminated in the change of power at the center. But, the change does not seem to have brought about any decline in corruption. On the contrary the form and dimensions of corruption seem to have become more complex and extensive in the wake of economic liberalization. Whether it is the share scandal of 1992 or the recent 2G spectrum scandal, mind boggling figures of money are found to be involved. What needs special mention is that the people involved in these ever increasing acts of corruption are the ones who are highly educated and belong to the affluent class of the society. All these facts clearly indicate that there is need for further intensification and expansion of the process of man-making.

In this regard the ABPS believes that there is a dire need to organise every rung of social order on the firm foundation of value-based and morally strong conduct of life rooted in the eternal principles of Dharma. This is possible only by reorienting education-system to reflect the national ethos and serve as an effective instrument of character-building and imparting noble samskars. At the same time it is imperative for the people in high positions that they present exemplary models of conduct in their private and public life.

Apart from these reforms of far-reaching consequences, reform in the system of governance & administration and mobilising effective public opinion in favour of that, is equally important. Transparency in governance, administration through minimum and simplified regulations, judicial system based on easy access and timely dispensation of justice, elimination of black money, electoral system capable of effectively curbing the criminalisation of politics and checking the growing influence of money power are a few reforms urgently needed. It is also imperative to ensure proper security for the whistle blowers who courageously expose corruption in the present system at different levels and to have stringent penal provisions against the corrupt. Indeed the poisonous creeper of corruption is responsible for all the contemporary social ills like inflation, unemployment and black money which has also been affecting the country’s development and the internal and external security. In connection with the problem of black money, the government should acquire black money stashed in the country and outside, declare it as the nation’s asset and deploy it for developmental purposes.

The ABPS appreciates the efforts of such courageous individuals, organizations ,  constitutional institutions, alert media and vigilant Judiciary for their efforts against corruption in the present challenging scenario and calls upon the countrymen to extend their active support for such noble endeavours with utmost personal integrity and also nourish our traditional social institutions actively involved in character-building of our citizens.

Wed Jun 8 , 2011
NEW DELHI: Seeking to mount pressure on the government, civil rights activist Anna Hazare on Wednesday observed a day-long fast at Rajghat and threatened another hunger strike from August 16 if Lokpal Bill is not passed by then, saying it was part of the “second freedom struggle”. The agitation saw […] 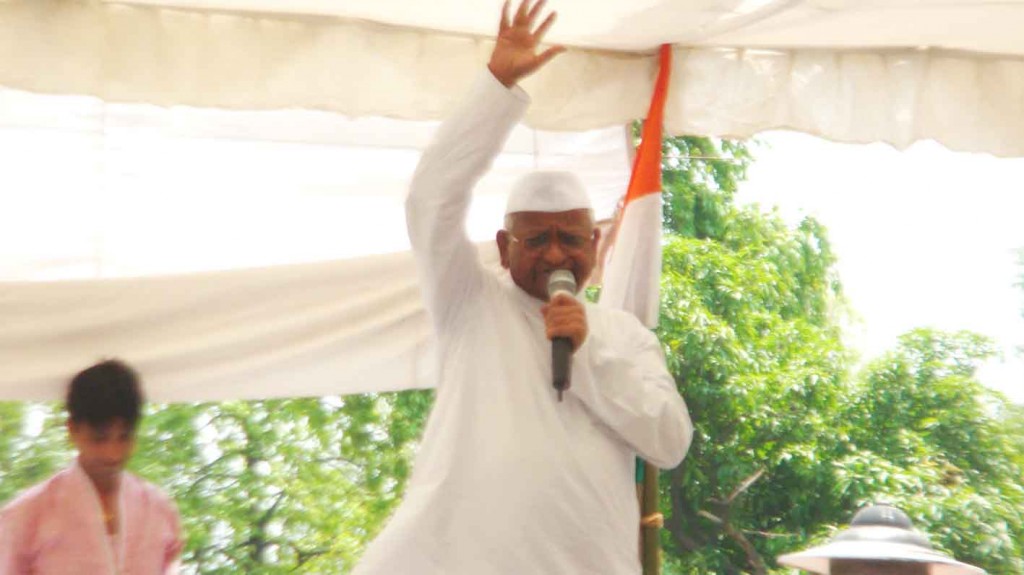