A memorandum submitted to Governor on Communal Violence Bill by RSS, Andhra Pradesh Date: 10/11/11
To
Sri E.S.L.Narasimhan
His Excellency Governor of Andhra Pradesh
Raj Bhawan
Raj Bhawan Road
Hyderabad- 500041
governor@ap.nic.in
T: (40) 2331-0521 F: (40)2331-1260
Dear Sir,
Sub: – Appeal to ensure withdrawal of NAC-drafted Prevention of Communal and Targeted Violence (Access to Justice and Reparations) Bill 2011.
—
Deeply concerned with NAC having come up with a draft bill seductively titled ‘Prevention of Communal and Targeted Violence (Access to Justice and Reparations) Bill 2011’, we are approaching you to kindly use your good offices to ensure that this bill is not proceeded with to be enacted as law.
2. From times immemorial, the civilization and culture of this country has always laid enormous emphasis on principles like “Vasudaiva Kutumbam” (Whole world is one family), “Sarve bhavantu sukhinaha” (Let all be happy), “Ekam sat, vipra bahudha vadanti” (Truth is one, scholars interpret in different ways) etc. These principles dinned into generations of Bharatiyas over several millennia have taught us respect for plurality, for differences in belief, worship and living known as Sanatan Dharma, enriched by great souls like Buddha, Sankara, Vivekananda and Mohandas Karamchand Gandhi, have made Hindus as individuals an d groups cherish Ahimsa, tolerance, harmony and peace amidst variety. Suppression of non-believers, oppression of dissenters, persecution of blasphemers, fatwas to kill, inquisitions are not the culture of Hindus . Murderous sectarian wars, prohibition of peaceful preaching of dissent or banning of non-disruptive propagation of different faiths are repulsive to Hindus . Therefore Hindus do not, by their very dharma, preach, start or sustain communal violence, riot and killing of “others’. They sing Eswar, Allah (yahvew) tere naam, affirming their belief in the on-ness of God in His many splendorous names, forms and attributes.
3. There is more to the bill than meets the eye from its title and the real objective of the bill is not what it claims to be. In the guise of protecting minorities, it assumes that the majority community i.e Hindus is always the initiator and perpetrator of riots and violence, anytime, anywhere they may happen in the country.
(This flies in the face of eth facts to the contrary. In her well researched book, “Politics of Communalism”, Zenab Banu, a Muslim scholar, had presented an analysis of 74 communal riots between 1953 and 1977. She came to the conclusion that nearly 75% of these communal riots were started by Muslims).
Another researcher Sri Ram Kumar Ohri, IPS (Retd) found that in the first four months of the calendar year 2006, there were six (6) communal riots, all on Fridays; 3-02-06 Dhar (MP; 10-02-2006 Leh (J&K);17-02-2006 Muzafarnagar (UP); 24-02-2006, Karwan locality of Hyderabad (A.P); 03-03-2006, Lucknow (UP); 10-030-2006 Bengaluru and 24-04-2006, Thane (MH).
The unwarranted assumption that the majority starts communal riots, subverts the secular foundations of India. The bill seeks to make criminal jurisprudence partisan and blatantly violates the principle of equality before law.
4. Inter-religious, and caste and communal and inter-linguistic amity and harmony should be carefully and consistently and ceaselessly promoted. Prejudicially presuming that the majority Hindu community always initiates anti-Muslim/Christian riots and therefore bringing a bill which legalizes this grotesque presumption is wrong; it will sow seeds of discord and intolerance between the presumed –guilty Hindu community and he assumed-innocent others. Trying to bring into force an utterly biased law, which confines its protective mechanism to persons and groups hailing from certain communities alone and distinguishes citizens in the eyes of law on communal and caste lines will only vitiate the atmosphere and sow seeds of suspicion and disharmony.
5. What is needed is that all communities in all regions of the country – whether they constitute a majority or a minority – are equally enthused and galvanized to pursue the larger national goal of unity in diversity. Strangely, far from promoting harmony, the NAC draft has the potential to wreck the prevailing amity among various religious groups and promote divisiveness. By making laws that are partisan and favour one community as against the other, the government would be doing a signal disservice to the idea of unity itself.
6. According to the provisions of the bill, whether a group is minority or majority would be looked at from state level. As you are well aware, a community which is a minority community in a State can be majority community at a local level. The highest number of religious riots in Andhra Pradesh have always started in the Old City of Hyderabad wherein a community which is a minority at state level is the majority community at local level there. But the protective mechanism under the proposed bill would be confined to that local majority community alone leaving the local minority community to a miserable fate.
7. That the bill is ill conceived and is indeed against Hindus only is evident from a few following examples:
8. The draft bill creates an extra constitutional body comprising of a majority of “minorities” which can recommend to the President, imposition of Presidents” rule on the charge that the state government has failed to prevent and control communal riots.
9. Besides the obviously anti-Hindu nature, the draft bill affects (i) the status of state governments, whose concern is law and order and (ii) powers of Governors who can make recommendations for Presidents rule.
10. Here are some fine points to illustrate other defects, not taken cognizance by the Bill.
11. The bill is drafted by the extra-constitutional National Advisory Council which in turn was advised by a large number of Muslims and Christians and known habitual Hindu-baiting, leftist nominal Hindus. This bill is a blot on federalism and secularism, to which India is constitutionally wedded. Justice demands that this bill be withdrawn forthwith.
12. We earnestly request you to kindly impress upon the concerned authorities to withdraw this shockingly biased and dangerously draconian legislation.
Thanking you.
Yours sincerely,
Name Details – Signature

Sun Nov 13 , 2011
Rajgarh (MP), Nov 13 (PTI) RSS chief Mohan Bhagwat today said it was “unfortunate” that Prime Minister Manmohan Singh had chosen to describe his Pakistani counterpart Yousuf Raza Gilani as a “man of peace”. At a gathering here, Bhagwat said the very existence of Pakistan was based on enmity towards […] 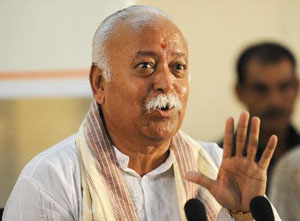