Gujarat RSS’s new chiefh Pranth  Sanghachalak , Dr Jayanti Bhadesia, has taken over from Dr Amrut Kadiwala as the head of the state unit of the Sangh. Dr Bhadesia is a surgeon and is perhaps the youngest chief of Gujarat RSS. He is tech-savvy and has three blogs. In an interview to DNA, Dr Bhadesia talked about his plans to take the work of the RSS further in Gujarat.

What would be your priority in Gujarat?
My appointment is the result of an established process of the Sangh and it is a responsibility more than a designation. The priorities of the RSS have not changed since its formation. Its working style and ideology will remain unchanged. The Sangh’s works keeping the nation and society at the center of its thinking. We will continue doing our work of preparing patriotic, physically fit, intellectually-sound swayamsevaks through the shakhas.

What challenges does Gujarat RSS face as an organisation?
The RSS in Gujarat does not face any challenges independent of the country and the society. The Sangh is part of the society and the challenges that our society and country face are challenges for the RSS too. We feel the proposed Communal Violence Bill, intrusion on the country’s borders, the politics of dividing the people into minorities and majorities, etc, are the major challenges facing the country.

How does the Sangh intend to attract young swayamsevaks to the shakhas, especially in urban areas and from well-off families?
Western lifestyle and self-centeredness are the main reason why the family as an institution is disintegrating in the country. This is particularly more evident in urban areas.

We believe the values and cultural traditions that are close to the soil can be inculcated in children and youth through the shakhas. We also inculcate these values at family meetings and college meetings where we talk about Indian family life,
education system etc.

What changes have you observed in the Sangh during your association with it?
There is no change in the philosophy and basic principles of the Sangh. New systems and dimensions have been introduced as the Sangh and its activities have grown. Earlier, there were only sharirik (physical activity),boudhdhik (intellectual discussion) and vyavastha (administration) sections in the Sangh.

But now sections such as seva vibhag (service wing), prachaar vibhag(publicity wing), and sampark vibhag (communication wing) have been introduced. Further, we are also using technology, news media, websites and magazines to reach out to people. But I want to say that nothing can be as powerful as our vyaktigat sampark (personal and individual interaction) for staying in touch.

The Gujarat assembly elections are scheduled next year. What would be the Sangh’s role in it?
Elections and political parties are not for the Sangh. A Sanghi is dedicated and focused to the work of building the nation by training patriotic individuals. We also believe that a patriotic and nationalistic party should be come to power in the country.

CM Narendra Modi was also a Sangh Pracharak. In the light of the RSS’s ideology, has he been successful?
The BJP is part of the Sangh’s political arrangement. Sangh is a bigger organisation which works at all strata of society to build a complete entity. Today we hear praise of Gujarat from across the world. The political situation keeps changing with time.

Thu Dec 8 , 2011
by Pradeep, Shimoga Vibhag College Vidyarthi Pracharak Made snana, is a ritual where the devotees roll on the plantain leaves with the remainings on them, after lunch !! This is practiced in Kukke Subramanya temple situtated in South canara district of Karnataka. Subramanya is a place which is not unknown […] 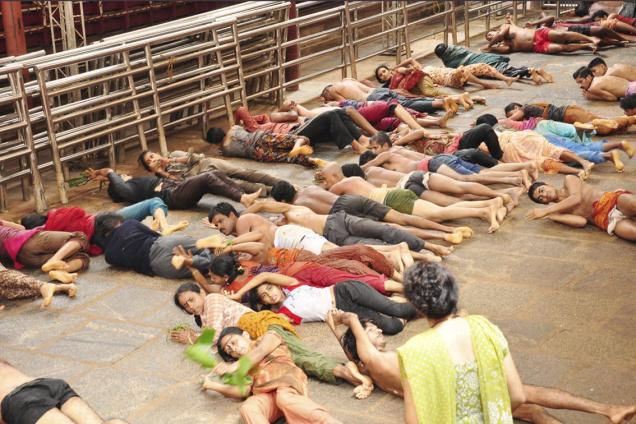