1) B S Yeddyurappa, the Chief Minister of Karnataka, though squarely indicted by the Lokayukta, dithered to put in his resignation papers. He seems to have thought that the BJP high command would, this time also, will be subdued by his threats. This did not happen. The party high command was firm. The party high-ups must have had full knowledge about the corrupt practices of BSY. Therefore the indictment by the Lokayukta, may not have come as a surprise. Shri Shantakumar, the former C M of Himachal Pradesh, and at present one of the vice- presidents of the party, had already conveyed to the party bosses about the iniquitous actions of BSY. Shantakumar was in charge of the BJP in Karnataka. So, he must have the first-hand knowledge of the situation there. At one time the BJP central leadership had taken the decision to ask BSY to resign. But the central leaders caved in before the threat of BSY to dissolve the State Assembly. Now because of the direct indictment by the Lokayukta the party high command put its pressure and BSY agreed to resign.

2) But BSY wanted his own protege to sucesed him. This too was not acceptable to the central leaders. And in consequence BSY forced the election.

We should congratulate the BJP for resorting to the method of secret ballot, to elect the leader of the Karnataka Legislative party. This is at variance with the unhealthy and humiliating practice in the Congress and may be to a lesser degree in the BJP also, of imposing a leader from above. The MLAs in the Congress party come together, not to elect their leader, but to pass a unanimous resolution to authorise the party-president to select the leader. Recently in Maharashtra, Prithviraj Chavan was selected for the post of CM of Maharashtra not by the MLAs, but by Mrs Sonia Gandhi. He was not a member of the Legislative Assembly. He had to become a member of the State Legislature within six months. But he too like the PM selected a softer choice and became a member of the Legislative Council. But why blame Shri Chavan? He was merely emulating the PM who too came to occupy his exalted post by entering the Parliament through a side door of the Rajya Sabha. Nobody seems to take note of the fact that this is against the spirit of our Constitution, though the Constitution is silent on this point.

In the long history of the Congress party, I remember only too instances, when there was election to elect the party leader. One was in 1966-67, when Smt Indira Gandhi was opposed by Shri Morarji Desai. In that election Morarjibhai was defeated and Smt Gandhi became the leader of the Congress parliamentary party and eventually the Prime Minister. Same time in the sixth decade of the last century Shri YB Chavan’s leadership was contested by Shri Bhausaheb Hirey. Election took place and YB Chavan won, and became the CM.

It is a misconception, that by forcing a leader from above, and making a semblance of unaminity, groupism in the party is eliminated. No. groupism persists. It just becomes latent, giving rise to petty conspiracies among the groups. It is always better for the health of a party or an individual that the signs become patent instead of curbing them inside. But this is anything but democracy. Maybe, the Congress high command thinks that this gives them greater leeway and additional strenght to curb the ambitions of the provincial leaders and thus avoid potential challenges to their supremacy.

Of course, unaminity of opinion is a virtue. It is laudable. And every party should try to evolve it by mutual consultations. But, when it is not possible, election by secret ballot is the best solution. It gives everybody an opportunity to prove his popularity and acceptability. It is also in the spririt of democratic value-system. But when once, the result of the election is out, there is an additional responsibility on both the factions that fought the electon. The winning faction must exhibit the broadness of their mind by inviting the leaders of the defeated faction to share the governance. Smt Indira Gandhi had inducted Shri Morarjibhai into her Cabinet, made him the Deputy Prime Minister and Shri Morarji too accepted the verdict and joined the Government. It is deplorable that the defeated faction of the BJP in Karnataka, did not show such magnanimity of mind and thought. All of them who voted for Jagdish Shettar were absent when the elected leader Sadanand Gowda was given the oath of office by the Governor. This is not only exhibition of their petty-mindness but also an affront to the democratic process. Let us hope that the defeated group corrects itself and offers full cooperation to the government and the elected group too does not get too elated to think that they alone are the whole party.

One more healthy symbol emerged from the Karnataka syndrome. The caste factor, the bane of Indian politics, did not play its role as advertised by the media. Yeddyurappa was projected as only a leader of the Lingayats. But his protege belonged to the scond largest community of Vokkaligas, while his opponent was of BSY’s caste. I am waiting for a time when media stops discussing the political affiliations and affinities on the basis of caste. Only the enemies of the country will be interested in indulging in magnifying these out-of-date irrelevant differences. Let us congratulate the high ups in the BJP for resorting to a democratic way to resolve a crisis and let us also hope that the Congrss too follows the same procedure. If the Congress and the BJP, the two largest parties put forth such wholesome examples, it is possible that the small parties too may be induced to follow their model. 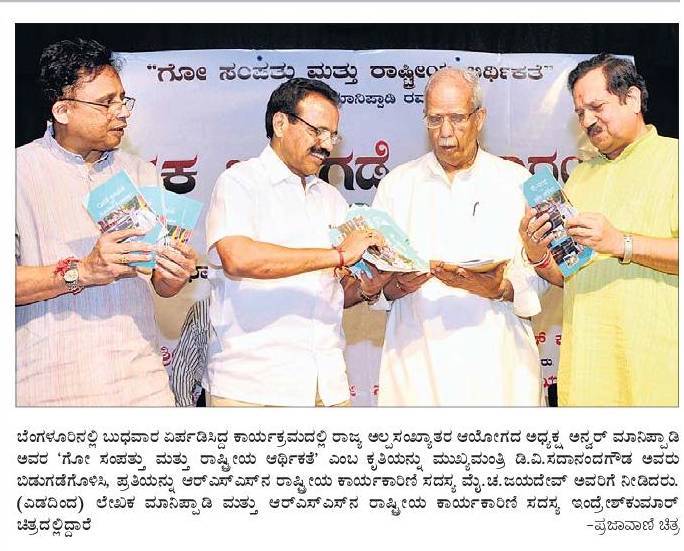