GANGTOK/NEW DELHI: The death toll in the powerful Sunday earthquake has increased to 80 with many people being killed in Sikkim, five in West Bengal, two in Bihar, seven each in Nepaland Tibet even as rescue and relief operations were stepped up in the affected areas. Over a hundred people have been injured in the 6.8 magnitude tremblor which has caused extensive damage to buildings and roads in Sikkim and several other places.The casualties have occurred mostly in the North District and in towns and villages like Rangpo, Dikchu, Singtam and Chungthang located along the course of Teesta river, they said.In Gangtok, power was restored this morning. Residents had spent the night outside their houses fearing aftershocks. At least 20 aftershocks throughout the night had created panic in the city. The road network and telecommunication system have been affected.

Meanwhile, rain and landslides have hampered the massive rescue efforts of hundreds of workers searching for survivors.

According to reports from Union home ministry, there are 16 landslides in a stretch of 10 km in Sikkim. Reports say several important roads in the state have been washed away and the main highway has been blocked.

Nearly 400 personnel of the National Disaster Response Force (NDRF) reached the Bagdogra airport on Monday morning. The NDRF personnel will be airlifted to the epicentre of the earthquake for the rescue operation. Five more rescue teams have also left Kolkata for Gangtok.

The earthquake has also triggered off landslides, blocking off nearly all roads towards Sikkim’s capital Gangtok. Personnel of the Border Roads Organisation (BRO) are working on a war footing to clear the blocked roads.

712 personnel of ITBP are already engaged in rescue and relief operations in Sikkim.

The Army has deployed a total of 72 columns including infantry troops and combat engineers, four Dhruv and five Cheetah helicopters.

IAF has deployed 2 C-130J ‘Super Hercules’ aircraft from Hindan airbase to Bagdogra, carrying 9 tonne of relief material and 200 National Disaster Relief Force personnel. One IL-76 plane hsa been sent from Agra to Bagdogra via Kolkata, carrying 8 tonne of relief material and 110 passengers. Also, an AVRO from Palam, with a 20 member Medical Team, 2 AN-32 medium lift aircraft from Agra, and 8 helicopters have been pressed into service for relief and rescue operations.

West Bengal chief minister Mamata Banerjee has left Kolkata for Darjeeling to hold a meeting with the administration at Kurseong at 3pm. Banerjee will be assessing the situation after the meeting in Kurseong with the top brass of the administration. She is likely to visit some worst hit areas in Darjeeling district and give necessary instructions for the rebuilding work.

Mamata Banerjee has announced compensation worth Rs 2 lakh to the family of the deceased. The West Bengal chief minister has postponed her election campaign in Bhawanipore to September 22, where she was supposed to hold a rally on Tuesday. Banerjee is looking to get elected from Bhawanipore assembly constituency in the assembly byelection.

Meanwhile, the quake was felt all the way to Delhi as well as in Bangladesh, shaking buildings. At least 10 people were injured and some buildings suffered minor damage.

Chinese state-run news agency Xinhua reported that at least seven persons have been killed and 22 others injured in Tibet in the quake which has caused landslides and has disrupted traffic, power and water supplies as well as telecommunication in Yadong County, an area 40 km away from Sikkim.

Three people were killed at Lainchaur in Kathmandu, two in Sunsari district, and one each in Dhankuta and Sankhuwasabha districts in eastern Nepal, according to home ministry sources in the Nepalese capital.

Mon Sep 19 , 2011
Ahmedabad sept 19: The 3 day Sadhbhavana Fast by Gujarat Chief Minister Narendra Modi came to an end today. Modi broke his fast today evening in the presence of his supporters, party workers and senior officers of state govt. The fast which began on Saturday dedicated  for peace, harmony and unity, was […] 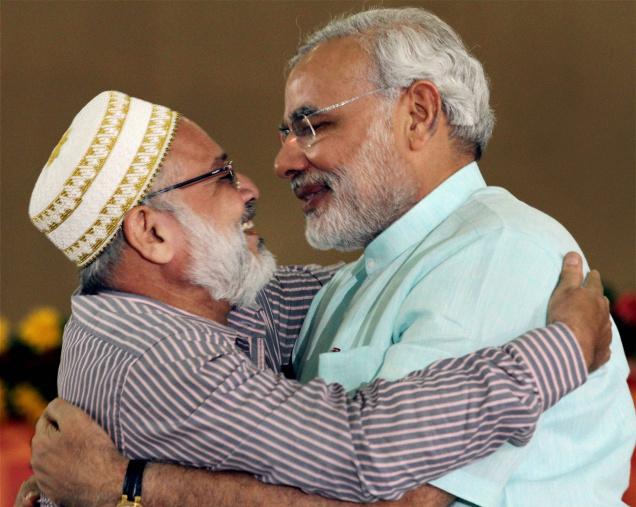