Koppal-Karnataka: How do you ensure the benefits of liberalization reach the poorest of the poor? Rajesh Bhat, who is just 27 years of age, runs The Head Held High Foundation, which is turning illiterate villagers into BPO employees. At the speed of 40 words per minute, Ramesh processes insurance forms. Ramesh and Yankamma try their best to meet the targets in the tiny rural BPO. Rajesh runs The Head Held High Foundation in Koppal, one of the most backward districts in Karnataka. The foundation’s purpose is to make executives out of young illiterate villagers.

“Our intention is to enable every villager, irrespective of whatever the background, caste, creed, religion to live a life of dignity with their head held high and give them an opportunity without charity,” Rajesh said.

In 2007, Rajesh, a software engineer, gave up his tech job and a fat paycheck at Onmobile, a Bangalore-based company, to meet minds with his mentor Sunil Savara. The two started an experiment that began with just eight people, including 18 to 22-year-old villagers who had little or no formal education and in over eight months, the results began to show.

After achieving sucess with the first eight, Rajesh and his friends opened the centre in Koppal. There, students often gather to sing out their lessons, they are taught English, Maths, logic, life skills and the basics of personal grooming.

Rajesh said, “We did something called village reach programme where people we trained went back to their villages and trained 900 kids in 31 different villages.”

It has not been an easy task as getting rid of the accent and perfecting the queen’s language is tough.

But Yankamma’s story adds faith. A fruit seller and a domestic help, she had come to the Koppal centre looking for a cook’s job. Today she teaches her son English. Also, while Ramesh may have spent his childhood grazing cattle, and working as a daily wager, today the BPO executive engages confidently with banks.

Head Held High has reached 113 students so far. After the training is complete, the students get inducted into the BPO setup at the centre itself. They have four major clients now.

Rajesh has big plans for the future. “In 2011, we’re looking at training 500 people from two different states. Our intention is to see whether we can work in the 100 most backward districts in India,” Rajesh said.

As Tagore wrote, “Where the mind is without fear, and the head is held high, into that country of freedom, may these dreams come to life.”

Techie, now a teacher of needy at Bangalore

Wed Aug 10 , 2011
Techie, now a teacher of needy BANGALORE: It all started one fine day, when Latha K R came across a group of kids while supervising the construction of her house in Poorna Prajna Layout. She saw the construction workers’ kids strolling around and playing all day long without indulging in […] 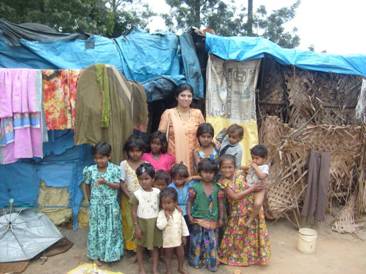