Local VHP leader shot at in Nagda in Madhya Pradesh

Ujjain, May 27 (PTI) A local VHP leader was today shot at by unidentified motorcycle-borne assailants at Nagda in the district, police said.

The incident occurred when the leader, Bherulal Daank, who runs a newspaper agency, was distributing newspapers himself as few of his employees had not turned up, City Superintendent of Police (CSP) Satish Veenu told PTI.

Two or three unidentified motorcycle-borne youths fired at him from a country-made gun and escaped, he said.

Daank was shot in the stomach and hand, and was taken to the district hospital first but was shifted to Indore’s Gokuldas Hospital after his condition deteriorated.

At present, his condition is stable and he is out of danger, the officer said, adding that the reason for the attack was not yet known.
source: PTI

"Till there is life in my body, I will keep fighting", Anna Hazare says at Bangalore

Fri May 27 , 2011
Bangalore: May 27: Anti-graft crusader Anna Hazare today warned politicians of unleashing people’s power if attempts were made to scuttle the passage of the Lokpal bill in Parliament. He said if there were impediments for its enactment, he would again sit on fast-to-death. At a public interaction here, Hazare said […] 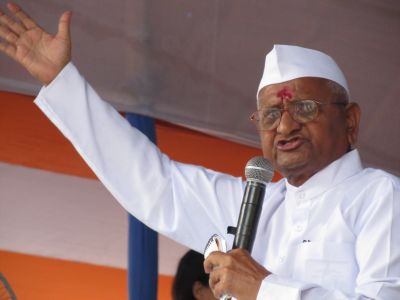