NEW DELHI: The Rajya Sabha on Thursday debated the Lokpal bill that was passed by the Lok Sabha two days ago.

Here are some of the quotes: * We don’t want a weak and hollow law. We are here today with the hope that the govt’s weak bill will be rejected by this House

* Parliament and politics both have great power and strength. We decide the laws of the country.

* There is a sense of the House but there is also a sense of the nation. And the people are looking to us for a strong law. We are being tested-can we rise to the occasion?

* I regret to say this is a half-hearted legislation

* Who wants a weak law, and who wants a strong one will be judged by the public. And it will not forgive whoever lets it down.

* You wanted to create a phony Lokpal and create a smokescreen that we are giving it constitutional status. Country does not need this sort of Lokpal. This is what you described as a gamechanger (dig at Rahul Gandhi).

* Ensure that you do not impede upon the rights of governments to form their own laws. Assure us that the autonomy of the states will be protected. Federalism and anti-corruption laws can co-exist

* You are creating an institution where you control appointment and removal mechanism. Change this procedure immediately and we will support you

* CBI functions have to be performed independently. Appointment of CBI director should be done with arm’s length. At least spare the CBI your predisposition for control

* Politicians have to be big-hearted. Your attempt to bring civil society groups, NGOs under Lokpal is a “revenge provision”. These are not public servants.

* My utmost respect for Pranab Mukherjee is not unknown. Fortunately for us he is not a lawyer so he can’t argue on both sides (Pranab laughs)

ON CLAUSE ON LOKAYUKTAS:

* You have created a new Constitution! Get a resolution from two states, frame a proper law, make it optional for those states that want it. Do it under Article 252-we will agree to it immediately. You have mixed Article 252 and Article 253-this is a constitutional cocktail

* Would have invited Jaitley to help gift us a strong Lokpal as a birthday present. But BJP is parsimonious in giving birthday presents. So don’t do it for our sake but join us in passing a Lokpal Bill for the sake of the nation.

* You are using conditionality as a pretext not to pass the Bill. If you don’t want to pass the bill, say so. Have the courage of your convictions.

* CBI is 70-year-old organization. Should birth of a Lokpal mean automatic destruction of every other institution? A 10-year-old CVC, a 70-year-old CBI?

* Thank God you did not say judgment must also come from Lokpal. You are creating a behemoth of unimaginable proportions. PM’s office will look like pygmy in comparison.

* You are creating breeding ground for corruption. You are making a body outside the whole system, with inherent conflict of interest.

* On your side as much as our side, CBI may have been interfered with. But with media entering 24X7 our bedrooms, you think it is possible-to control CBI?

* By talking of federalism, Jaitley wants to play “naarad muni” and appeal to some of our friends on our side. You are talking of assault on federalism. But this discussion on Lokayukta clause and Article 253 was discussed with everyone.

* Want to clarify for our friends on this side (TMC). Govt has bent over backwards and has already amended the law to say clause on Lokayukta will only apply with consent to states.

* We are both teetotallers but your “constitutional cocktail” doesn’t have any punch.

* History will not forgive you if you play politics as you have on constitutional status and Lokayukta issue. It’ll take you 30 seconds to pass this bill with minor technical changes. Or cat will be out of the bag and it is unseemly cat

* CBI has to be independent body and this is possible only when whoever is in power does not control it.

* We have taken a vow. We cannot pass anything that is unconstitutional

* Do not enact law against interest of states.

* Can’t tackle graft without including India Inc under review of Lokpal CBI should be freed from government control.

5:00 Shivanand Tiwari JD(U) * We should make a law so that the country remains united. This is a disease, worse than cancer, and we need to fight it.

* We support the Lokpal only if you let the states function independently.

* Trinamool Congress opposes Lokpal Bill in Rajya Sabha with respect to provision on setting up of Lokayuktas.

* Bill seeks to encroach upon authority of states which we are opposed to.

* Bringing Lokayukta under bill may be unconstitutional. It is certainly anti-federal If image of Chief Minister is affected, image of the country is also affected.

* Entire nation is looking at us. We shall be answerable to our future generations.

* Request government to delete Chapter 3 in its entirety from its bill. With these words I oppose the bill to the extent I have stated.

5:33 Ram Gopal Yadav (SP) * We oppose the bill. It has been incorrect from start to finish.

* First you take steps to make someone a hero. Then you let supremacy of Parliament be almost usurped.

* One who thinks Lokpal will route corruption is living in Fool’s Paradise.

* Lokpal will become the “nana” (grandfather) of CBI. It will be misued by the government even more.

* Chapter 3 is completely against federalism. We want it dropped completely.

* We support strong effective bill. But this bill lacks this strength.

* Corruption is not a discovery by Anna Hazare, it was discovered long ago. But he has brought out the consciousness of the public on the issue of corruption.

* When you (V Narayansamy) want to introduce a bill, please make it as sweet as possible.

Fri Dec 30 , 2011
Recently expired theatre personality Satyadev Dubey spent his childhood evenings at RSS Shakahas, here is an article in Business Standard: (http://business-standard.com/india/news/whenlights-dim/460254/) When the lights dim by Veenu Sandhu, BS New Delhi : Back in the 60s, when Hindi theatre was losing its steam, Satyadev Dubey gave it a fresh lease of life. Veenu Sandhufinds out […] 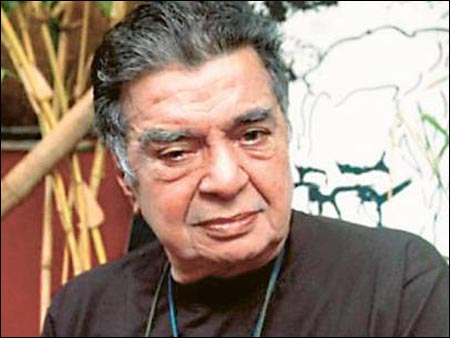