Marxists as US stooges CPI(M) leaders in Kerala could not have ever imagined that they would have to face an embarrassing situation like the one they are now facing following the publication by WikiLeaks of US diplomatic cables from New Delhi to Washington, DC that show the inherent hypocrisy of the revolutionary party committed to the so-called proletarian cause. The cables show that Kerala’s CPI(M) secretary Pinarayi Vijayan and his trusted lieutenants MA Baby and Thomas Isaac, both Central Committee members, had pleaded with US diplomats to encourage American investors to look at Kerala when the party was in power. If the cables truly reflect the interactions between US officials and the CPI(M) leaders, the latter have to do a lot of explaining to their cadre.

According to the leaked cables, Mr Isaac, who was Finance Minister in the 2006-11 CPI(M)-led LDF Government, had even gone to the extent of requesting representatives of American companies to meet him personally on investment opportunities in Kerala. Mr Baby, Education Minister in that Government, reportedly told American officials that VI Lenin’s economic programmes allowed import of foreign capital into post-revolution states. The ultimate irony is that all this happened right under the portraits of Joseph Stalin and VI Lenin at Mr Vijayan’s office at the State party headquarters, AKG Centre. Mr Vijayan and Mr Isaac have already confirmed that the discussions had indeed taken place. Still, they are trying to justify their attempt to woo the CPI(M)’s so-called class enemies by claiming that the modified party programme does allow the play of foreign direct investment in party-ruled States.

Incidentally, the CPI(M) is not the only party in Kerala to be affected by WikiLeaks. It has reproduced US Embassy cables saying PK Kunhalikutty, State Industries Minister and a top leader of the Muslim League, closest ally of the Congress, had been helping Islamist elements to grow in Kerala. But that is not going to help the Marxists in concealing their hypocrisy, which becomes all the more obvious when one remembers how they had attacked other parties and their leaders when WikiLeaks published cables on a daily basis showing how the Americans had tried to control policies in India.

The Marxist wholesalers of anti-imperialism had then said that such parties and their leaders had become pawns in the hands of American imperialists. But now the same WikiLeaks has hit them in the same way and they are defenceless. Mr Isaac apologetically said that not even a single penny had come to Kerala in the form of foreign investment during the five-year LDF rule. That same apologetic statement contains the unspoken message that this would not have been the case had the LDF returned to power!

Thu Sep 1 , 2011
An Indian JCO and three Pakistani soldiers were today killed in a heavy exchange of fire in Keran sector in north Kashmir after ceasefire was violated from across the border, officials said. Pakistan violated the ceasefire twice in Keran sector as Indian troops foiled an infiltration bid after exchanging fire […] 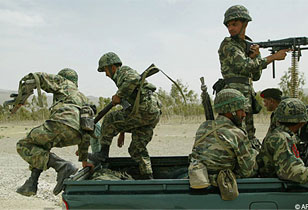